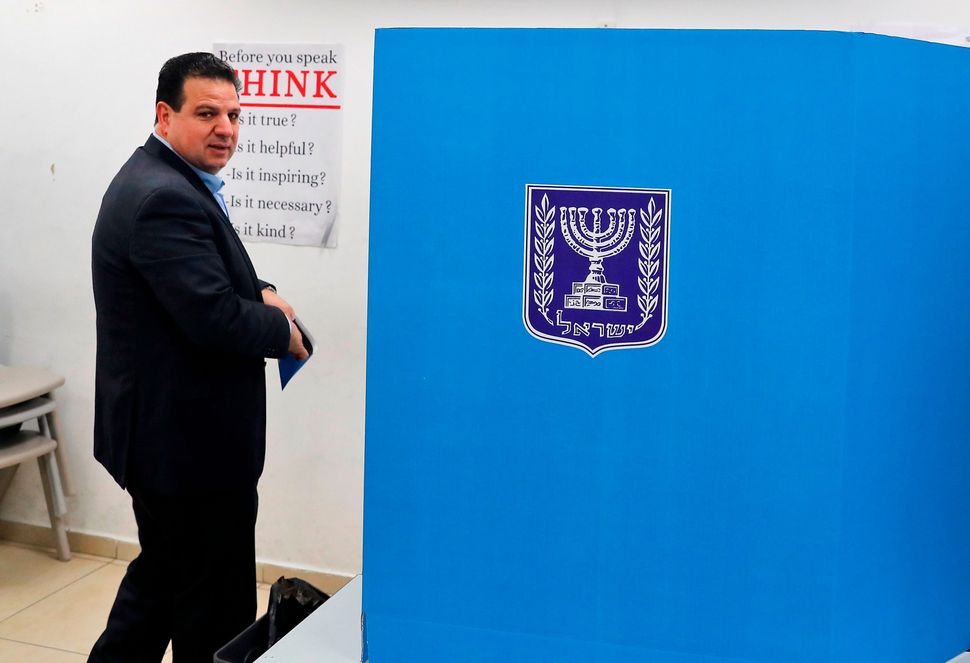 I am one of the millions of Israelis who are planning to vote in Israel’s national election on Tuesday — the country’s fourth in less than two years. This time around, 13 parties are competing; 11 are Jewish parties that span the political spectrum, and two are Palestinian-led: Ra’am and the Joint List, a coalition of three Arab-majority parties.

Polls show a larger-than-usual number of undecided voters, but my mind has been made up for months. As someone who yearns for Israeli policies to reflect Jewish values, I will be voting for the Joint List.

I am not alone as a Jewish Israeli in finding hope within the Palestinian-led Left. In the last election, in March, 2020, an estimated 20,000 Jews voted for the Joint List, up from 9,000 in the prior round, six months before.

When I began to explore my Jewish identity while an undergraduate student in Chicago, rabbis and educators constantly stressed our people’s longstanding commitment to justice, the sanctity of life and tikkun olam, a Hebrew phrase commonly translated as “repairing the world.” The Torah and other Jewish texts also emphasize the importance of welcoming the stranger; not being passive in the face of violence; and the belief that all humans are created in the divine image of God.

These values are not just abstract concepts or ancient commandments. Many of the American-Jewish leaders I looked up to and learned from actively spearheaded refugee resettlement, engaged in racial-equality work and boldly spoke out against political policies that would hurt vulnerable Jewish and non-Jewish populations.

I moved to Israel in 2018 to study in an egalitarian yeshiva and deepen my understanding of Judaism. In class, I encountered texts that reiterated the Jewish values I had previously learned. But as I explored my new home, I quickly realized that the Israeli government and its leadership were operating under an entirely different values system — one I believe is guided by nationalism, realism and ethno-supremacy, rather than the 3,000-year-old teachings of our tradition.

I didn’t board my one-way flight to Tel Aviv clueless — I knew that Prime Minister Benjamin Netanyahu and his coalition are right wing and that Israel has been straying from its social-democratic roots for decades. I believe their policies do not quite reflect Judaism’s emphasis on justice, considering that Ethiopian-Israelis experience police brutality and disproportionate arrest rates; LGBTQ couples cannot legally marry inside the country; non-Jewish migrants seeking asylum or refugee status are often turned away; and despite holding citizenship, Palestinians within Israel still face a multitude of inequalities, including higher poverty levels and lower life expectancy.

Many who defend Netanyahu’s government and policies say that Israel, like any other state in the world, is bound to have problems and should not be held to a different standard just because it is the Jewish homeland. That’s certainly true, but immigrating to Israel made me realize that no other state in the world violates the teachings of the Torah in the name of Jewish safety, security and prosperity.

Unlike many Israeli politicians, the Joint List’s charismatic leader, Aymen Odeh, has been an outspoken advocate for justice and has repeatedly emphasized his commitment to not only bettering the lives of Arab-Israelis, but of all Israeli citizens.

Odeh, who was first elected to the Knesset in 2015, has promoted policies that would allocate more funding toward preventing violence against women, expanding pensions and reducing gun violence. At protests in the streets of Israel and on the Opinion pages of The New York Times, the Joint List leader has also consistently called for negotiations to resume between Israeli and Palestinian leaders, and for all of Israel’s citizens to live in security and prosperity through a shared society.

There are a few Jewish parties that, like Odeh’s, advocate for advancing democracy, equality and social-democratic economic policies. What the left-wing Jewish parties lack is the courage required to put aside political differences and prioritize their constituents by consolidating their power into a single coalition. Odeh has vocalized his willingness to join a Jewish-led, center-left government in the past and has yet to be taken up on that offer.

The Joint List isn’t perfect. There are individual politicians in the three parties comprising the coalition that are undeniably problematic and, like their Jewish counterparts, spew toxic expressions of nationalism, homophobia and other harmful ideologies that contradict the Jewish values informing my vote. However, these politicians are a minority and their willingness to join the Joint List is a gesture of leadership and humility that the Jewish left could learn from.

One of my favorite Jewish teachings comes from the First Century sage Rabbi Tarfon, who is quoted as saying, “You are not obligated to complete the work, but neither are you free to desist from it.”

While the structural and societal problems that plague the Jewish state won’t be single-handedly remedied by the next government, I do feel obligated to cast my vote for the party that exemplifies the teachings that the Jewish people have cherished and been guided by for thousands of years — even if that party isn’t Jewish itself.

Abby Seitz is a freelance journalist based in Jerusalem and an MA student at the Hebrew University of Jerusalem. Follow her on Twitter at @abby_seitz.