When it comes to race, American Jews must do a better job pursuing justice 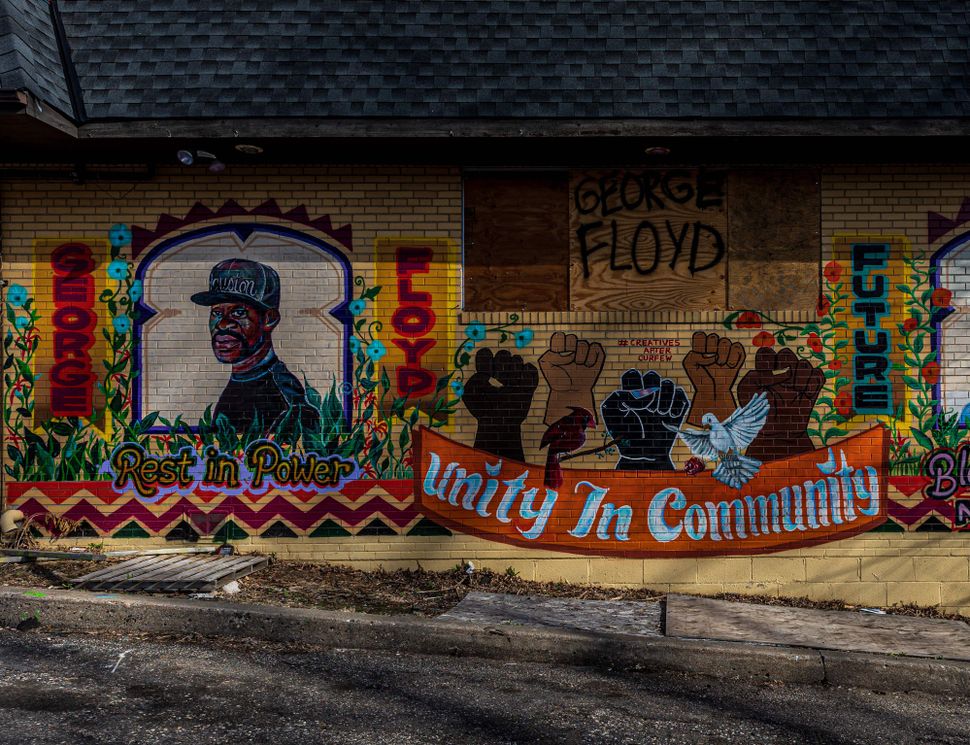 A mural honoring George Floyd and “Unity in Community” near “George Floyd Square” on March 30, 2021 in Minneapolis, Minnesota. By KEREM YUCEL/Getty Images

Last month, the House of Representatives passed the The George Floyd Justice in Policing Act, a law designed to transform the way law enforcement interacts with Black communities nationwide.

Especially as the trial of George Floyd’s killer, Derek Chauvin, gets underway this week, it’s an important step to ending police abuses of Black people, and disregard for Black lives. And there’s no doubt that the widespread protests of last summer following the killings of Floyd, Breonna Taylor and too many others brought about the passage of this act.

Such is the power of protest, even in the midst of a global pandemic, when millions of people of all colors, backgrounds, beliefs and religions came together to call out for justice.

And such is the power, in my life, of one of the fundamental precepts of Judaism — the concept, from the Book of Deuteronomy, of “tzedek, tzedek, tirdof,” or “Justice, Justice, you shall pursue.”

As a Jew, I have heard this phrase my whole life. As an African American, I feel this exhortation deep in my essence.

I was born 23 years after my Uncle Terrell was shot in the back by a Chicago police officer. His crime? Getting caught joyriding in the wrong neighborhood not long after getting his driver’s license.

He never walked again, and after prolonged suffering, he died years later from his injuries.

The cop who shot Terrell was never brought to trial, never even relegated to desk duty. He collected his pension and lived out his natural life. Is this the justice that we’re taught to pursue?

Terrell’s death became a cautionary tale for my family: this is what could happen if you ran from the police, even if you were afraid of them. When we all started driving we stayed in the neighborhoods we knew. There may have been shootings and violence where we lived, but we still felt safer there than in the modern sundown towns of the greater Chicago area.

I always learned that the bad guys were supposed to be punished for the crimes they committed. But in reality, the only people I saw being punished looked like the people in my family and in my community. Like me.

Yet I knew that we weren’t the bad guys, even if we were always treated as if we were.

But we’d seen what being vocal could get us. So Black people learned not to speak up. In Chicago, we didn’t rise up when Fred Hampton and Mark Clark were assassinated by the police, because we worried that their fate would become ours too.

Since then, all across the country, we’ve seen Black people continue to be shot at traffic stops, hanged in jail cells, bombed while they slept and choked to death on the sidewalk.

My question: How could this happen in a country where there are Jews who are pursuing justice?

We Jews are no strangers to injustice. So isn’t this our fight too? Or has the pursuit of justice become another empty slogan?

Being both Black and Jewish, to grow into a place where I understood I could pursue justice for others — even if I still was so badly in need of it myself — I had to first overcome the helplessness with which this system has saddled us.

I am fully aware that I, too, can be killed at a routine traffic stop, or murdered in my bed while I sleep because I am Black.

But I am also a Jew. I have to pursue justice for my uncle and all of those who have lost their lives at the hands of those who are sworn to protect us.

Jews aren’t supposed to pick and choose for whom we pursue justice. But it seems that in recent years we’ve allowed our Americaness to supersede our Jewishness. I have seen the Jewish community, like much of America, remain silent more often than it should. Sometimes I think we believe it’s enough to hold on to the horrors and atrocities that our ancestors suffered. But being a Jew is really about making sure others don’t suffer those same atrocities. Not on our watch.

We all are now standing face to face with the white supremacy that has been stoked since the beginning of the Trump era. And it’s important to remember that people who are putting their knees on the necks of Black people are as ready to turn on whites who don’t support their racist agenda.

But committing to a new fight for justice isn’t just about protection. It’s about radical love for this country — love that, the George Floyd Justice in Policing Act reminds us, can move mountains.

African Americans would be more than justified to seek retribution for the evils that have been perpetrated against us since we were brought to this continent in chains. From chattel slavery to Jim Crow to segregation, discrimination and mass incarceration, we have been shown time and again that our lives are expendable.

Yet we still love America and want to be full and equal participants in American life. This is why we pursue justice. For Fred Hampton and Mark Clark. And George Floyd and Breonna Taylor. For my Uncle Terrell.

As Jews we must support this endeavor too. Before any more lives are lost, justice must be obtained.

Tamar Manasseh is the founder and President of MASK, Mothers and Men Against Senseless Killings.

When it comes to race, American Jews must do a better job pursuing justice