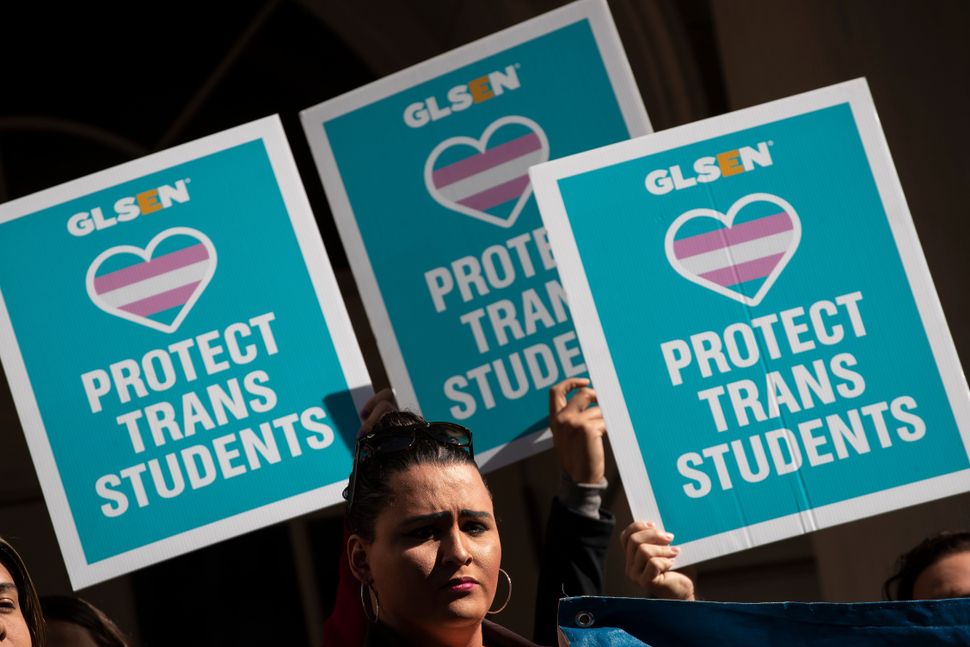 Last week, the Arkansas legislature overrode the governor’s veto to implement a heinous law that would ban gender-affirming healthcare for transgender and non-binary youth in that state.

I want to share my own gender story so you can hear how access to trans-affirming health care has allowed me to live my own authentic truth. 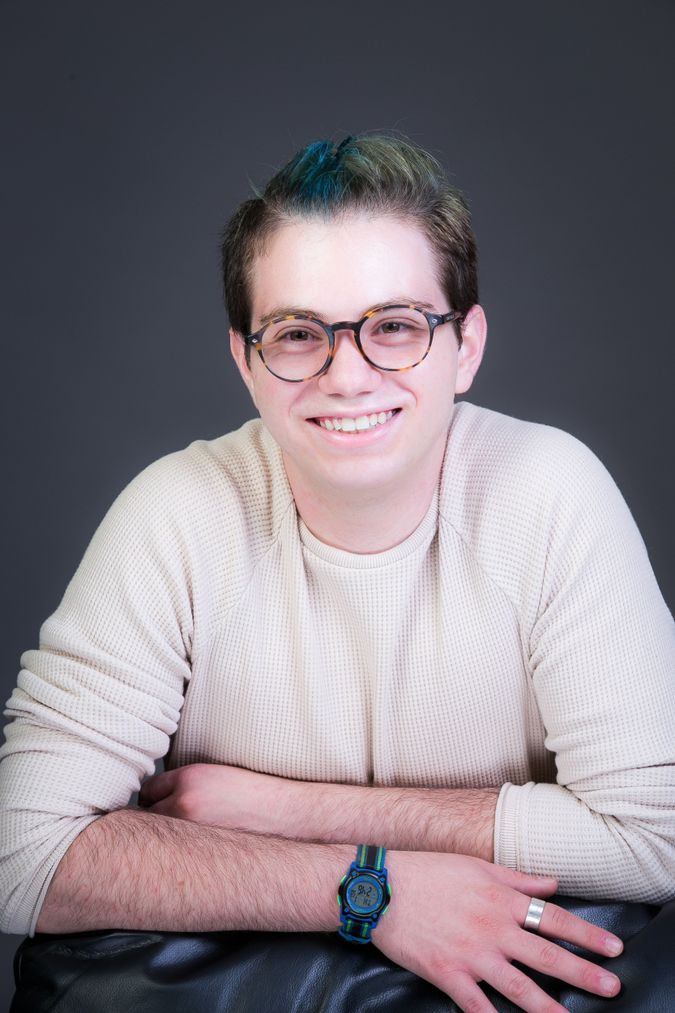 Five years ago, I was miserable. I was falling behind in school and lacking motivation to do things I once loved. I didn’t want to keep living.

I didn’t understand why I felt the way I did until I discovered the word transgender.

Knowing that there was a word for how I felt let me know I was not alone. That discovery helped me understand that I was living life as a person that I knew I wasn’t.

Afraid that I wouldn’t be accepted or that I would have my feelings dismissed, I struggled to come out. It took a while for me to fully express to others what I felt on the inside, but once I had the language, it became easier.

At 15, I began my social transition. I cut my hair, changed my wardrobe and name, and asked those around me to use the pronouns that felt best to me. I was no longer miserable, but something was still off. I knew that in order to feel fully comfortable, I needed not only to socially transition, but to transition medically, as well.

It took some time for my parents to process, but once they understood that it wasn’t something that I just wanted but what I needed in order to be happy, they were fully on board.

So, when I was 16, my parents and I went to Howard Brown Health in Chicago to begin discussing my medical transition with doctors, a process the clinic describes as “a collaboration between youth, their parents, and their medical and mental health providers.” On April 21, 2017, around five days after my initial consultation,I began testosterone, often referred to as T. A little over a year later, I underwent top surgery, alleviating most, if not all, of my dysphoria. I was finally able to take my shirt off in public and shower without cringing inside from discomfort.

Going on T not only masculinized my voice and redistributed muscles and fat around my body, but most importantly, allowed others to perceive me in the way that I saw myself. In just two weeks, it’ll be my four-year anniversary of being on T and starting my path to happiness.

If I hadn’t medically transitioned, I don’t think that I would be here today. This is the life-saving treatment that the Arkansas law would prevent other teens from accessing.

Medically transitioning saved my life, and it has saved the lives of countless other trans kids. Preventing trans youth from pursuing a medical transition is not only unjust and inequitable, it actively undermines trans lives and will ultimately end in more lives being lost.

This is why the American Society for Pediatrics and so many other medical organizations oppose this and other anti-trans legislation. With anti-trans bills on the rise — by early April, according to the ACLU, 28 states were considering anti-trans legislation — and one already passed, it is incredibly important to understand the effect this has on trans youth, regardless of where they live.

The Arkansas bill, HB 1570, goes by the name of the “Save Adolescents from Experimentation,” or SAFE, Act.

The bill prevents healthcare providers from prescribing puberty blocking and hormone altering medication to those under age 18. The bill also prevents transgender youth from accessing gender affirming surgeries. In short, it makes it illegal for trans kids in Arkansas to medically transition.

This, to me, sounds like the inverse of a bill focused on “saving children.” According to supporters, the reason for this drastic measure, which runs counter to all accepted medical advice, is because “Arkansas has a compelling government interest in protecting the health and safety of its citizens, especially vulnerable children.”

The bill will do exactly the opposite — not protect the health and safety of trans youth, but rather put them in further danger.

Even if the bill had not passed, the mere act of debating trans youths’ rights to be themselves deteriorates the health and safety of trans kids. It is traumatizing to have your rights and the validity of your existence disputed. Preventing them from pursuing medical transitions will make things worse; the Arkansas organizer Willow Breshears told Time “I heard from the mom of a trans kid that if this bill passed, that her child was going to kill themselves.”

Whether or not they are in Arkansas; whether or not they plan to medically transition; trans youth around the country are in pain. It hurts all of us to see politicians push an agenda that could ultimately cost us our lives.

Preventing individuals from expressing who they are clearly leads to psychological problems. A recent, detailed review of more than 70 studies found that transgender individuals denied access to treatment for dysphoria face increased risk of health consequences, including higher risk of depression and anxiety. “The health and well-being of transgender people can be harmed by stigmatizing and discriminatory treatment,” the review concluded.

There is a value in Judaism that is concerned with both physical and emotional wellbeing: Briyut, or health. The mitzvah of briyut is not limited to health professionals, but incumbent upon every Jew. Briyut is one of the only Jewish values that takes precedence over any other, emphasizing its importance in our lives.

Supporting transgender people in their identities, and specifically transgender youth, is encompassed by that mitzvah.

Trans youth need our support now more than ever. We need to know that there are people out there for us.

I am fortunate to be an intern at Keshet, a national organization working for LGBTQ equality in Jewish life. In response to the more than 100 anti-trans bills pending in state legislatures across the country, Keshet has launched a bi-weekly open processing space for trans and non-binary teens, which I facilitate. In the most recent session, a 17-year old nonbinary participant said “it’s like they’re choosing cis bodies over trans lives… is what it feels like.”

It hit me then that those teens are being forced to grapple with losing their rights rather than just getting to be kids. Kids who are in middle school and high school should be focusing on their lessons, not legislation.

How can those in the Jewish community fulfill the mitzvah of briyut, and be allies to trans youth?

Check to see what anti-trans legislation is being voted on near you, and call the appropriate political officials to share your opposition to those bills. Strengthen your understanding of the complexities of gender identity and challenge your assumptions. Even proactively asking someone what their pronouns are rather than assuming — and offering your own — can make a significant impact. Consider how the schools, community centers, synagogues and camps your family attends do or do not affirm transgender people, and seek out workshops and trainings, like those offered by Keshet, to make a clear plan of action to elevate LGBTQ equality and inclusion in your community. Follow and learn from transgender and Jewish activists on social media, and back organizations that support trans youth

And if there are trans people that you know and love, be there for them and let them know that you are there to listen if they need support.

For any trans and non-binary Jewish youth who may be reading this, and are feeling scared or in need of support: you are not alone. Please join me at Keshet’s trans and nonbinary processing space every other Thursday. Trans and non-binary youth ages 13-18 can register here to talk with and support other teens like them.

Sawyer Goldsmith, (they/them) a second year at JTS/Columbia, is currently serving as the Youth Programs Intern at Keshet, a national organization working for LGBTQ equality in Jewish life. Find more information at keshetonline.org.