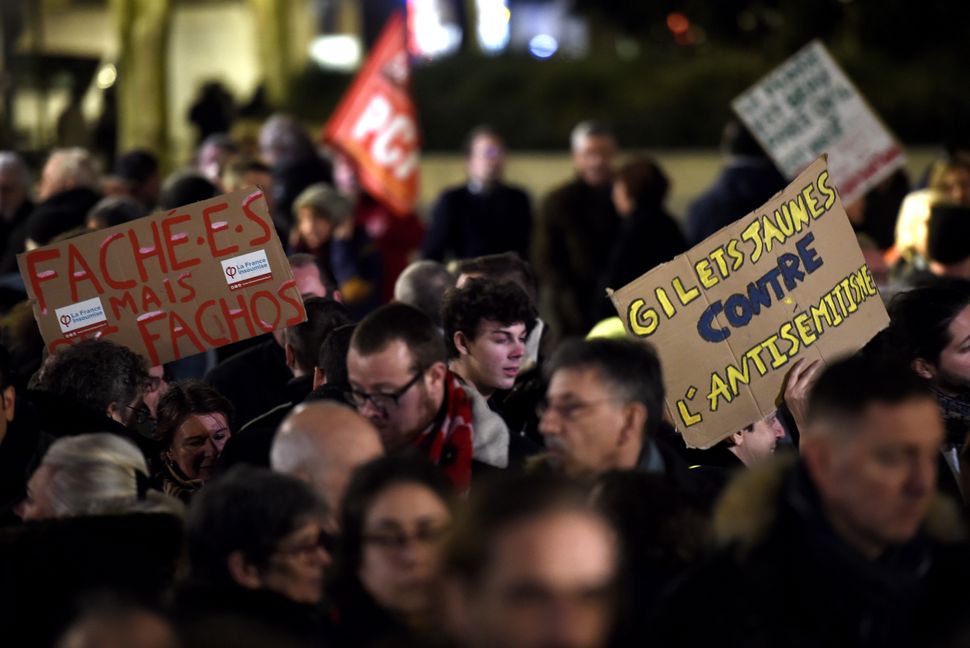 French Jews protest flare up of antisemitism in 2019. Photo by FRANCOIS LO PRESTI/AFP via Getty Images

On Israel’s Independence Day last week, I rushed with my 9-year-old son, Noam, to the Tel Aviv beach to watch the Israeli air force’s annual show.

As we walked through a playground and past a busy road by a car-rental company, we heard people in the crowd chattering in at least seven different languages, most of them and showing off their Jewish and Israeli pride with blue-and-white hats, horns, shirts and paper-chain necklaces.

I am not normally a man of Israeli national pride — I left Israel after my Army service, and have been living in New York and then Berlin for more than 20 years. But I came back for about a month with my wife, who is German, and two kids, because here we were able to get the COVID-19 vaccination right away instead of waiting a few more months in coronavirus-ridden Germany.

While we sat on the beach watching the group of planes showing off Israel’s abilities and strength, I got a news alert from Paris about Sarah Halimi, the retired Jewish doctor murdered in her apartment four years before. The final French court of appeals had ruled that Halimi’s killer, Kobili Traoré — a Muslim immigrant from Mali who lived in her building — was not eligible to stand trial.

The contrast between what I saw on the skies and what I read on my smartphone at the same time was mind boggling — like living at the same time as a Jew in the diaspora and in our homeland.

Halimi, who was 65, was murdered only because she was a Jew. What irritated her killer, according to one psychiatric report, was the mezuzah on her door. Now it seems the French authorities are not going to let her even rest in peace.

In April 2017, after smoking cannabis, Traoré broke into an apartment near his own in Belleville, a Paris neighborhood known for its cultural diversity. Fearing the intruder, the residents of this apartment hid in their bedroom, locked the door, and called the police.

But some reports claim that authorities first went to the wrong building. Meanwhile, Traoré climbed through the balcony to Halimi’s third-floor apartment.

She was apparently the only Jewish resident of the building. By the time police arrived at the site, the dispatcher instructed them not to intervene, recommending they wait for a special unit to handle the situation.

Traoré beat and kicked Halimi while she screamed for help. He threw her out the third-floor window, declared that he had killed the devil and shouted, “Allahu Akbar” — Arabic for “God is Great.”

The judge in charge of the case found that Traoré was unaware of his actions, due to his cannabis usage and subsequent state of delusion.

Effectively the French judicial system is asking us to believe that a man was so high that he became unaware of his actions but was nonetheless able to climb a balcony, kill his only Jewish neighbor, throw her out the window, and then celebrate this operation as a religious triumph.

The same judge also ruled that the murder lacked an antisemitic motive, and said it was her duty to protect Traoré from the “hostility of the Jewish community,” which was trying to use diplomatic and media pressure both in France and in Israel to force a hate-crime trial. These efforts by Halimi’s lawyers, family and the broader Jewish community got support from the media, much of the French public and even President Emmanuel Macron, but prosecutors remained unable to convince the court that the murderer was mentally fit to stand trial.

The news alert I got while on the Tel Aviv beach celebrating Israel’s independence declared the case over for good. French taxpayers’ money will now to go to help Traoré recover from his addiction to drugs and pay for his stay in a psychiatric ward. At some point, he will return to the French society. Meanwhile Halimi’s family and former patients and friends will never get to see her again.

And this case is hardly an isolated one.

In 2015, a judge in Germany gave three suspects a suspended sentence for burning a synagogue in Wuppertal after they said the act was not motivated by antisemitism but in protest against Israeli policy toward the Palestinians. In 2017, in Sweden, a judge withheld the deportation of an illegal Palestinian immigrant after he was found guilty of burning down a synagogue, out of concern that if he returned to his hometown, Israeli secret forces would go after him.

It is getting harder and harder to wear a kippah or other Jewish symbols or to speak Hebrew in public in Europe, including where we live in Berlin.

At the Tel Aviv beach, Noam asked me why nobody was hiding his kippah, and why there were so many people wearing Stars of David. Four jet planes made a beautiful formation in the sky and then dove toward the crowd — only to lift their noses at the last minute. Everyone was clapping like crazy, there was a real sense of pride and independence. The overarching feeling was, “Here, no one will tell us what to do, what to wear and how to speak.”

I let go of the years-old string stopping me for being proud of my Israeliness, and I started humming Jewish and Zionist songs.

I thought that I just came to Israel to get vaccinated. But I realized while here that I came to show my son that he is another link in a thousands-years-long chain, and that there is one place, only one, that he can be whoever he wants to be without fear or shame.

Ze’ev Avrahami, a chef, owns Sababa Restaurant in Berlin, where he lives with his wife and two children. He writes regularly for the Israeli daily Yediot Aharonot. Follow him on Twitter @zeevny.