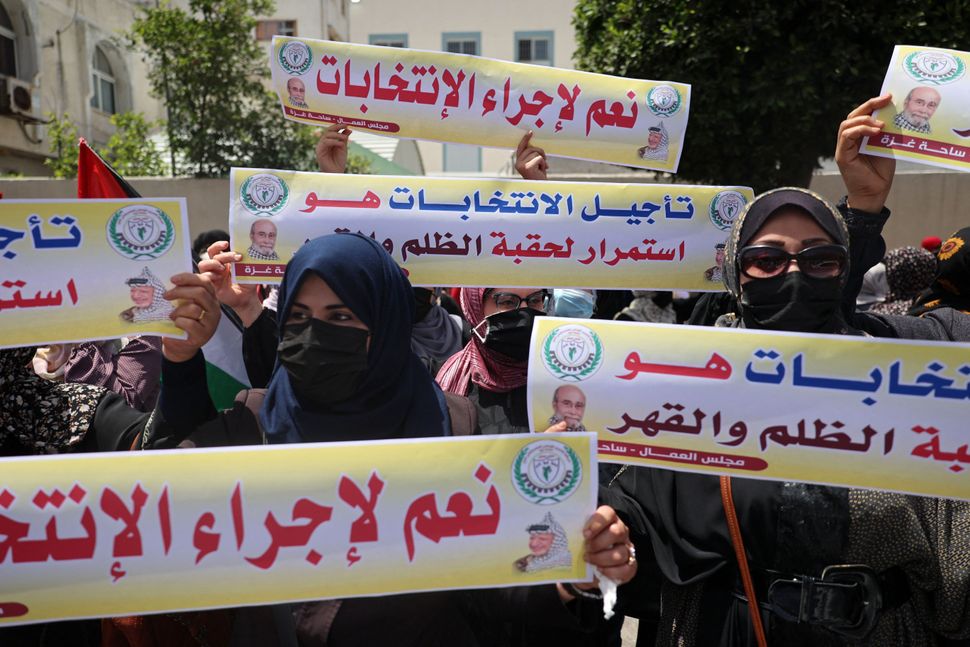 After years of hibernation due to internal conflict, Palestinians were expecting to head to the polls on May 22 to choose local representatives to the Palestinian Legislative Council (PLC) — until those elections were (again) postponed indefinitely by President Mahmoud Abbas last week.

Those who preach to Palestinians about democracy, including Americans and others in the international community, must take an active role in an effort to ensure these necessary elections take place.

The PLC, a 132-member council aimed at regulating life for Palestinians in the West Bank, including East Jerusalem, and the Gaza Strip, was created through the Declaration of Principles, often referred to as the Oslo Accords, signed at the White House in 1993. That agreement was supposed to serve as a five-year interim solution until an independent Palestinian state was established. It has, unfortunately, become near permanent.

Palestinians were so eager to participate in the upcoming elections, the first since 2006, that a staggering 94% of all 2.35 million eligible voters had registered, according to the Palestinian Central Election Commission. Nearly 1 million of them would have been voting for the first time.

Why did Abbas put the elections off, despite this overwhelming enthusiasm?

Some Palestinian officials close to him worried that their limited monopoly on power could be diminished by the results. When it became apparent that was likely, they looked for excuses to delay or cancel the balloting. Israel’s refusal to affirmatively state that it would allow Palestinians living in East Jerusalem to participate became the justification for scrapping the entire election.

To guard against militants in the Hamas movement taking control of the PLC, the elections were to have involved a new requirement for proportional representation. No one party or list was likely to achieve an absolute majority, which meant that Abbas’s Fatah would need to reach agreements with others to form a coalition that would diminish the party’s existing limited monopoly. A national unity coalition would actually be valuable, and its creation could speed up the end of Hamas’s secessionist efforts in Gaza, but might also give Hamas a foothold in the West Bank. Yet altogether, these causes for fear are less significant than the benefit of having new blood and a legitimate representative government.

Israel made no official comment on the vote, but its police have acted to stop any effort by Palestinians in Jerusalem to organize themselves, which is troubling.

An East Jerusalem news conference planned by three candidates affiliated with the Palestinian Liberation Organization was broken up by the police on April 17. The candidates were arrested, and though they were quickly released, many observers interpreted the event as a tacit signal that Israel would not meet their demands for open political activity.

Restricting such activity would be a violation of the Oslo Accords, by which Palestinians in Jerusalem are allowed to participate in national elections, although they must vote as absentees using Israeli-run post offices.

Before Abbas delayed the elections, the U.S., like Israel, took no official position on them. The leading Palestinian newspaper, Al Quds, cited an unnamed Washington source saying that the Biden Administration “wouldn’t object” if Palestinians decided to postpone elections because of the pandemic or “political complexities.” It was a strange statement to come from a Democratic administration that is championing the right to vote at home.

Now that Abbas has in fact postponed the poll, with no clear outline of when his government might allow it to proceed, the U.S. must stop such evasive maneuvering and take a firm line in advocating that the elections move forward.

Palestinians of all walks of life are in favor of the elections, particularly because they offer a potential path to reconciliation and the end of the division between Gaza and the West Bank. The leading factions, Fatah and Hamas, and smaller lists, like that headed by former Prime Minister Salam Fayyad, have all committed to forming a coalition government that would work to unify the Palestinian territories and end the existence of two parallel governments, with two sets of security forces and laws.

The international community, including and especially the U.S., should welcome and endorse this effort rather than obstruct it.

That is particularly the case given the prevailing inertia in addressing the Palestinian-Israeli conflict. Palestinian elections are an important avenue to bring about new and legitimate Palestinian leaders who can engage with Israelis to bring about peace. They may not be a high priority for Israeli and American leaders. That does not mean they are not a needed step forward in bringing some resolution to this decades-old purgatory.

Palestinians yearn to have a say in their own future. Washington — and Tel Aviv — should act to ensure that the democratic process be quickly rescheduled, and allowed to unfold without any hitches.

Daoud Kuttab, a Jerusalem resident, is an award-winning Palestinian journalist and former Ferris Professor of Journalism at Princeton University. Follow him on Twitter @daoudkuttab