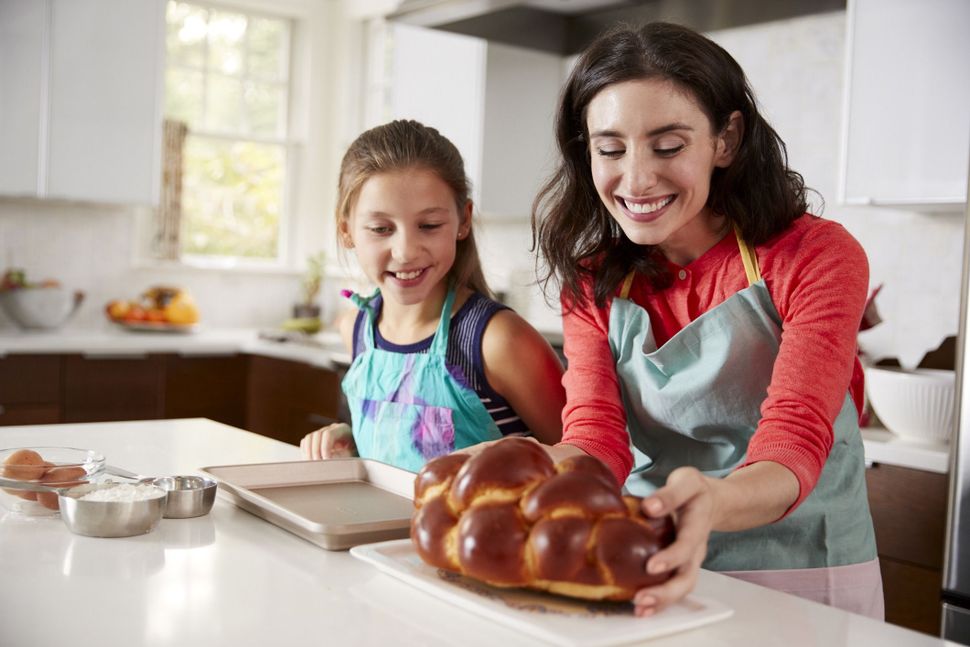 A mother and daughter making challah. Photo by iStockPhotos

(JTA) — In Sheldon Oberman’s children’s book “The Always Prayer Shawl,” a grandfather passes on his tallit to his grandson along with the sage advice, “Some things change and some things don’t.” At public readings, Oberman wore his grandfather’s tallit, which had inspired the story. When a non-Jewish author told him that she wished she could tell stories the way he did, he placed the tallit on her shoulders and told her, “You can! You can do it.”

This story illustrates how religion functions in complex ways in the lives of North American Jews. Was Oberman’s tallit a religious object? Was he using it in religious ways?

The new study of American Jews by the Pew Research Center, too, reflects the complicated and often contradictory ways that Jews employ the concept of “religion” as well as the way “some things change and some things don’t” in both American Jews’ practices and sociological studies of them. Like the 2013 Pew study of American Jews, “Jewish Americans in 2020” divides Jews into “Jews by religion” and “Jews of no religion.” Jews by religion say their current religion is Jewish. According to Pew, 27% Jewish adults do not identify their religion as Jewish but consider themselves Jewish ethnically, culturally or by family background. Among Jews 18-29, that number rises to 40%, twice that of Jews ages 50-64.

Some may wring their hands over what they see as dwindling participation in Judaism as a religion, as commentators did after the last survey. But what I see in this survey is evidence of the innovative and ever-changing ways Jewish religion is practiced, not grounds for panic.

Although the authors inform us “religion is not central to the lives of most U.S. Jews,” the concept of religion, as most Americans use it today, is a modern, Protestant creation, and Jewish practices fit uncomfortably in the category. Despite the best efforts of Jewish thinkers to separate religious and cultural aspects of Jewish practice, the boundaries have never been clear. Traditional understandings of “religion” have rested uneasily with Jewish realities, which have a greater focus on communities and practices. Only 20% of survey respondents said that their “religious faith” provides a great deal of meaning and fulfillment, perhaps because American Jews rarely use the language of faith.

Read more about what the 2020 Pew study reveals about American Jews.

But the study does reveal the many ways that American Jews of all kinds create Jewish meaning in their lives. These include practices traditionally understood as religious, such as attending a seder (62%), and those understood as cultural, such as cooking or eating traditional Jewish foods (72%).

In my book, “Beyond the Synagogue: Jewish Nostalgia as Religious Practice,” I argue that making sense of Jews’ practices requires us to employ a broader definition of religion. Following religious studies scholar Robert Orsi, I think religion is best understood as meaningful relationships and the practices, narratives and emotions that create and support these relationships. Understanding religion as relationships makes our interactions with families, our attachments to our ancestors, our connections to communities and the narratives we use to explain our place in the world central to religious activity. It lets us see Jewish religion flourishing in a wide variety of practices and in unexpected sites — in ways that its practitioners might not themselves identify as “religious” because of the way religion is so often narrowly construed.

I applaud the authors of this study for asking far more questions about Jews’ everyday practices than the 2013 study did, as well as for noting that cultural activities complement so-called religious ones. This study finds that, in large numbers, Jews eat foods they recognize as Jewish, visit Jewish historic sites when traveling, read books and articles about Jewish topics, listen to Jewish music, and watch TV and film with Jewish themes. What all of these activities have in common is that they allow Jews to place themselves within narratives that provide existential meaning. I wish that the study had asked about visits to Jewish museums, which are increasingly important spaces of Jewish community, or genealogical research, a wildly popular pastime that helps Jews place themselves within family and communal histories that cross time and space.

I suggest we pay more attention to what Jews do than to what they name as “essential” to their identity, as the study continues to ask, echoing the 2013 study. Only 20% of American Jews consider eating traditional Jewish foods to be essential to what being Jewish means to them. But the wording of the question does not reflect Jews’ realities. Eating foods recognized as “Jewish” may be a meaningful part of a Jew’s life, but it may be too quotidian, too easily overlooked, to be recognized as essential or important according to traditional metrics of religion. Commonplace activities such as eating foods that remind us of our families, our communities, and our histories are often quietly fundamental to religious identities rather than explicitly identified as essential to them.

Likewise, the study finds that large numbers of Jews own Jewish ritual objects. The fact that 24% of “Jews of no religion” own a Hebrew-language prayer book should give us pause. As religious studies scholar Vanessa L. Ochs finds, American Jews unobtrusively enact important parts of their identities through the material objects they have in their homes, including items they rarely if ever use. Oberman’s unconventional use of his tallit reminds us that Jews can find new and sometimes surprising meanings in ritual objects, even outside of traditional contexts.

Some things change, and some things don’t. American Jews continue to find meaning in emotional connections to their families, communities, and histories, though the ways they do so continue to change. Expanding our definition of “religion” can help us better recognize the ways in which they are doing so.

The views and opinions expressed in this article are those of the author and do not necessarily reflect the views of JTA or its parent company, 70 Faces Media.