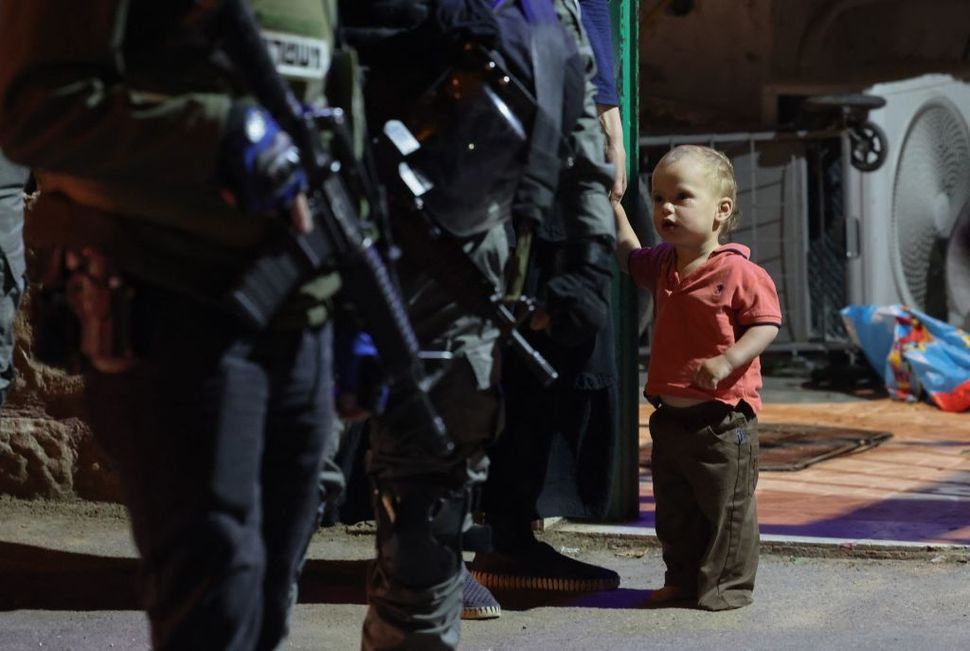 An Israeli settler’s child stands next to riot police during a demonstration as Palestinian families face eviction in the Sheikh Jarrah neighborhood of east Jerusalem, on May 5, 2021. Photo by Emmanuel Dunand/AFP via Getty Images 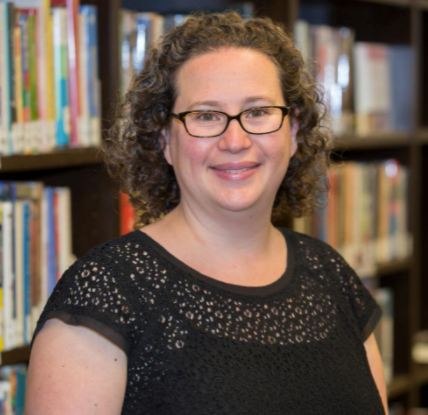 It is with heartbreak and concern that so many American Jewish adults are gazing towards the Middle East. But what do American Jewish children know about the current violence in Israel and Gaza? And how ought the adults who love them—parents, grandparents, and teachers—talk with them about it?

As a social scientist who studies Jewish children in the U.S., I’ve spoken with dozens of Jewish children about these questions. During every moment of heightened tension in the Israeli-Palestinian conflict since 2012, I have asked children to tell me what they know, how they feel, and how they learned about current events. It turns out that even though each child is unique, there are also developmental patterns in how Jewish children whose own homes and bodies are far away from the violence in the Middle East come to think about it. And that makes it much easier to know how to talk with them in developmentally appropriate ways at different ages.

Even in preschool, Jewish children know that Israel is a country that is far away from the United States. Kids who are 3- and 4-year-olds understand that Israel is a real place like Mexico, not an imaginary place like Arendelle from Disney’s “Frozen.” Children at this age may certainly understand when a parent is anxious or worried about information in the news, but they don’t typically associate Israel with violent conflict and they don’t spend much time wondering or worrying about wars in the Middle East.

Kindergarteners and first graders, by contrast, clearly understand that Israel is part of an ongoing and often violent conflict. In fact, “war in Israel” is often one of the first things that 5- and 6-year-olds mention about Israel even in moments of relative calm.

Yet at this age children find it difficult to grasp chronology and historical time, so they often conflate current Israeli soldiers with the Maccabees from the Chanukah story or other Jewish “fighters” from various points in history. Children in early elementary school often worry a great deal about whether the violence in the Middle East could seep into their own lives, and they need both emotional reassurance and help understanding that the “bad guys” from the Passover and Chanukah stories are distinct from the current-day challenges facing Israelis and Palestinians.

By second or third grade, whenever children learn to read fluidly, a new world opens in children’s ability to access and understand information. Children this age may learn about the current violence by reading over the shoulder of a parent scrolling through social media, or they may conduct Internet searches on their own, but 7- and 8-year-olds are often able to recount specific and detailed accounts of violent current events that they found online. At this age, children begin to express profound frustration when the adults in their lives don’t speak with them about both Israeli and Palestinian positions; they desperately want to know broad brush strokes about how “each team” views the conflict, and why each acts the way it does.

As early as fourth grade, but more commonly in fifth or sixth, Jewish children begin to make sense of the fact that Arabs are not a single, monolithic “team.” By age 9, 10, or 11, they can readily understand not only that tensions between Israel and Iran are different from those between Israelis and Palestinians, but also that Palestinians in Gaza have distinct experiences and positions from Palestinians in the West Bank or in Jerusalem. At this age, many children begin to develop cognitive empathy – the ability to imagine themselves in the shoes of another – and have profound moral questions about why the conflict is so intractable. Clear and simple answers about different “teams,” which second and third graders often crave, will no longer suffice as early adolescents seek to make sense of the fact that not only the communities of the Middle East, but also the United States, has a stake in the ongoing conflict.

By the time Jewish adolescents reach middle school, they often realize that Jews aren’t any more monolithic than Arabs are in their beliefs about, and positions to, the conflict. Despite the widely prevalent language of American Jews who “support Israel,” seventh and eighth graders understand that American Jews and their Israeli counterparts have differing – and at times radically opposing – beliefs about what it means to do so. Jews in both countries have developed a range of beliefs about, and strategies for, preempting, responding to, and/or resolving the violence. At this age, young teens explicitly say that they don’t want adults to tell them what to think, but they certainly need more help learning how to deliberate about these differing Jewish positions.

As children grow and as events in the Middle East unfold, children don’t expect adults to have all the answers. In fact, they don’t even expect that there are answers to all of the questions that they ask – especially when those questions raise complex moral or theological issues. They do, however, expect that adults are willing to talk with them about the things they wonder and worry about. Their own developmental stages ought to be a starting point for the conversations.