‘I’d been in that bus before’: Marking the 60th anniversary of the Freedom Rides 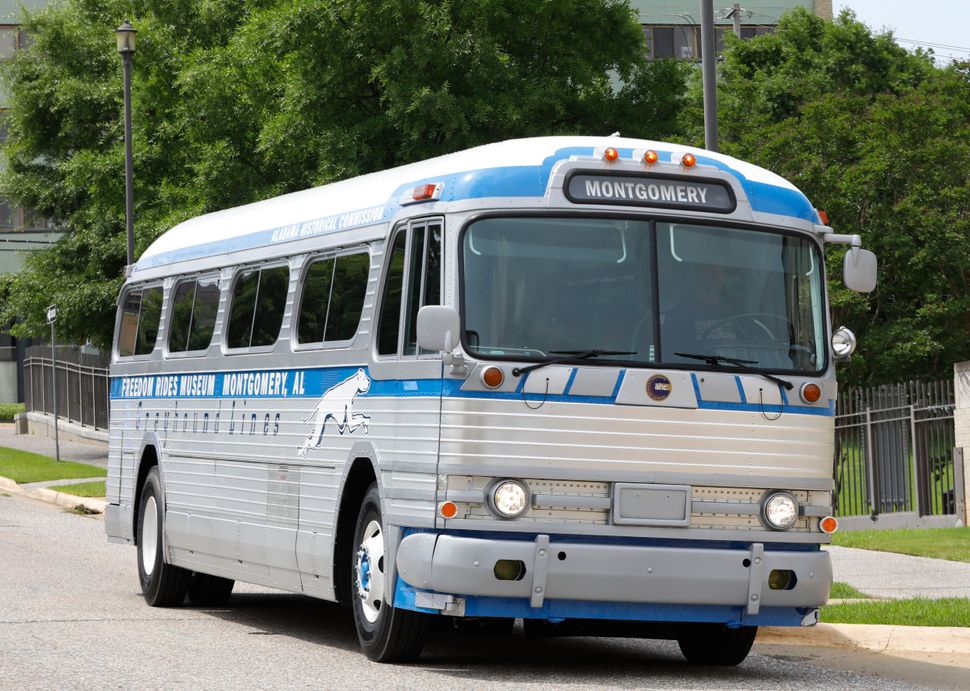 Sixty years ago, on May 14, 1961, one of two buses carrying an interracial group of Freedom Riders was firebombed on the outskirts of Anniston, Ala. The riders barely escaped with their lives, only to be beaten by the mob outside.

Of lesser import but nonetheless seared into America’s collective memory was the fate of the bus. Its charred hulk became an indelible symbol of just how far the Southerners would go to preserve white supremacy, even 15 years after the Supreme Court found segregation in interstate transportation to be unconstitutional.

Last week, a restored sister of that Greyhound bus — the exact same make and year — rode back into history as a mobile exhibit of the Freedom Rides Museum in Montgomery, Ala.

I’m headed there for a commemoration at the former Greyhound station that now houses the museum. I’ve actually been in that bus before. Not as a Freedom Rider — I was only 4 years old in 1961, though already a participant in civil-rights protests and marches planned in my family’s Chicago living room.

Growing up to become a journalist, I reached back to those roots to produce a PBS documentary on the lesser-known first Freedom Ride, at the dawn of the movement in 1947, an action then called the Journey of Reconciliation. When my production began in 1992, 10 of its 16 participants (including one who was Jewish, Igal Roodenko) were still alive. Three died in the months before I could begin filming a reunion trip.

That work led me to stop in at the Freedom Rides Museum three years ago. The executive director, Dorothy Walker, knew of my film and excitedly told me about a bus the museum had just acquired.

“Wait,” I responded. “Does it have a plywood floor?”

Well, not quite mine, but again, I had been in it before. In 2013, after pointing out the glaring omission of any mention of the Freedom Rides at the Greyhound Bus Museum in Hibbing, Minn. — the company’s birthplace — I was invited to curate an exhibit about the events along with Gene Nicolleli, the museum’s founder and director. With dozens of vintage buses on the grounds, many nonworking, I asked if he could locate the same model as the one that was burned in Alabama. We envisioned setting it on fire to create a burnt-out centerpiece for the exhibit.

In short order, his volunteers found one, and when it arrived we discovered the seats had been removed. That changed our minds: Instead of displaying it as a burnt hulk, why not put the exhibit inside the bus?

Nicolelli was brimming with excitement as we began drawing up plans and planning a kick-off event. Our local congressman said he would bring Rep. John Lewis, who was one of the first to be assaulted in the 1961 Freedom Rides.

But it was not to be. Nicolleli had a stroke, and died soon after, as did his volunteer assistant director. The museum faced closure — just as another was opening in Alabama.

A few years into her job, Walker, too, got the idea of exhibiting a bus, and began calling around for one.

“I didn’t even know there was a Greyhound Bus Museum,” she recalled. When told about it, she reached Ron Dicklich, a former Minnesota state senator who was now the Hibbing museum’s volunteer director.

“She actually had called me to see if I knew where there were any of that model bus,” he said. To her surprise, he had the exact model, and quickly agreed to donate it. But, he suggested, they might want to have work done on it before shipping it to Alabama.

Instead, they took delivery, Dicklich says. “Then they found out they had to do the refurbishment work — guess where?”

That was in Faribault, Minn., and the bus was shipped back to the state. The refurbishment, with period seats reinstalled, as well as more 21st century air conditioning and video monitors, was completed only this spring, making it back to Montgomery just in time for the 60th anniversary commemorations this month.

There was one Jewish member of the original 1947 Journey of Reconciliation. In the 1961 rides, no Jews were on the bus that was firebombed, but others were part of the summer of activism that followed the Alabama attacks. Often, as noted by Charles McDew, who was Jewish and preceded Lewis as the chairman of the Student Nonviolent Coordinating Committee, the public conflated “Freedom Rider” with all civil rights workers.

“We were called Freedom Riders even though we had nothing to do with having ridden on the buses,” McDew, who led voter-registration efforts in Mississippi, wrote in his autobiography, “Tell The Story,” released posthumously last year. “In 1960 I was an anonymous man walking down the street in these little Southern towns. In 1961 I was a Freedom Rider.”

Which is a reminder that repairing the world and working for equality, dignity and justice aren’t limited to any single act, however courageous it may be, and that there are campaigns everyone can, and should, participate in. And that the stories being told by “my bus” belong to us all.

Listen to Robin Washington’s telling of the story of the Freedom Rides Museums bus on his Wisconsin Public Radio show, “Simply Superior”.

‘I’d been in that bus before’: Marking the 60th anniversary of the Freedom Rides