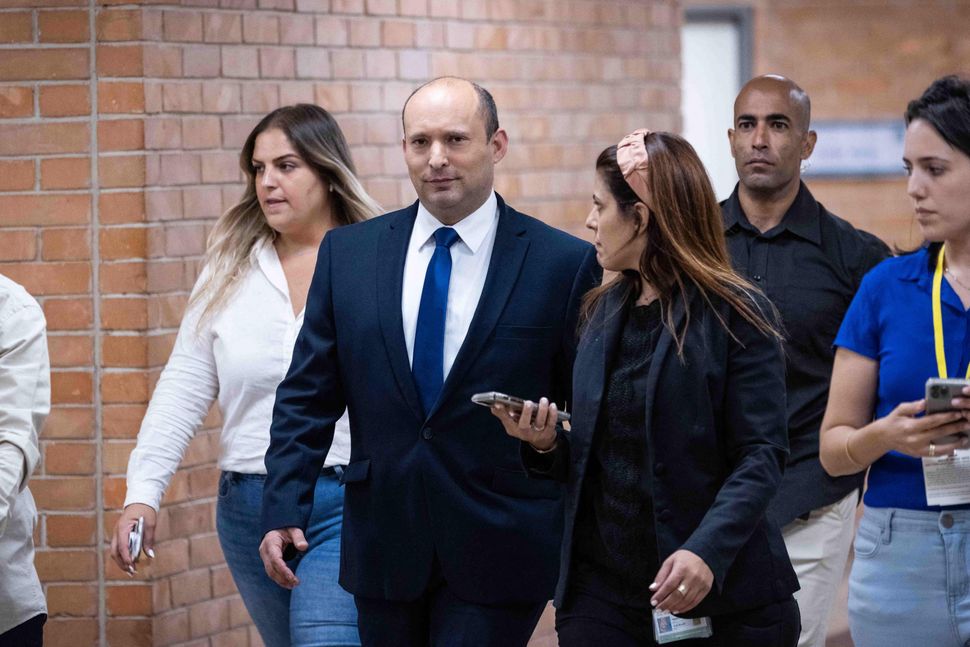 Naftali Bennett arrives at the Knesset to deliver a political statement in Jerusalem, on May 30, 2021 By Yonatan Sindel/Pool/AFP via Getty Images

Barring any unusual surprises, of which we have already had a great many, Israel will soon have a new government that few could have imagined a few weeks ago.

The proposed coalition between Yair Lapid, a centrist, and Naftali Bennett, a man of the hard right, who will share the premiership through a rotation agreement, is one that will include parties on the right, center, and left. It will have the tacit support of at least one political party that represents Israel’s Arab minority, some of whom identify as Palestinian citizens of Israel.

On the right, Bennett and his longtime partner Ayelet Shaked will be joined by Gideon Sa’ar, a former interior and education minister who was once a popular figure in Netanyahu’s Likud party, and Avigdor Liberman, an ultranationalist firebrand who was once loathed on the center-left. In the center, Lapid and Defense Minister Benny Gantz; and on the left, both the Labor Party and the more dovish Meretz will receive important cabinet seats.

Apart from the ideological salad, what is most peculiar about this proposed agreement is that it is Bennett, and not Lapid, who will get the first chance to serve as prime minister. Yesh Atid, Lapid’s moderate liberal party, won 17 seats in the Knesset. Bennett’s Yamina won seven, and one of his party’s members will be voting against the new government.

Additionally, there are several other parties in the coalition with equal or greater representation in parliament, and thus an equal or greater claim on the premiership than Bennett. Why have they agreed to what would ordinarily be a bizarre concession to a small right-wing party?

Bennett’s enormous leverage as an uncommitted party between the Netanyahu and anti-Netanyahu blocs explains a good chunk of this. Mathematically, neither bloc could build a coalition without him. For Netanyahu’s opponents, if politics becomes about getting rid of one man, the person who replaces him may be a question of secondary importance.

Even with Bennett’s bargaining power in mind, it is still remarkable that enormous egos have set aside their ambitions to craft a government that does not make a whole lot of sense. More than anything else, that speaks to the total lack of trust these party leaders had in Netanyahu. On Sunday morning, he offered Sa’ar a chance to serve as prime minister first in a rotation with him. Had Sa’ar accepted, it would have probably pushed Bennett back into the arms of the Netanyahu bloc.

But Sa’ar did not accept, and there was never a chance he would. After Netanyahu sent the country to a fourth election in two years because he was unwilling to keep to his last rotation agreement with Gantz, everyone knew how much his word was worth. Sa’ar is not a neophyte, and Gantz no longer is. Liberman has had enough of Netanyahu after a decade of on-and-off partnership. There was no one left for Netanyahu to lie to, no one to fool with his “tricks.”

It should be said that this government was not Bennett’s first choice. While he has his own rivalry with Netanyahu, there is no reason to believe he was aiming to topple the premier from the start. Bennett is an honest right-winger who was presented with a stark choice: a fifth election or lead an unwieldy government. Calling the possibility of a fifth election Netanyahu’s “private Masada,” Bennett emphatically chose the latter.

Earlier this month, I published a column in the Forward warning of the potential dangers of the center-left parties supporting Bennett. I stand by all my concerns, but now that theory has started to give way to reality, I won’t deny that I feel more than a little more optimistic about the state of Israeli politics.

After an 11-day war that triggered unprecedented violence between Israeli Jews and their Arab neighbors, particularly in so-called “mixed cities,” it should not count for nothing that the new government will have some Arab political support.

Or that it will contain a genuine leftist party for the first time in more than 20 years. Or that the Israeli police will no longer be overseen by someone who encouraged brutality. Or that Netanyahu’s attacks on Israel’s independent judiciary will no longer carry the imprimatur of the prime minister.

Will Netanyahu now decline Dylan Thomas’s advice and go gentle into that good night? Of course not. His trial for bribery, fraud, and breach of trust will go on while he is leader of the opposition. We can also trust that he will also do all he can in the coming days to torpedo this new government and avoid that fate. But for the first time in a long while, the good money is on Netanyahu being evicted from the prime minister’s residence on Balfour Street.