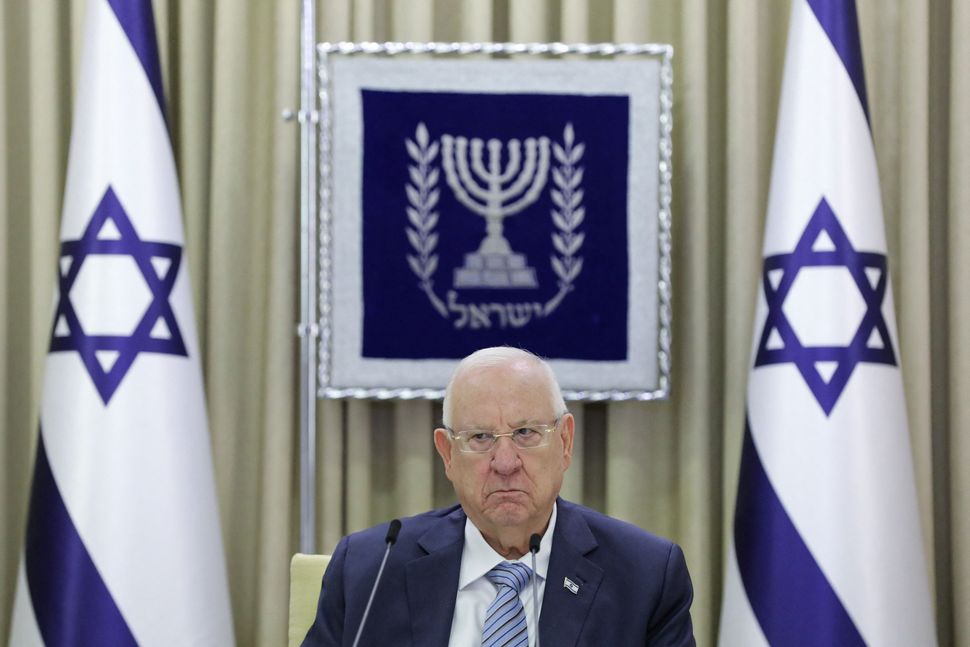 Over the weekend, as it became clear that Naftali Bennett would move to establish a unity government, ending Benjamin Netanyahu’s 12 year reign, a disturbing image popped up in a WhatsApp group of Likud activists: a black-and-white photo of Bennett in a keffiyeh— a traditionally Arab headscarf— with the words “The Liar” and “Elections Now” written in blood-red on top and bottom, respectively.

This image was awfully familiar. In the 1990s, the same image had Yitzhak Rabin’s face at the center and were emblematic of the type of fierce, populist and illiberal rhetoric embraced by the Israeli right and Benjamin Netanyahu.

It wasn’t always like this. No one in Likud’s current Knesset roster was active in politics when the Likud, while maximalist and right-wing on the future of the West Bank and Jerusalem, was a force for equality, liberalism, political inclusion and an independent judiciary. (Then it was the dominant Labor Zionists who often violated the rights of minorities.)

Reuven Rivlin, whose tenure as President of Israel is rapidly approaching its end, is an exemplar of that era, a political environment that would be virtually unrecognizable today.

A stark case in point: Israel’s Arab citizens lived under military rule from 1950 until 1966, governed with a system of emergency regulations imposed by governments headed by the center-left precursor of the Labor Party. It was the right’s Menachem Begin who strongly opposed this unseemly arrangement, unequivocally stating in a Knesset debate in 1962: “We believe that in the Jewish State, there must be and will be equal rights for all its citizens, irrespective of religion, nation and origin.”

None of this hampered the right’s views on other issues, doubly so when it came to matters of sovereignty and identity. Begin nearly crossed the line into sedition in his aggressive objections to Israel negotiating reparations with the postwar German government. The same was true for his devotion to permanent Israeli control of the West Bank. However, that vociferousness existed alongside a deep reverence for the state’s institutions, including the Knesset but also the courts, which Begin believed should serve as a check on majoritarian rule. This dual liberal-national tradition was inherited from the father of the Israeli right, Ze’ev Jabotinsky.

But today there remains only one leading Likudnik of the Begin-Jabotinsky tradition: Rivlin, whose successor, Isaac Herzog, was elected by the Knesset today. When he officially departs on July 9, he will be greatly missed by many, but especially by liberal Israelis.

Because despite his party’s turn to the right, Rivlin has seldom wavered from his liberal outlook. He has stubbornly sought to build bridges with Israelis who fall outside the right-wing’s notion of the national consensus, including Arabs and leftists. As president, a relatively apolitical position, he spoke out against the 2018 Nation State Law. Echoing Begin’s words, he told members of the Knesset: “Are we, in the name of the Zionist vision, willing to lend a hand to the discrimination and exclusion of a man or a woman based their background?”

Even where Rivlin has taken decidedly hawkish positions, such as his opposition to the creation of a Palestinian state, he has long insisted on the full rights of Arabs in the Jewish state. Thus the one-state solution he supports would grant full citizenship to all Palestinians living in the West Bank, meaning full and equal political rights.

Similarly, Rivlin has maintained the old Likud’s support for independent judicial review, which has been in the crosshairs of rightist parliamentarians eager to whip up populist anger at legal elites. In the face of Netanyahu’s increasingly bitter broadsides against the judiciary against the backdrop of his corruption trial, Rivlin has reliably come to the defense of the legal system.

As with Begin, it must be said that Rivlin’s broad-mindedness and tolerance for others did not mean compromising on his right-wing ideological priors. Nor was it always unerring. Before being elected president, Rivlin was known to disparage Reform Jews, a stance he has since walked back to the satisfaction of the movement’s main American and Israeli organizations. But pluralism has always been his lodestar and the same simply cannot be said for his Likud contemporaries.

Rivlin never changed with the circumstances of his party. He preferred the right edge of the Zionist tent, but he always wanted that tent to be as big and welcoming as possible.

And soon he will be gone, with no comparable figure on the Israeli right to take his place as a liberal conscience.