The Surfside disaster was a terrible wakeup call. Will we listen? 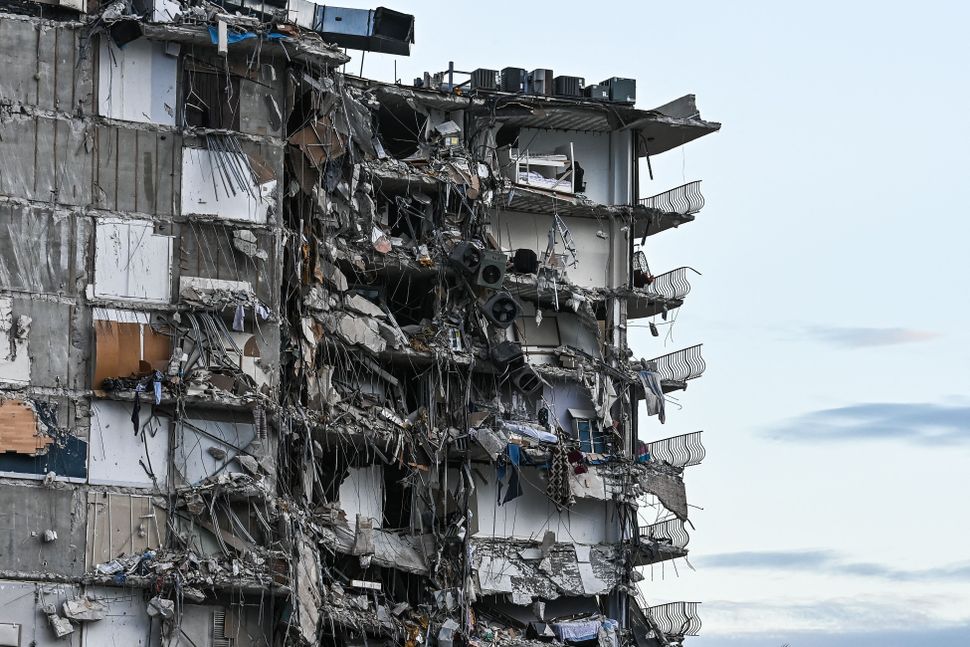 Rubble hangs from a partially collapsed building in Surfside north of Miami Beach, on June 24, 2021. By Chandan Khanna / AFP via Getty Images

An unfathomable tragedy is unfolding right now in Surfside, where eleven people are confirmed dead and 150 still missing.

The collapse of an apartment building — without warning, and for reasons that remain unclear — defies expectation. Tragedies like these are moments of shattering. We are praying for the families of those who have perished and that survivors may yet be discovered beneath the rubble.

For Jews, the collapse of the Champlain Towers strikes particularly close to home. Over a third of North Beach, where the building is located, is Jewish — part of a vibrant and diverse community. Florida is home for many of us, a place of family for others, and a cultural locus for the Jewish community across the country and world.

Like many, we are horrified by the unfolding scenes of devastation in Surfside. We know that in the short term, immediate assistance is needed for the victims and their families: this is a tragedy that will reverberate for a long time through the Jewish and the broader Surfside community. To that end, the Greater Miami Jewish Federation has set up an emergency assistance fund that will support those in the community who have been impacted by this tragedy, alongside other local charities. Let us support those who are suffering right now and grieve together, as a community, in this heartbreaking time.

But let us also recognize the urgent need to invest in the resilient infrastructure our communities need to build a future that is safe, equitable, and livable for generations to come.

What exactly caused this tragedy remains uncertain. But we do know that climate change is shifting the ground underneath South Florida in dramatic and destructive ways.

The Champlain Towers were constructed in an area that is on the frontlines of sea level rise, extreme storms, and other long-term impacts of climate change. The beaches of South Florida have in recent years experienced dramatic flooding, subsidence, infrastructure failures and more frequent extreme storms. A recent piece from Yale Environment 360 noted that if current trends continue, South Florida’s seas could rise by half a foot by the end of this decade. By the end of this century, sea levels in South Florida could rise by 3-9 feet, which would displace hundreds of thousands of people in the Miami-Dade area.

We are facing a summer of cascading climate disasters, and yet politicians are acting as if there is no urgency. Right now, the Pacific Northwest is experiencing record-breaking heat that the National Weather Service argues will amplify the risk of wildfires. California, Utah, Arizona and Nevada are facing their worst drought in at least two decades. Hurricane season has already begun and NOAA is predicting at least 3-5 major storms developing in the Atlantic basin. That such disasters are occurring with increasing regularity underscores that we cannot afford to ignore the devastating effects climate change is already having on our communities. There is simply too much at stake.

We can choose to dig in our heels like Florida Governor Ron DeSantis, who cynically signed a bill that bans local governments in Florida from regulating fossil fuels — a decision that flies in the face of science, common sense, and basic decency. Or we can look soberly at what’s happening to the world around us, give voice to our fears, and join together as a community.

Right now, Congress is debating a wide-ranging infrastructure, recovery, and climate package – one that would create millions of jobs building a new, clean energy economy. While infrastructure is often relegated to the realm of policy wonks, the reality is that it is the foundation upon which our economy and everyday lives rest.

The legislative package being debated would invest billions of dollars rebuilding bridges, roads, transmission lines and buildings like Champlain Towers, which are in desperate need of repairs and upgrades. Congress has a historic opportunity to ensure that our country recovers from the economic devastation caused by COVID-19 and moves towards a more sustainable future.

Will Senators Rick Scott and Marco Rubio bury their heads in the sand like Governor DeSantis, or will they step up, recognize the need to address sea level rise and the ongoing climate crisis, and pass a recovery package at the scale that science and justice demand?

As Jews, it’s our responsibility to advocate for just and equitable policies. The tragedy in Surfside is a terrible reminder that the ground upon which our communities are built is far less firm that it may seem. Let us remember the victims of this tragedy and ensure others do not suffer a similar fate by joining together to build a strong foundation for our collective future.

Rabbi Jennie Rosenn is the Founder and CEO of Dayenu: A Jewish Call to Climate Action, a national organization mobilizing the American Jewish community to confront the climate crisis with spiritual audacity and bold political action.

Scott Lewis, Ph.D. is a science educator and natural resource specialist in Pembroke Pines, Florida. A Dayenu leader, he helps organize the Higher Ground Initiative, a coalition of Jewish congregations around the world focused on the issue of Sea Level Rise.

The Surfside disaster was a terrible wakeup call. Will we listen?