How a forgotten Brooklyn Congressman helped start the US-Israel relationship 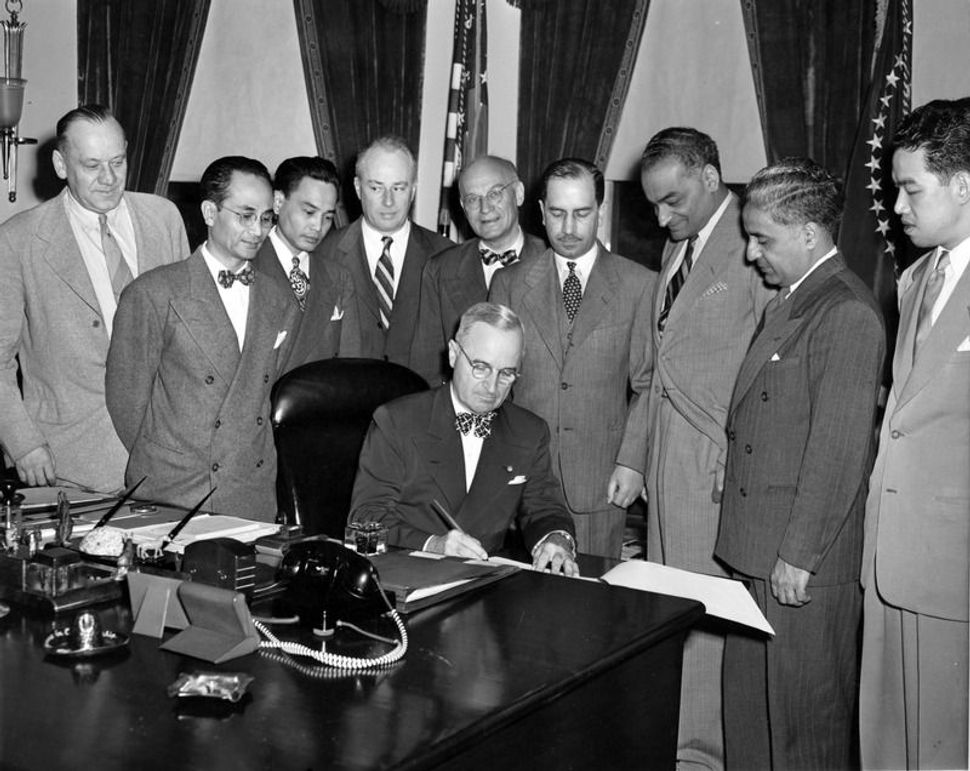 A letter signed by 73 House Democrats on June 23 urged President Joe Biden to abandon his predecessor’s tilt toward Israel and to return to a “longstanding, bipartisan United States policy” on Israeli-Palestinian relations.

While it may seem like a drastic change in American foreign policy following four years of President Trump, it actually invokes a diplomatic status quo dating back to the birth of the modern Jewish state.

America’s position toward Israel was not always friendly, at least in the beginning. And if not for the intervention of a now all-but-forgotten member of Congress from Brooklyn, the nascent nation may have faced an immediate demise.

U.S. Rep. Emanuel Celler, a Democrat first elected to the U.S. House in 1922, had long been distressed over the fate of immigrants fleeing oppression, particularly European Jews denied entry to the U.S. before and during World War II. Following the war, he lobbied relentlessly on behalf of displaced persons and for a haven to absorb European Jews.

As Israel prepared to declare its independence in May 1948, Celler pressed an annoyed President Harry Truman to recognize the new state, despite a warning from White House military advisers that doing so would antagonize Arab nations that export petroleum, fuel for American cars and homes.

The record shows that Celler lobbied Truman persistently, one example being a 1946 letter to the president complaining about a lack of U.S. representation at a London conference about the future of Palestine. In 1948, Celler visited the new state of Israel. In 1951, he returned, sponsored by the Magan David Adom Mission, filing six dispatches to the daily Brooklyn Eagle about his trip.

Celler prevailed, ultimately wearing down Truman enough to listen to him and not the generals. The 33rd president followed his moral compass and decided that Jewish refugees deserved a homeland.

Yet that recognition did not prevent Israel from being immediately attacked by its Arab neighbors, including Egypt, Jordan, Syria, Lebanon, Iraq and Saudi Arabia. Nor did it mean U.S. military assistance. Israel was on its own, with only a 50-50 chance of survival, as Yitzak Rabin and other generals concluded.

The Israelis won and secured their oasis in the desert. Israel evolved into a strategic U.S.-supported power in the Middle East, though the relationship between the two countries is now changing. Israel absolutely has the right to defend itself from forces that want to annihilate it. Yet has the country grown so powerful that it is now an oppressor of Palestinians? Indeed, the story is complicated.

Two years before Israel’s birth, a U.S. State Department adviser dismissed Celler as a “run-of-the-mill Zionist” when the Congressman led a delegation that met with President Truman regarding a future homeland for Jews.

Yet Celler’s efforts did not automatically stem from being Jewish himself. Many American Jewish leaders in the 1930s and 1940s were resistant to the idea of bringing European Jews to America, viewing the political climate here too hostile. Celler, said one historian, Rabbi Lance Sussman of Philadelphia, was the lone, unrelenting voice advocating for refugees.

Celler’s paternal grandfather Ernest Mueller was a German Catholic immigrant who converted to marry a Jewish teenager. Celler’s mother Josephine married a Jew, Henry H. Celler. Emanuel Celler and his wife, Stella [Baar] were members of Congregation Beth Elohim, a liberal synagogue in Brooklyn. He was 26 years old when World War I began in 1914. Celler muted himself about his German heritage, based on readings of his 1953 autobiography and 1970 American Jewish Committee oral history.

Historian David Nasaw referenced Celler a dozen times in his 2020 book, “The Last Million: Europe’s Displaced Persons from World War to Cold War,” citing Celler’s Displaced Persons Act 1948 as responsible for bringing thousands of refugees to America, which at that time was not a welcoming country.

Some historians who have taken a deeper look at Celler’s legacy estimate that the Congressman’s actions ensured safe passage to Israel for 339,000 to 600,000 refugees, many of them European Jews.

Western support for Israel intensified not long after with the Suez Crisis of 1956. The wars of 1967 and 1973 (months after Celler left office) and the subsequent Intifadas and other flare ups further redefined political realities, leading to the “longstanding, bipartisan United States policy” cited in the letter to Biden last week.

If and how Celler, who died in 1981, would have evolved with his party members will never be known. Nor can it ever be determined what his attitude would have been as a champion of displaced persons regarding generations of displaced Palestinians.

Celler’s greatest legacy is the Immigration and Naturalization Act of 1965, which led to millions of newcomers from throughout the world who literally changed the complexion of America. It was a stark reversal from the decadeslong racially restrictive policy that welcomed Northern Europeans only.

But he also changed the world in securing a nod, if little more than that, from the U.S. toward Israel, at perhaps the most crucial moment in its existence.

Wayne Dawkins, professor of professional practice at Morgan State University of Baltimore, is the author of “Emanuel Celler: Immigration and Civil Rights Champion.”

How a forgotten Brooklyn Congressman helped start the US-Israel relationship