Some feel trapped in ultra-Orthodoxy. Why don’t we help when they try to leave? 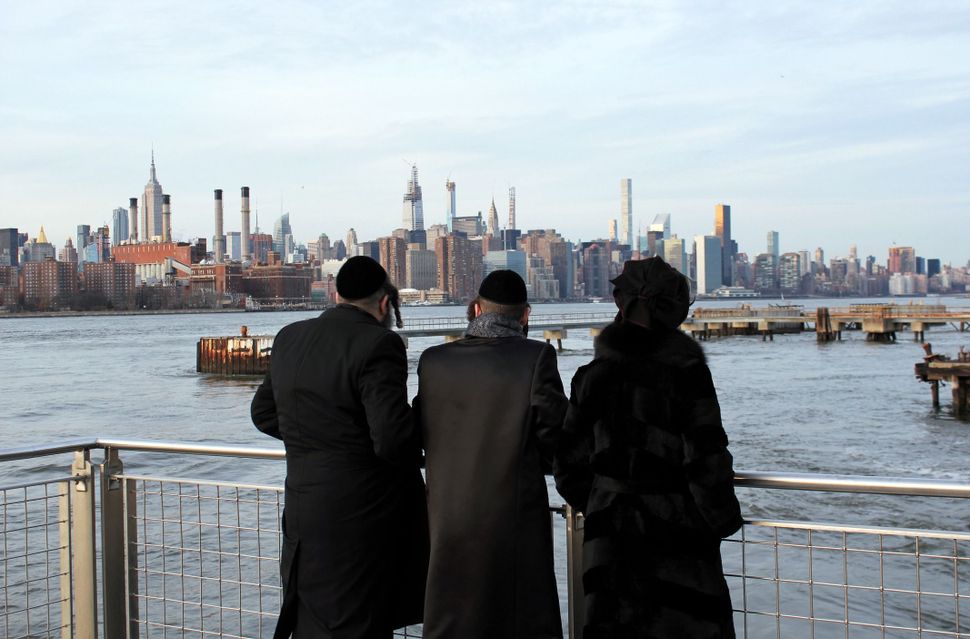 Love or hate Julia Haart, the star of the Netflix reality show “My Unorthodox Life,” you have to admit that she has focused our attention on a very serious issue: you can’t leave the ultra-Orthodox world easily.

Haart, relying on her secular education and business savvy, managed to propel her family into a Manhattan penthouse within a few years of leaving Monsey. But other Jewish emigres from ultra-Orthodox communities have it a lot harder.

I first became familiar with their suffering when I began filming “An Unorthodox Education,” a documentary-in-progress about the terrible state of secular education at many ultra-Orthodox yeshivas.

One of the people I focus on is Joseph Kraus, who left his hasidic Orthodox home in Kiryas Joel, New York, in November 2020 because he wanted to get an education. He was 17 but could barely speak English and certainly couldn’t read or write it.

To educate himself enough to prepare for his move, Joseph managed to buy a smartphone. Hiding in the woods behind his home, he spent hours each day Googling and watching YouTube videos to learn about the outside world. He started blindly calling social service organizations, using his limited English, trying to find somebody who could help him.

The only person who responded was the supervisor of a suicide hotline, who spent hours on the phone with him answering his questions.

When Joseph decided he was ready to leave, the supervisor advised him to go to Old Navy, buy some clothes, cut off his beard and side locks at a barber and check into a youth shelter in nearby Middletown, New York. At Old Navy, he purchased a pair of women’s pants by mistake, because he didn’t know there was a difference.

He spent the next few months in a series of shelters during the height of the pandemic, learning English by watching television. When he tried to attend public high school in upstate New York, he found he couldn’t understand what the teachers said. He told me that he didn’t even know the alphabet.

When he heard that jobs were available in Texas, he went from airline to airline at JFK, asking for the cheapest fare. This looked so suspicious that he was picked up by the police and taken to a psychiatric hospital for evaluation. Somehow, he found his way to Houston, where he hid all his belongings in some bushes and started looking for a job. He came back to find everything stolen.

I caught up with Joseph when he was in a foster care home in Galveston, just before his 18th birthday. He had created a series of YouTube videos about his experiences, which had attracted thousands of followers, many of them Hasidic Jews who mocked him or urged him to return home.

When I interviewed Joseph on two occasions, I found him remarkably articulate and insightful about his situation. And yet, his life at this point — the life of a refugee without a safety net — was total chaos.

At one point, somebody gave him a room in an upstate New York hotel under construction. When that ended after just a few weeks, he found himself in a Wal-Mart parking lot at 4 a.m. near his hometown of Kiryas Joel. I met up with him and drove him to the social service office in Greene County, where he was placed in another shelter. I’ve since lost touch with him.

The road ahead is steep. Illiterate in English, Joseph is not even qualified to get a job at McDonald’s. It will likely take him months or years to learn what he needs to get his GED.

Documentary filmmakers are supposed to be objective observers of their subjects, but I found myself trying to help him out. I contacted synagogues, asking for volunteers who might want to serve as this young man’s advocate as he works his way through the social service system — without much luck.

In the past, when Jews fled their homes to seek freedom, the American Jewish community stepped up to provide generous support.

But today, those who most need our help integrating into American society are being almost entirely neglected by their fellow Jews.

The latest influx of desperate Jews comes not from Russia or Eastern Europe, but from Williamsburg and Borough Park and Kiryas Joel. While many individuals are happy to spend their entire lives in the hasidic community, for those who choose to leave and to seek the secular lifestyle and education that has been denied them, almost no support is available.

Naively, I contacted HIAS, formerly the Hebrew Immigrant Aid Society. I told them that I felt Joseph was a refugee in his own country and needed their help. The press liaison who responded said he and his associates were touched by his case but explained that their work was “specifically focused on refugees and asylum seekers, and we don’t offer appropriate service for the person you’re working with.”

They (and almost everybody else) advised me to contact Footsteps, which provides social and emotional support as well as educational and career guidance to those who have chosen to leave their ultra-Orthodox communities. I was quite familiar with the organization because a few years back, my wife and I hosted one of their participants in a spare bedroom for a year while she pursued her bachelor’s degree.

While Footsteps offers its members an extraordinary set of services, it doesn’t have the resources to give Joseph a permanent place to stay or the long-term financial support he needs to pursue his goals. And by law, Footsteps can’t help anybody under 18 who wants to leave.

This is a shonda of the highest order.

In an ideal world, Jewish charities would join forces to set up dorms where young people and families could stay while they pursued the secular education that was illegally denied to them — even religious schools are required by law to provide a substantially equivalent education to what a public school offers but often do not. These “refugees” would get stipends to support themselves until they became independent. They are often traumatized and psychologically fragile. As immigrants in their own country, they deserve the same support we gave their European grandparents and great-grandparents decades ago.

At this moment, thousands of ex-Hasids like Joseph are struggling to make ends meet. Many of them have told me that they know dozens of others who want to leave their community to pursue an education but don’t because they know they won’t receive the support they need.

As I sought help for Joseph, I asked myself: Why hasn’t the Jewish nonprofit world rushed to their aid? Why are Jewish charities spending millions helping non-Jewish refugees from across the globe when thousands of young Jewish refugees are struggling right here in Brooklyn?

The majority of people in the ultra-Orthodox community are satisfied with the education they receive. But some are not. A new generation of refugees is huddling on our doorstep. It’s time we helped them breathe free.

Joe Kolman is a journalist and filmmaker.

Some feel trapped in ultra-Orthodoxy. Why don’t we help when they try to leave?