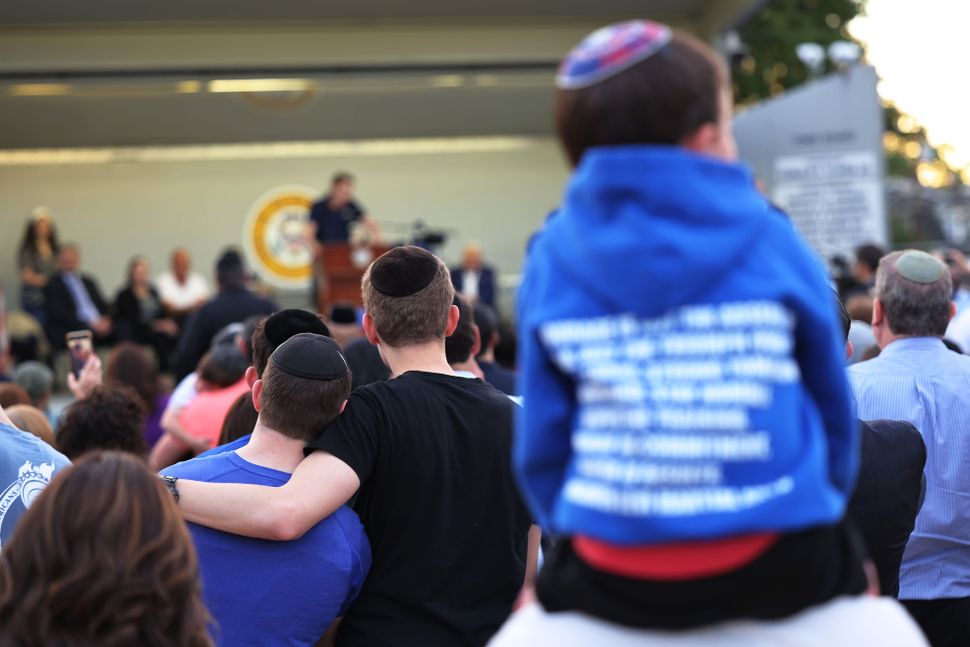 People listen to Joseph Borgen, a recent victim of a hate crime, speak during a rally denouncing anti-Semitic violence on May 27, 2021 in Cedarhurst, New York. By Michael M. Santiago/Getty Images

Sometime soon, President Biden will likely nominate a candidate for the Department of State’s Special Envoy to Monitor and Combat Antisemitism.

Regardless of who is selected, the envoy-designee will be asked at their confirmation hearing what they think of the International Holocaust Remembrance Alliance’s working definition of antisemitism, which has been adopted by many governments, and which Israel and many Jewish organizations are energetically promoting.

The U.S. State Department is already on record, calling the IHRA definition the “gold standard,” but this definition has been criticized by pro-Palestinian activists and some progressive pro-Israel Jewish groups, especially over concerns that it is being used to censor and suppress pro-Palestinian speech.

I was the lead drafter of the “working definition” of antisemitism, which eventually became the IHRA definition. It was created more than 16 years ago after the uptick in attacks on Jews, particularly in Western Europe, during the Second Intifada. Its main purpose was to provide European data collectors common guidelines of what to include or exclude in reports about antisemitism.

The definition notes that antisemitism is, at heart, a conspiracy theory claiming Jews conspire to harm non-Jews, thus providing an “explanation” for what goes wrong in the world. When individual Jews are held responsible for events in Israel/Palestine, it’s like holding Jews collectively responsible for the death of Jesus or the disappearance of Christian children or the Black Plague: antisemitic.

The working definition provides clear language designed to help law enforcement and others avoid trying to psychoanalyze the perpetrator of every alleged antisemitic incident. This was particularly important for hate crimes, as the focus should not be on the actor’s motive (generating debates on if he really  hates Jews), but rather on his intent to select a victim of a criminal act specifically because they were Jewish (or connected to a Jew).

There were examples about Israel included in the working definition because there was a correlation (as opposed to causation) between increased anti-Israel expressions and upticks in attacks on Jews (something we recently witnessed again this May.)

Unfortunately, as I testified before Congress in 2017 and wrote in a recent book, the working definition has been primarily used (and I argue, grossly abused) to suppress and chill pro-Palestinian speech, starting on campus in 2010, and then more broadly.

In the last days of the Trump administration, Secretary of State Pompeo even floated the idea of designating groups like Human Rights Watch and Amnesty International antisemitic because of their statements about Israel (and thus threatening their funding).

The European Commission “Handbook for the practical use of the IHRA working definition of Antisemitism” describes using the definition for similar purposes, so that “funding does not go to entities and projects that promote antisemitism… and to refrain from making premises and infrastructure available to organisations and associations that express antisemitic views or question Israel’s right to exist.”

Further, the Handbook advocates using the definition for “engaging with social media companies,” “[e]valuation of educational material” and when drafting “Codes of Conduct at universities.”

The Handbook also notes that “only a few countries have implemented relevant programmes or initiatives…[b]ecause adoption, endorsement and application of the IHRA Working Definition of Antisemitism is a rather recent development.”

This is somewhat misleading — it’s true that the International Holocaust Remembrance Alliance adopted the definition in 2016, but the “Working Definition” itself has been around and promoted since 2005. And while it has been used over the years for such things as police training and diplomatic discussions, it has not, to date, had the transformative effect on data collection and hate crime analysis hoped for. (The Handbook underscores that “few EU Member States record antisemitic incidents in a way that allows them to collect adequate official data.”)

It’s also disingenuous for the European Commission Handbook (and IHRA’s promoters generally) to claim the definition isn’t “legally binding,” presumably meaning you can’t be thrown in jail in most countries for expressions perceived as violative.

When you are asking institutions and governments to adopt a definition — to enshrine it, to consult it, to use it in codes and procedures — that’s using the definition like a law. And indeed President Trump’s 2019 executive order required the Department of Education to consider the definition while evaluating claims of antisemitism. Jared Kushner was explicit that the adoption of the definition reflected government policy equating anti-Zionism with antisemitism, full stop.

While anti-Zionism can certainly be expressed as antisemitism, the question of whether anti-Zionism is antisemitism is one largely allergic to the bright lines definitions seek to create. One can oppose Zionism for political or theological reasons that have nothing to do with hatred toward Jews or belief in Jewish conspiracy.

The nominee should make clear that while the U.S. will call out antisemitic tropes and actions by leaders of other countries, it won’t support efforts anywhere to insist that NGOs and campus activists have the “correct” line about Zionism and Israel.

Would the nominee object if the education secretary of a country threatens the funding of universities that don’t adopt the IHRA definition, as happened in the UK?

Similarly, a leader of a major Jewish organization has advocated the use of the definition to stop pro-Palestinian campus organizing with which he disagrees, such as “Israel Apartheid Week.”

We should counter expressions we find disagreeable, not ask governments to suppress them. Will the nominee go on record saying that he or she disagrees with those who want to use the definition to suppress speech? Will they agree that campus-adopted definitions are invitations to group-think, thus undercutting the goal of a university education — to create critical thinkers? Will they underscore that academic freedom and liberal education are important cornerstones of democracies, here and abroad?

And would they agree that definitions can actually make combating antisemitism more difficult?

As I and many others have written — no one more eloquently than Joe Cohn of the Foundation for Individual Rights in Education — there already exists a tendency of the political right and the political left to censor and chill political opponents. A definition applied like IHRA, as one reviewer of my book pointed out in criticism of my role, has a clear effect: “[i]f you give witch hunters a manual for the discovery of witchcraft they will find witches.”

IHRA’s zealous supporters often say that to combat antisemitism, one has to define it. In my view, that simply isn’t true. Definitions are useful for data collectors, but it’s not as if people didn’t fight antisemitism before the definition was created over 16 years ago.

The next special envoy will need to tackle antisemitism in the real world, outside the myopic debate about whether any antisemitism definition should be treated like the holy grail. The Capitol Insurrection happened just a few months ago and democracies around the world are under stress. Jewish security is inextricably linked to the strength of our democracies, and how well they protect free speech.

Antisemitism involves attitudes, identity, crimes, politics, religion, the push for media ratings, rumors and so many other things. Antisemitism isn’t just informed by how people feel about Jews, but also about larger social forces that encourage conspiratorial thinking as personally comforting and politically expedient.

I hope the nominee will help guide us all out of this dangerous definitional rabbit hole, and help us stop fighting each other about definitions while ignoring the most important things.

Kenneth S. Stern is the director of the Bard Center for the Study of Hate and author of The Conflict over The Conflict: The Israel/Palestine Campus Debate