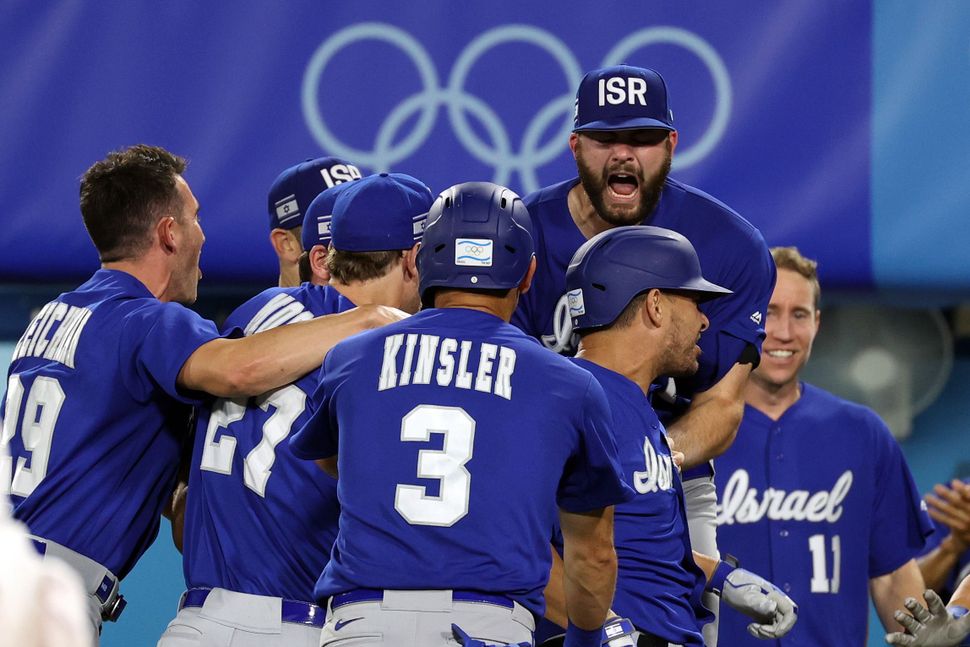 Daniel Valencia #19 of Team Israel returns to the dugout after hitting a two-run home run in the eighth inning against Team Dominican Republic during the knockout stage of men’s baseball on day eleven of the Tokyo 2020 Olympic Games at Yokohama Baseball Stadium on August 03, 2021 in Yokohama, Japan. By Koji Watanabe/Getty Images

In 2017, I was a high school junior who usually struggled to wake up on time for school. And yet, at 5:30 am one morning in early March, I sat wide-eyed on my family room couch, watching a baseball game.

It was the opening game of the 2017 World Baseball Classic, the foremost international baseball competition, and South Korea was playing Israel. After cruising through the qualifiers, this ragtag team of American MLB journeymen, minor leaguers, and even a couple of actual Israelis were playing my favorite sport on the global stage.

I was ecstatic. I had woken up early, taught myself how to make coffee, and even kept the game covertly up on my laptop with the sound off while my AP Physics teacher introduced something about inertia or rotational velocity. Sorry, Dr. Koehler; I had more important things on my plate that morning.

Israel won that first game against South Korea, the next one against Chinese Taipei, and even a third one against the Netherlands. And for each game (the latter two started at 11 PM EST, which was a bit more palatable), I plunked myself on the couch and refused to move until the game was decided.

Just like that, we had beaten countries that all had notable lists of MLB players both active and retired. Unfortunately, we finished the second round with just one win (and what a win it was — against powerhouse Cuba) and didn’t continue on in the tournament. I think that the US won the overall competition, but that part fell to irrelevance in my memory.

As a American Jew, I have no hesitation using that pronoun, we, to describe my relationship with the Israeli national baseball team. Many of my most cherished memories took place within the shared space between Judaism and baseball — everything from going to Jewish Heritage Night hosted by my hometown Pittsburgh Pirates, to playing baseball every day at a Jewish sports-centric sleepaway camp, to having my Bar Mitzvah party in the club level of the Pirates’ stadium.

But never had I felt the connection so viscerally as when I saw a baseball team entirely composed of Jews wearing “Israel” across their chests, and sporting Jewish stars surrounding a stylized letter “I” on their caps.

This brings me back to why I use “we” when rooting for this team representing a country in which I do not live. Most of the players on the Israeli baseball team — and its various iterations for different competitions and tournaments throughout the years — are like me: they were born in America. They are Jewish. They play baseball. And yet, they took up the cause for a nation, people, and dare I say a religion that spans national borders and any attempt at a neat definition for identity.

Although the majority of players who have put on that jersey have become citizens of Israel, I don’t see them as representing just the State. I also don’t seem them representing just the Land of Israel — any commentator giving a play-by-play will be quick to point out the dearth of purpose-built baseball diamonds in the country.

The Israeli national baseball team, more than anything else, represents Am Yisrael — the People of Israel. The guys on that team represent the diversity of what it means to be a member of the tribe.

During their respective at bats or outings on the mound, the players are introduced with stories of Holocaust-surviving grandparents, or the number of years they attended Jewish day school, and how each one made the decision to represent a team based on their heritage (Israel) rather than their country of birth (the United States). No other team in the world has so much binding its players together.

Hours ago, we experienced the heartbreak of seeing Israel lose to the Dominican Republic in the Tokyo Olympics. Once again, I had developed a routine for these early morning games. I would wake up, turn on the game, make coffee. Afterwards, instead of calculating the moment of inertia or preparing for AP exams, this time, I put on tallit and tefillin and davened Shacharit, the Jewish morning prayer service.

In my mind, what I did during the game and what I did afterwards, while operating in different spheres of Jewish experience, have equal weight in my responsibility to Am Yisrael.

The Israeli team wasn’t the best equipped amongst the six competing teams. Our bullpen was exhausted from early on in Game 1, our defense was sometimes messy, and it felt like the messiah would come sooner than we’d get a hit with runners in scoring position.

And yet, watching Team Israel play was magical. In what was already objectively Israel’s best Olympics ever (based on medal count), I got to see my favorite baseball team in the world — yes even above my Pirates and my late Papa’s Brooklyn Dodgers — take on the world’s best and hang in there, even surviving the elimination game against Mexico.

The thing about Jewish peoplehood is that it is shown in any number of ways. Some wrap tefillin and regularly attend shul. Some bake challah every week and pull out that family latke recipe on the coldest and darkest nights of the year. And some play baseball.

The amazing thing about the Israeli national baseball team is how, while technically representing the State of Israel, it is really here for all of us. Without needing to know Hebrew or Bubbe’s secret to fluffy matzo balls, anyone can tune in and support the People of Israel. (That is, if you’re willing to occasionally sacrifice some sleep.)

And even if not everyone can tune in, one can still take so much pride in knowing that, because of this team, baseball is being broadcast in Hebrew in the Jewish Homeland. There are members of the training staff sitting in the Israeli dugout wearing kippot. The people who celebrate my holidays, share my values and identify with my community are playing my favorite game for the world to see.

After my Papa’s funeral, my older sisters and I were waiting in the parking lot of New Montefiore cemetery on Long Island. I was in attire appropriate only for Papa’s funeral — dark suit, tie and a Brooklyn Dodgers cap.

A fellow mourner from a different service walked past us, pointed me out to his son, and said “See? Brooklyn Dodgers. It’s a Jewish thing.”

When I see that Israeli baseball team out on the field, regardless of if they are holding a lead against Cuba or being mercy-ruled by South Korea, I think to myself “See? Team Israel. It’s a Jewish thing.”