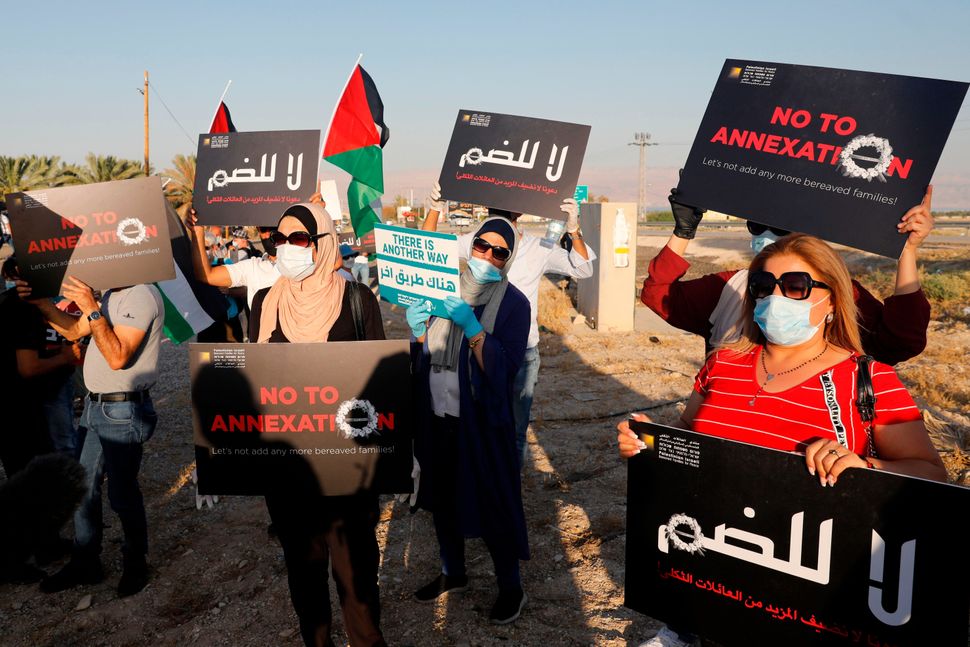 Palestinian and Israeli activists in peaceful protest outside the West Bank City of Jericho, June 27, 2020. Image by Ahmad Gharabli/Getty Images

Though ending this vicious regime depends on a multitude of factors, joint nonviolent resistance by Palestinians and Jews constitutes an essential element. We are both a part of this living, binational movement against the ongoing oppression of Palestinians and the Jewish supremacy upon which it is built.

Recent actions taken together by Jews and Palestinians in the occupied West Bank have exemplified the kind of co-created liberated future that we envision and exposed the violence inherent to Israel’s system of strict racial separation. With a single gesture, whether we are clearing land for a cinema, erecting a freedom camp or reclaiming a spring, our people have demonstrated that coexistence is possible when it’s based on co-resistance.

An inspired coalition of Palestinians, Jewish Israelis and international Jews broke ground for Hebron’s first cinema in 2016. Despite heckling from nearby settlers and a string of arrests by the Israeli police, the event created social momentum that jettisoned further direct action.

The next year, approximately 150 Jews and supporters linked up with Palestinian communities in the South Hebron Hills (in the West Bank) to erect the Sumud Freedom Camp on land belonging to Palestinians who were displaced by Israel in the 1980s and 1990s. The army responded by raiding the camp late at night, bludgeoning the activists with their military-style rifles and destroying their tents.

Another group of Palestinian and Jewish activists restored a road in the same area in May 2019. The Israeli army yet again resorted to violence, assaulting and arresting 17 of the 125 activists present.

A similar coalition reclaimed a water source from illegal Israeli outposts in January 2020. And this year, just as the cease-fire between Hamas and the Israeli army took hold, thousands of Palestinian citizens of Israel and Jewish Israelis rallied together to demand an end to the war, an end to the Israeli occupation and a shared future for both peoples.

This summer, the disparities between our two peoples have again been laid bare: Fully-vaccinated Israelis are heading back to the beaches while rubble from the brutal Israeli bombardment litters the streets of Gaza City. Israeli politicians are decrying the “terrorism” of Ben & Jerry’s decision to stop selling its products in West Bank settlements while Palestinian civil society protests the extrajudicial killing of its leaders and the mass incarceration of its youth. One group screams about ice cream, the other cries out for its human rights.

Every week, Jewish settlers attack Palestinians and encroach on more and more of their land — often in broad daylight and in front of soldiers who choose to not interfere or even offer the settlers support. Simultaneously, Israel and its accomplices in the Palestinian Authority are attempting to shut down nonviolent Palestinian resistance through continuous harassment, imprisonment, beatings and shootings, prosecution in draconian military courts and criminalization of the very act of peaceful protest itself.

No matter how peaceful the methods of resistance, Israel and their collaborators in the Palestinian Authority try to quash any independent Palestinian political organizing. By publicly conflating violent and nonviolent resistance, the Israeli government encourages both the oppressors and the oppressed to lash out in wild anger with whatever means are at their disposal.

But there is a strategic value in nonviolence that we must not forget. As a retired Israeli military commander once said privately to U.S. officials, “We don’t do Gandhi very well.” Massive Israeli firepower in response to Hamas rocket attacks may pass for self-defense among many influential decision makers in Washington, but strong-armed repression used against unarmed civilians in Sheikh Jarrah, Nebi Saleh or Silwan provokes resounding righteous anger and moral outrage the world over. Herein lies a weakness that we can exploit.

When Jews and Palestinians put our bodies on the line together to do nonviolent direct action, Israeli soldiers often use force against not just Palestinians but other Jews as well. And when the world sees the Israeli state punching and kicking Jews of conscience as they link arms with their Palestinian siblings, the State of Israel doesn’t look like the victim anymore.

On the contrary, by violently disrupting Jewish-Palestinian solidarity, Israel appears dedicated to apartheid even at the cost of Jewish safety. International actors will begin to question what exactly they’re supporting with their economic ties, diplomatic backing and military funding.

Jews and Palestinians pay a different price for our activism, yet we have more power together to transform the oppressive system into one that guarantees freedom and equality for all. We will engage in this struggle for the sake of both our nations, however long it takes.

Issa Amro is a leading Palestinian human rights defender and the founder of Youth Against Settlements, a group waging nonviolence against illegal Israeli settlements and racist discrimination in the occupied West Bank city of Hebron. Zak Witus is a writer and community organizer with IfNotNow, a movement seeking to end Jewish-American support for Israeli apartheid.

Zak Witus is an educator and political organizer. He holds a master’s in Middle Eastern Studies from the University of Chicago. Follow him on Twitter @ZakWitus