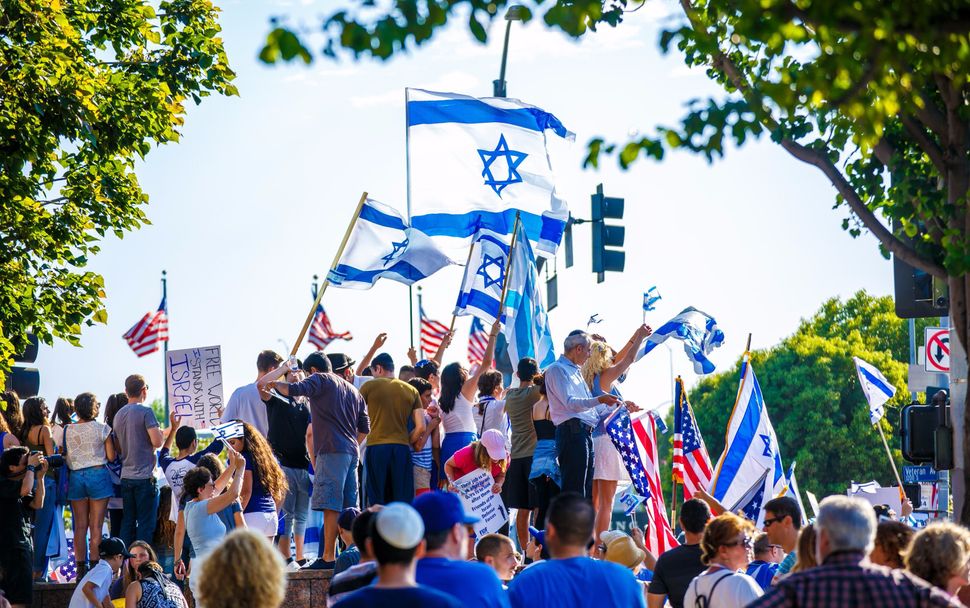 On Sunday night a new front opened up in the decades-long Israeli-Palestinian conflict: John Oliver’s mouth.

The comedian, whose commentary segments on his “Last Week Tonight” HBO series often out-report reporters, this time slammed Israel in its week-long battle against Hamas, the Islamic militant group that controls Gaza.

“Multiple children have been killed this week — eight in a single strike just yesterday — and the U.S. is heavily implicated here,” he said. “Lots is complicated here. But some things are pretty simple. One side is suffering much more.”

Oliver, like other celebrities who have weighed in on the conflict, shot up the Twitter ranking, getting praise from the Israel-bashers, attracting major counter-rants from the pro-Israel crowd.

It’s all so … predictable. The hot war over there is fought as proxy war over here, with the pro-Israel and anti-Israel sides duking it out in the media, all over social media and in city streets, where demonstrations supporting either Israel or the Palestinians took place last week.But the bloodless war here hasn’t stopped the bloody war there; if anything, it inflames both sides. Israelis and Palestinians rush once more into the fray, validated by the armchair warriors, flag-wavers, pundits and professional boosters.

But what if we on this side of the globe just … stopped?

Pollyanna-ish as it sounds, what if Americans didn’t take sides, or at least not either of the sides in this conflict? What if the reflexively pro-Palestinian and pro-Israel camps in the U.S. focused all their rhetoric, political action and funds on reconciliation and justice, instead of on assigning blame, scoring points, expressing outrage? They would still criticize their opponents, but they would criticize their own sides too, for any actions or words that hurt the larger aims of reconciliation, no matter the source.

Instead what we have is a kind of Palestinian-Israel Partisan Industrial Complex — groups that promote a one-sided take on the conflict, pundits who’ve planted a flag, politicians who mouth platitudes, social media armies that substitute memes for understanding, and then there’s the rest of us, whipsawed among the absolutists.

Meanwhile the Israelis and Palestinians go on fighting: three horrific conflagrations with hundreds of innocents dead, just in the last two decades.

“There are no winners in this escalation,” Muhammad Shehada, a Gaza-born journalist and activist, wrote in the Forward, “and civilians are certainly the ultimate bearers of the heaviest price.”

The best way for those of us in America to help these civilians is to change the object of our obsession. Instead of waving the flag for our respective sides, we need to ask ourselves, as Americans, this question: What can be done to advance the cause of reconciliation, and who is doing it? What actions destroy a just settlement, and who must put an end to those actions?

The more I pay attention to this conflict, the more I’m drawn to those voices who challenge the all-or-nothing party line of their own sides. In 2014 for instance, the Palestinian delegate to the United Nations Human Rights Council in Geneva, Ibrahim Khreisheh, told an interviewer on Palestinian Authority TV, in Arabic, that Hamas’ rocket fire from Gaza is a crime against humanity.

It’s a truth Hamas needs to hear from all those who care about Palestinians — and anyone who cares about Israel, like me, must care deeply about the fate of the Palestinians, as their fates are intertwined. Fighting clear Israeli injustices with missiles is destroying Gaza. There is no country on Earth that would not fight back relentlessly against its own bombardment, as Israel does.

On the Israeli side, it was former Prime Minister Ehud Barak, who similarly broke through Israel’s, and much of American Jewry’s, complacency when he told a TV interviewer in 1998 that if he were a young Palestinian, “at some stage I would have entered one of the terror organizations and have fought from there, and later certainly have tried to influence from within the political system.”

We here in America are wasting our time and money on partisanship when we should be focused on the many voices of reconciliation on both sides, such as Palestinian activist Abu Awwad, devoted to the nonviolent resistance against Israeli occupation; the Combatants for Peace, former Israeli soldiers and Palestinian militants joined together to end occupation and achieve reconciliation; and Palestinian activist Lama Abuarqoub, of Women Wage Peace, who told a reporter last week that despite the violence, Israelis and Palestinians have no choice but to reconcile in the land they share.

I understand the impulse to take one side — that’s the essence of a tribal conflict and we easily fall into tribes. But we are surely capable of questioning whether taking sides alone, in the long run, helps achieve an end to the violence.

American Jews need to find a way to support Israel without being enablers of its most self-defeating policies. Our rabbis, who demonstrate great moral clarity when Hamas starts firing rockets, need to do so also in the so-called quiet times, when Israeli policies box Palestinians into an inhumane status quo.

And the anti-Israeli voices need to find a way to help Palestinians that doesn’t involve giving Hamas carte blanche to oppress Palestinian dissent, squander another generation on war, and fire at, and kill, Israeli civilians.

Rob Eshman is national editor of the Forward. This column originally appeared in the Los Angeles Times. Reposted with permission.