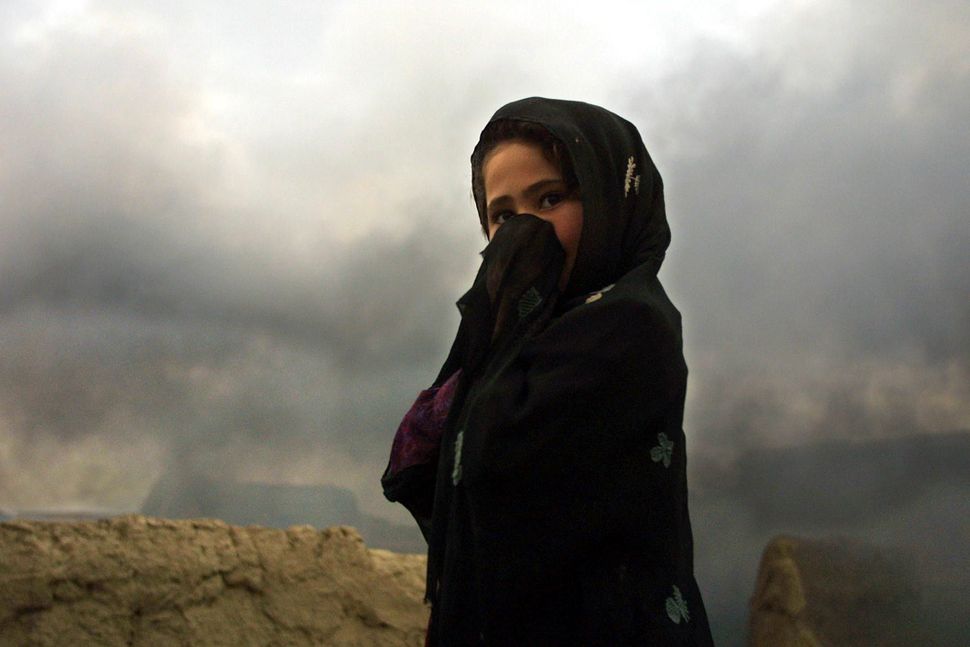 An Afghan girl stands late 01 November 2001 close to a brick factory in the village of Dasht-i-Qala , some 10 kilometers from the front line with Taliban forces, in the Takhar province. The US-led air campaign in Afghanistan entered a 26th day with Washington warning the Taliban regime to brace for more carpet-bombing of their positions across the country. By Joel Robine/AFP via Getty Images

Just weeks after U.S. forces and their allies in the Northern Alliance had routed the Taliban from most of Afghanistan, the NY Daily News assigned me to accompany an odd delegation to the country on a 24-hour visit.

It was Dec. 2001, and unlimited new prospects still seemed possible for the ancient land. I took off from JFK in a rickety old Soviet Antonov 225 cargo plane piloted by a crew of Ukrainians on a goodwill visit sponsored by Diageo, the liquor company that produces Guinness Beer and Johnnie Walker scotch, among other spirit beverages.

This was a strange initiative for a liquor company to put together. Maybe they saw a potential new market opening for their products in a country where the Taliban, citing Islamic law, had long ruthlessly enforced a ban on alcohol. But at least on the surface, the company’s heart seemed in the right place: The dubiously airworthy vessel carried 90,000 pounds of rice, sugar, cooking oil, blankets and other goods to be distributed to poor Afghans struggling to survive Kabul’s grueling winter — and six close relatives of New York firemen and cops who had perished just months earlier in the 9/11 attack on the World Trade Center.

Dubbed, “From Ground Zero to Ground Zero,” this was an effort, Diageo said, to show the people of Afghanistan that Americans, including those closest to those killed in the 9/11 attack, bore them no ill will.

“We’ve come to tell them we don’t hold them responsible for the actions of a few terrorists,” Detective Thomas McDonald of the NYPD’s Emergency Services Unit told me.

But things seemed to go off the rails in subtle ways almost from the start. As the plane taxied on the runway, a group of Afghan and international journalists waited below to document the arrival of the desperately needed humanitarian supplies — surely the p.r. photo-op that Diageo had been hoping for. A brother of one of the dead firemen, Joseph Higgins — who was himself a member of the NYFD — disembarked first to deliver some brief remarks on behalf of the group.

A voluble Irish-American Brooklynite, with a clear outer borough accent, the surviving brother described the delivery as the delegation’s own “Christmas present to Afghanistan’s children” as they suffered through one of the country’s harshest recent winters.

I could see the bewildered looks of the Afghan journalists on the tarmac. As urgently as the goods were needed, describing them as a “Christmas present” from an American liquor company seemed like a dubious way to connect with an overwhelmingly Muslim public whose traditionalist and fiercely nationalistic inclinations were a matter of fabled historical record.

I knew this from having lived and traveled in Afghanistan for six months earlier in my life, during the 1970s, shortly after I finished college.

In that very American way, these well-intentioned men had brought their open hearts and good will to the land the British dubbed “The Graveyard of Empires” after their own disastrous retreat from the country in 1842. More than a century later, the Americans made the mistake of thinking that their own good will was enough.

I knew it wouldn’t be then. And I feared what would follow as tens of thousands of similarly well-intentioned American troops and officials were primed to come in after them. Would this end like Vietnam, I wondered?

I had in mind not lines of desperate people trying to climb on helicopters from the roof of the U.S. embassy, but simply the cultural obliviousness of good men and women from across America who came year after year to build something in a land of which they had no understanding. Would they even know, for instance, about the tribal nature of the country that would lead Pashtuns to fear the Americans in roughly equal measure to the degree that secularly-minded Tajiks, Shiite Hazarra and Farsi speakers from Western Afghanistan rallied to their side?

In his luggage, the firefighter Higgins had also brought with him a chunk of twin-towers concrete and a gold bracelet engraved with his dead brother’s name to be buried in the Afghan desert after the group’s departure.

“I hope — maybe in 20 years or so — some Afghan will find these things and learn what Americans did to bring them freedom,” he said. That would be about now.

Near the conclusion of our trip, the delegation was brought to a girls orphanage run by women who had, until then, been forced to educate their charges secretly and at great risk to their own lives due to the Taliban’s ban on secular education of any kind for women.

I knew that the American Jewish World Service had been funding similar projects for years on Afghanistan’s border with Pakistan, where thousands of refugees were trapped. Now freed from this fear, the female educators showed their charges proudly demonstrating their scholarly knowledge onstage. Then, the woman who was director of the program came on and made a plea to the visiting firefighters and police officers that has rung in my ears down through the years.

“Don’t forget us,” she pleaded. “You’re here today. But we don’t know what the future will bring. Whatever happens, please don’t forget us.”

I haven’t. I probably never will.

I wonder whether a 20-year commitment in American blood and treasure to this woman’s hopes and dreams, capped by a terribly botched withdrawal that leaves Afghans who helped us behind, constitutes a fair response to her plea.