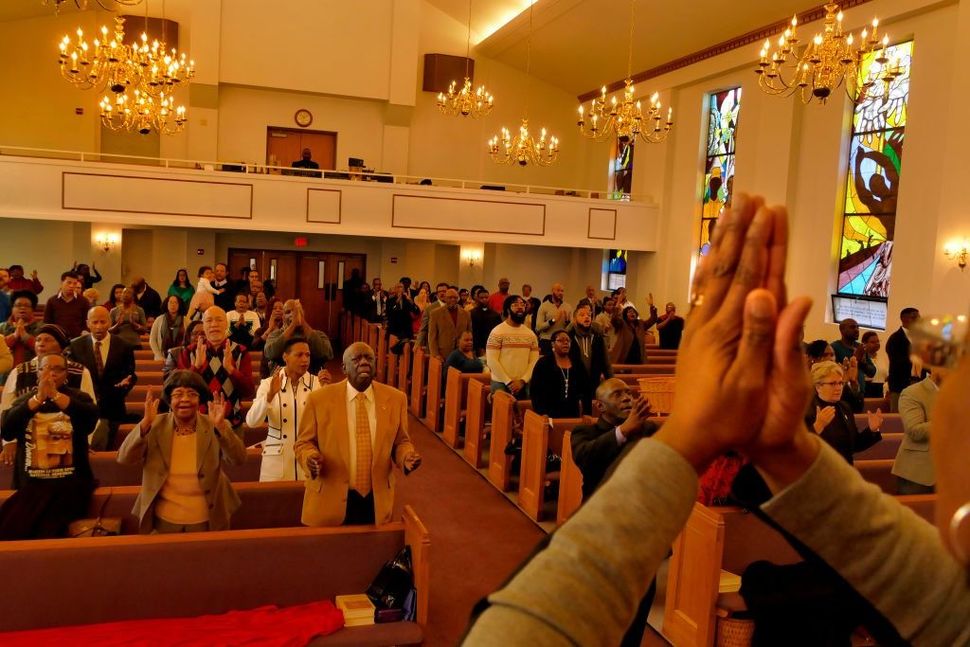 It will not surprise anyone that Christianity is alive and well in the South.

Take a stroll on a Sunday morning in Little Rock and you’ll see groups of young, markedly hip people with tattoos and asymmetrical haircuts gathering and chatting every few blocks. Children are everywhere, and the cheer is so contagious, you’d think everyone was in line for a Springsteen concert.

Instead, they’re going to church. And at least half of the people we meet, upon learning that we’ve moved from the East Coast five years ago, ask if we’ve “found a Church home yet.”

At first, the assumption that we must be Christian was irritating. Yet the more we talked about it, the more my husband and I — committed yet secular Jews, both faculty co-advisors to our respective Hillels — couldn’t help marveling at the enthusiastic attendance evangelical Christian spaces boasted. We started to ask the question: how do they do it?

For a while now, my friends and I — fellow Jewish academics and young professionals who grew up mostly in the Conservative movement — have been talking among ourselves about what we perceive to be a crisis in congregational Judaism. Most of us had strong starts in the community, and attended Jewish day schools. In our 20s, many of us drifted away from any form of practice — assuming that, once we had families of our own, we would “come back.”

Well, most of us haven’t. My fellow Jewish academics tout their identities publicly and draw on them in their scholarly work. Many of my friends lead rich Jewish lives — but they do so on an alternative circuit of homegrown chevrutot and minyanim without traditional frameworks. Our Jewish selves are still very important to us — they just don’t express themselves in the synagogue setting.

Our parents took us to services every week as children, so why are we so loath to keep the tradition going? And what would it take to bring us back?

I believe that there are several lessons we can draw from Evangelical Christians if we want to revitalize synagogues struggling to fill seats.

As we start to build families of our own, many of us balk at the high prices of Jewish day schools and summer camps. I myself was only able to attend day school because of the generous scholarships provided then to our wave of Russian Jewish immigrants. Though I dreamed of attending Camp Ramah, it was unaffordable for my mother. Every summer, my aunt laments that she can only afford to send my cousin for a few weeks of the more reasonably priced Chabad day camp.

The institutions I attended did offer financial aid. Yet the amounts differed based on income bracket and—as everywhere in American culture— those of us in the middle tend to get squeezed. It would be wonderful to see Jewish religious and educational spaces become even more financially inclusive.

Christian schools and summer camps, in contrast, tend to be much more aware of their mission to cater to low- and middle-income families. Churches often boast the most affordable preschools in town. If the problem is the price of kosher food, why not have our schools and camps go vegetarian? Why not institute even more sliding pay scales that would allow all Jewish families to send their children? I am certain that there are challenges here I know nothing about—yet who are we if not an inventive people?

Lesson 2: Meet people where they’re at.

Sunday morning in Little Rock is remarkable because church is perceived as something fun, rather than an obligation. One way pastors and youth outreach coordinators achieve this is by being open to the cultural tastes and preferences of their congregations, paying attention to the latest bands, movies and games. They’re on Instagram and TikTok. A student in one of my classes last semester asked if he could write his final paper on the Hillsong UNITED concert documentary. It was my first time hearing of the Christian rock band with millions of fans; when I asked the class how many of them were aware of the band, nearly all of the students raised their hands. We haven’t had anything like it since Matisyahu.

I’m not advocating for a slavish adherence to the latest trends or artificial attempts to make Jewish content “cool,” but rather a cultural openness and a willingness to stay with the times. Chabad already does this well. (Especially Chabad on Campus.) Why can’t other Jewish organizations, too?

Attending a variety of services with Christian friends, I have been impressed by the way Christian clergy seem to view sermons as opportunities to further congregants’ emotional intelligence. Consistently, I have heard pastors transform stories from the Bible into lessons on love and forgiveness, of course, but also family and relationship dynamics, on working through betrayal, addiction, and loss, and finding joy in the face of adversity.

Sermons in the Modern Orthodox and Conservative synagogues I have attended, by contrast, have a tendency to stray into the realm of shtetl anecdotes, obscure aspects of Jewish law (how many days before Passover should we start to clean out the chametz?), and self-congratulatory tangents (what genius wasn’t Jewish?)

The pandemic made this contrast only more apparent. My friend Alexa, who attends a Protestant Church back in Boston, said that she looked forward to Sunday now more than ever. Her church used breakout groups on Zoom to give parishioners a chance to voice what they were most grateful for and most anxious about that week, and to identify an intention for the service that followed. She was shocked when I told her I had never seen a similar practice in a synagogue – that there is space in the liturgy for us to make direct requests to God silently, but not to share those thoughts, worries, yearnings, or feelings of gratitude with the community.

Revitalizing congregational Judaism in the era of mindfulness and intentionality would involve making sure that it speaks to us in the present in a language we can understand. It would involve connecting each week’s Torah portion to emotional experiences that are complex and often difficult to acknowledge, and finding ways to affirm the communal even as we make space for the personal.

L’dor v’dor, from generation to generation, doesn’t have to mean unwavering transmission of tradition; it can mean adapting to each generation so as to make that tradition sing.

Many of us love to note all the customs Christianity has borrowed from Judaism – baptism, the timing of Easter, the recitation of the Psalms. Perhaps it’s time we took a page from their book?

Masha Shpolberg is Assistant Professor of Film Studies at the University of North Carolina—Wilmington, where she also co-advises the student Hillel. She has been working remotely during the pandemic from Little Rock, Arkansas.