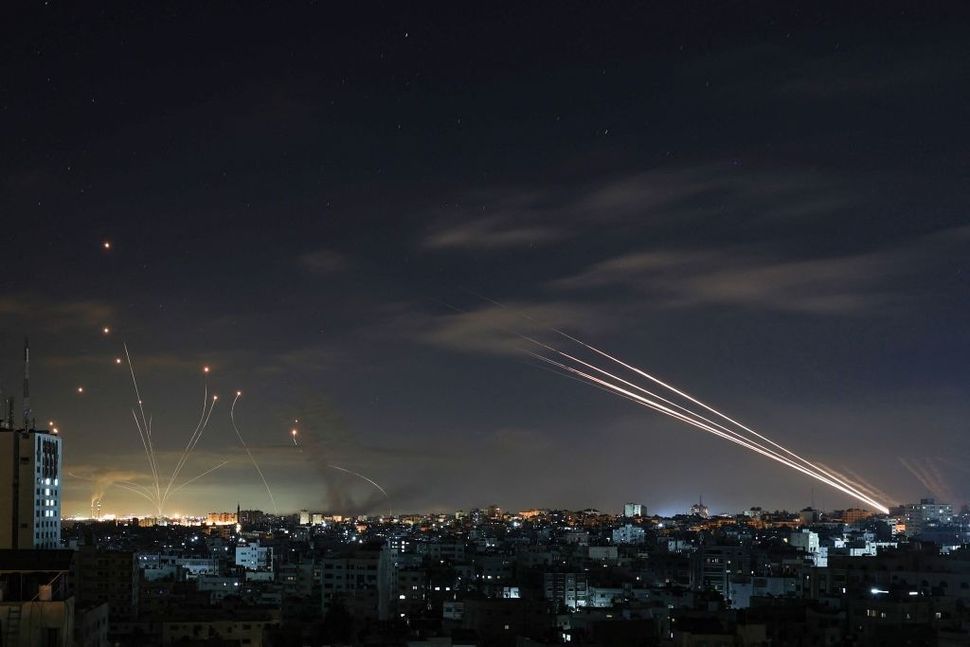 The first time I sprinted to a bomb shelter, it was a stairwell in a rental-car agency in Tel Aviv, Israel.

The siren blared as my then-Burning Man fling (now husband) and I were finalizing the paperwork. He grabbed my hand and shoved me into the stairwell along with several employees. Ten seconds later, there was a deafening BANG.

The building shuddered so violently I was sure it was a direct hit. A second boom followed, closer though not as loud. When the all-clear sounded, we stumbled, blinking into the sunlight, and learned that the first boom had been Iron Dome — the missile defense system largely funded by the United States — and the second, debris from a missile crashing onto a dumpster just outside our stairwell.

Iron Dome, first deployed in 2011, intercepts missiles over populated areas; it has zero offensive capabilities. On Tuesday, Congressional Democrats stripped $1 billion dollars of funding for the system from their stopgap budget package, a move Politico attributed to dissent on the party’s “left flanks.”

After mounting pressure on Wednesday, they pivoted and introduced standalone legislation to restore the $1 billion in funding. Still, the move by progressive politicians suggests a naive approach to Middle East policy that smacks of the misleading Instagram infographics slides that circulated so prevalently during May’s conflagration between Israel and Hamas militants in the Gaza Strip. It is an influencer-informed bad decision that sends the frank message that dead Israelis don’t matter. It speaks to a profound lack of understanding among the U.S. left about Palestinian-Israeli conflict.

On a certain level, I empathize with the members of Congress who I believe misguidedly pushed to exclude Iron Dome. I, too, want to end the Israeli occupation of the West Bank so that both Israelis and Palestinians can live in peace. I, too, believe that the international community can do a much better job of putting pressure on Israel to stop building settlements in the West Bank, for example.

It is unclear who, exactly, removed the Iron Dome funding from the bill, though Politico reported that the Democrats who successfully fought its inclusion in this stop-gap spending package are the same ones who opposed an arms sale to Israel during the most recent shooting war between Israel and Hamas militants in May of this year. Leader of the Congressional Progressive Caucus Pramila Jayapal complained that the military aid to Israel was “slipped into” the unrelated legislation at the last minute, which again, is frustrating. But given the context that Iron Dome’s continued financial support is in the 2016 Memorandum of Understanding signed by President Barack Obama, why even make Iron Dome an issue here at all?

Rep. Jamaal Bowman, a New York Democrat, complained to reporters that leadership thrusts bills on their desk with no time to look them over — a problem that I again, can empathize with to a point. Politicians have to read lots of bills whose dry language contains very real consequences for Americans, and I certainly would not sign up to do that. However it is wildly obtuse to consider Iron Dome, a defense system that does no harm to Palestinians, as controversial enough to warrant more discussion, let alone a retraction of its funding.

“This isn’t new funding, or unusual funding, or a precipitous increase in funding,” Rep. Elissa Slotkin, a (Jewish) Democrat from Michigan, noted in a tweet on Tuesday. “So to target Iron Dome now isn’t a genuine concern over the system, but rather the desire to attack something – anything – related to the State of Israel.”

In 12 days before the cease-fire this past May, Hamas and Islamic Jihad shot over 4,369 rockets into Israel. Two-thirds of them fell into unpopulated areas, but over 1,500 directly targeted major population centers. Iron Dome was staggeringly successful in preventing casualties, with more than 90% of the rockets being shot down safely and only 12 deaths in Israel from the rocket attacks. Iron Dome’s technology does not harm Palestinians, it does not expropriate Palestinians homes and land. It is not a tool of the occupation, but for defense.

The funding question of Iron Dome has been punted to the annual defense-spending bill in 2022, where according to House Rules Chairman James McGovern, D-Mass., it will assuredly pass. President Biden has additionally reassured Israeli Prime Minister Naftali Bennett that Iron Dome is a priority and the money will come through. Yair Lapid, Israel’s foreign minister, called Tuesday’s removal of the funding “a technical postponement.”

But the exclusion of Iron Dome, even be it temporary, reflects a deeper, much larger problem in progressive discourse about the Israeli-Palestinian conflict. It indicates an impulsive, superficial understanding of the history of the region, like when close friends of mine would reflexively share antisemitic and anti-Israel social media graphics, whipped rightfully into a frenzy seeing tragic images of Gazans in rubble.

Instead of focusing on educating and supporting the next generation of Palestinian leadership to remove Mahmoud Abbas’ chokehold on the Palestinian Authority, or pressuring Israel forcefully and directly to stop building settlements, or pouring investigative resources into the dubious American 501(c)3’s that work to expel Palestinians in Sheikh Jarrah for the Judaization of Jerusalem, progressives are holding up the most effective, non-offensive strategy Israel has. The only explanation I can think of is either that they’re ill-informed or they want dead Israelis, neither of which brings me comfort.

I speak regularly with Palestinian and Israeli friends in the diaspora about how impossible dialogue feels here versus inside the holy land, because anger and misinformation online obliterates respectful engagement. I get frustrated at the social-media rhetoric, with its brightly colored carousels explaining fact-less drivel like Jews have “colonized” the term antisemitism, and Israel should be spelled in quotation marks because it doesn’t (deserve to) exist.

But I expect more from elected officials. Our previous president made decisions based on what Twitter and his favorite TV shows said; are Democrats now making policy based on online pseudo-woke mobs? They not only have the resources but the responsibility to better educate themselves, especially with decisions that carry life-and-death consequences.