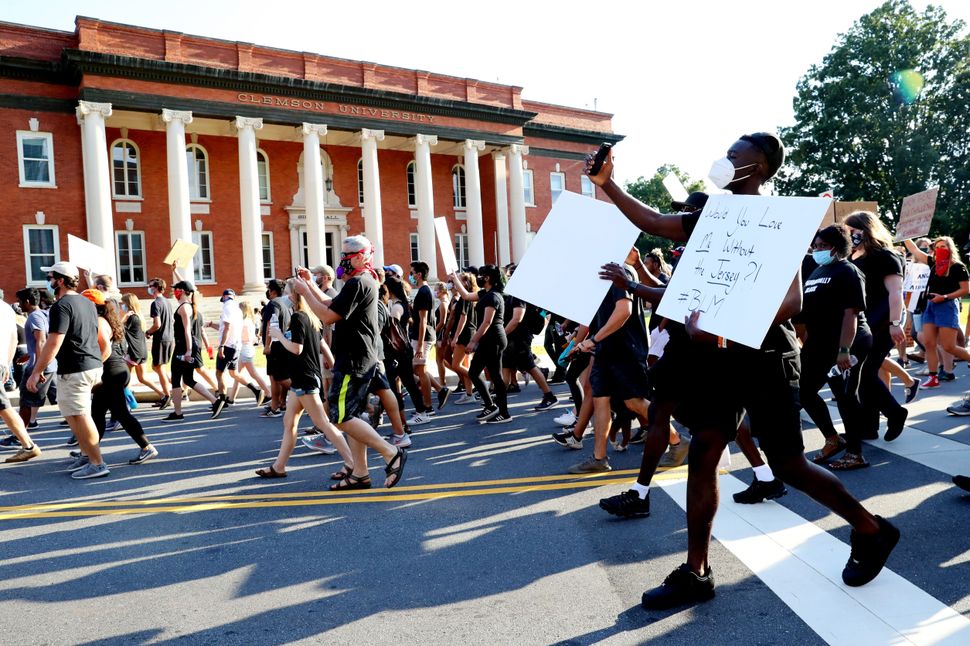 Demonstrators participate a “March for Change” protest on the campus of Clemson University on June 13, 2020 in Clemson, South Carolina. The protests were in response to the death of George Floyd, an African American, while in the custody of the Minneapolis police. Protests calling for an end to police brutality have spread across cities in the U.S., and in other parts of the world. By Maddie Meyer / Getty Images

One of the hallmarks of Jewish tradition is its intense focus on debate and disagreement. Unfortunately, it appears that this value is being lost on many of the nation’s younger Jews — namely those currently enrolled in colleges and universities.

A just-released survey from the Foundation for Individual Rights in Education captures the voices of over 37,000 students at 159 colleges and provides empirical insight into the current state of speech and expression on campus today. The picture is not good.

The data show that one-third of all students think trying to disrupt and shout down speakers when they visit campuses is sometimes or always acceptable. Among Jewish students surveyed, 40% reported feeling this way.

As for blocking other students from attending a campus speech and hearing potentially controversial ideas, 13% of students surveyed, and 18% of Jewish students, think this is sometimes or always acceptable.

Two-thirds of Jewish students — compared to just about half of students nationally — answered that blocking other students from attending a campus speech is justifiable.

These data suggest that Jewish students are more open to the idea of shutting down speech and the dissemination of ideas than other college students. How are we to understand these troubling findings?

Political identity is a good place to start. Like American Jews overall, Jewish college students tend to be Democrats. The data show that 54% of Jewish students surveyed identify as a Democrat, compared to 35% of students surveyed overall. When you include self-identifying Independents who lean Democratic, 67% of Jewish college students fall into the Democratic column compared to a lower national figure of 55%.

In this survey, identifying as a Democrat strongly correlates with espousing anti-free speech positions.

The data show that 81% of Democratic identifying Jewish students believe that there are cases when shouting down speakers is acceptable, compared to a much lower 59% of Jewish political independents and leaners and just 44% of Republicans.

Similarly, almost 60% of college Jewish Democrats maintain that blocking their peers from hearing the ideas of others can be justified, while slightly more than a third of Jewish Independents and leaners and a quarter of Jewish Republicans feel the same way.

Most troublingly, 27% of Democratic students surveyed responded that it is acceptable to use violence to stop a campus speech, though the number is 22% for Jewish Independents and leaners and 17% for Jewish Republicans.

This data is deeply upsetting to me as a professor who has watched collegiate life change drastically over the past two decades. One of the great values of an American collegiate experience is that students have the chance to engage deeply with differing opinions. To this day, I am grateful for the cornucopia of people, traditions, views and cultures that I was able to engage with two decades ago when I, then a fairly conservative Jewish teenager, left the East Coast to attend Stanford University.

I would be lying if I said that there were no evenings in college when I felt hurt, misunderstood, shocked and angry when my ideas were challenged and came into conflict with others. But there were far more nights during which I was able to connect, learn and grow in ways unimaginable to me in high school. I certainly recall the frustrations and agony of being challenged, but I remember more powerfully the ecstasy of having my mind opened up to new ideas and changing my opinions when I heard someone or something new.

While I, along with significant numbers of other students, did not like nor agree with the ideas shared by many of the speakers we heard, their perspectives were always worth hearing and then debating late into the night.

Sadly, my undergraduate experience of being able to hear, respond to and then reject or accept a plethora of views is under threat. Today, cancel culture runs rampant on our college campuses, and viewpoint diversity is no longer considered a sacred, core value in higher education — and Jewish students seem to be helping lead the charge to silence others, missing out on genuine opportunities to learn, grow and connect.

Perhaps many Jewish students think that they occupy a noble place on the front lines of cancel culture in the spirit of social justice. But these progressive and woke impulses are misguided and ignore another equally important Jewish precept — real discourse which involves learning, listening and debate.

Discourse is so prized and cherished in Jewish thought and history that Judaism has sometimes been called a “culture of argument.” Jewish students — and all students for that matter — must recognize that true equity and inclusion must include viewpoint diversity, respect for real and meaningful political differences and outlooks and embracing a multitude of ideas — even if they make some members of the community uncomfortable.

Social justice values are certainly important, and a big part of Jewish thought. But they do not override the virtues of argument and respecting viewpoint diversity.

Both the Jewish community and our system of higher education have long embraced the idea that a competition of ideas is foundational to free and prosperous societies. The Jewish community cannot lose sight of one of our unique and virtuous features.

Instead of leading the charge to silence speech, our students should be doing just the opposite, demanding more speech and more ideas, not enforcing a culture of silence and cancellation.

Samuel J. Abrams is professor of politics at Sarah Lawrence College and a nonresident senior fellow at the American Enterprise Institute. To contact the author, email opinion@forward.com.