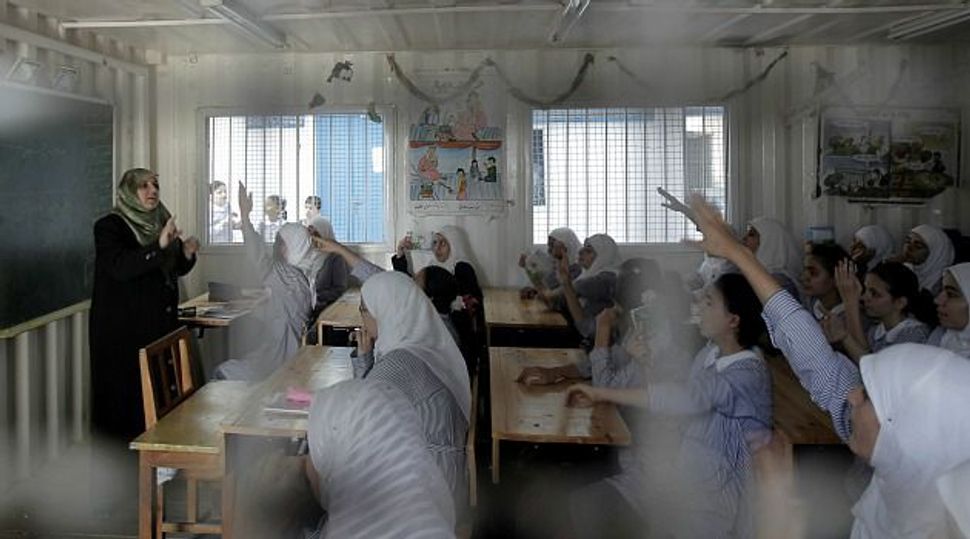 Blindsided: Some members of an advisory panel say they were taken aback by the release of a report that cleared Palestinian authorities of using textbooks to encourage hatred of Jews or Israel. Image by getty images

Muhammad Shehada’s Op-Ed “Palestinian Textbooks aren’t the problem,” published in The Forward on Oct. 14, laments the fact that the Palestinian Authority’s educational materials and their incitement toward Jews and Israelis has recently gained traction in Europe.

European policymakers have researched the violence and antisemitism within Palestinian textbooks for years, passing legislation in 2018, 2020 and 2021 condemning it. They hoped for change, only to be blithely ignored by the Palestinian Authority. A recent study by the Georg Eckert Institute, surveying PA textbooks, confirmed this lack of reform in its findings, noting that while the PA includes values of human rights, the textbooks “do not apply these notions to Israel” and are “not carried through to a discussion of the rights of Israelis.” These notions are taught primarily in relation to violations of Palestinian rights by “Israeli protagonists”.

In other words, Palestinian textbooks are in fact very much the problem.

Shehada argues that Palestinians must erase their culture and history in order to be considered palatable to European lawmakers. This is not the case. While the GEI report on the Palestinian textbooks made valiant efforts to explain away some of the incitement they identified in the textbooks, the sheer volume and extreme nature of the hateful rhetoric that remains results in a curriculum that glorifies terror and violence.

The report points to ancient antisemitic tropes such as treachery and greed being applied in a modern context, a type of racist discourse that was condemned by the United Nations CERD Committee report. Violence against civilians is characterized as “a legitimate means of resistance” central to the narrative of historic “Palestinian nation-building”. Extremism is incongruously evident, even in math and science exercises, where Newton’s Second Law of Gravity is taught using Palestinians attacking Israeli soldiers with slingshots.

Speaking in parliament about the GEI report, EU Parliament Vice-President Nicola Beer of the liberal Renew Europe party stated: “Depicting Jews as dangerous, demonizing them, perpetuating anti-Jewish prejudices is just upsetting. But reading about schoolbooks – and here I speak as a mother – glorifying terrorist Dalal al-Mughrabi, presenting cold-blooded violence against civilians, including a lot of children as resistance, leaves me speechless.”

The Palestinian curriculum has taken a radical path, removing references to Israel, Jews and peace agreements with Israel (save for one cursory mention of the Oslo Accords, which is doctored to remove the section about coexistence with Israel). The language used to describe Israel was changed to terms like “Zionist Entity” and “Zionist Occupation.” Previous references and sections dealing with ancient Jewish history in Palestine, the Jewish connection to Jerusalem, and maps titled “The Northern Kingdom of Israel” and “The Kingdom of Judea” were also removed.

The PA is doubling-down on violence and antisemitic tropes as countries across the region are in the process of reforming textbooks. The UAE produced a remarkable Moral Education Curriculum, the first regime in the region to separate moral education from religious education. Jordan completely restructured Islamic textbooks, now more conciliatory toward non-Muslims. Where previously Jordanian textbooks exclusively portrayed people as religious Muslims (men with beards and women wearing hijabs), they now depict both religious and secular people. In an extraordinary reform, Saudi Arabia expunged antisemitism, jihad and homophobia from its curriculum.

In what is considered a left-wing curriculum by many Israeli parents, some Israeli texts employ the language of “occupation” when referring to Israeli control over Palestinian territory and citizens. Students are taught multiple narratives, including one textbook that directly explains how Israel “expropriated Palestinian lands.” Shehada’s article calls for Israel to teach about Deir Yassin and the Nakba, which Israeli textbooks do. A Palestinian perspective of the 1948 War is referred to as “the Catastrophe” [Al-Nakba]. The issue of Palestinian refugees is discussed, and the forced expulsion of Palestinians in 1948 is presented to students. The Hebron Massacre, omitted in Palestinian textbooks, is taught in an Israeli textbook and includes material about Palestinians who protected Jews in Hebron. In one textbook, students are even taught that “since 1967 Israel has controlled more than three million Palestinian Arabs, who have no citizenship rights and are subject to the rule of military occupation.” Another features a poem by the Palestinian national poet Mahmoud Darwish. There is discussion of a Palestinian collapsing at a checkpoint in a lesson about human dignity, a subtle acknowledgement of an occupying infrastructure.

All of these details paint a picture of an Israeli curriculum that is actively attempting to present a balanced view of the region. Israeli students live under the constant trauma of murderous Hamas and Hezbollah rocket fire and the threat of the next Palestinian terror attack. But they are taught empathy, respect for the other and to desire peace, as are students in other conflict zones around the world per UNESCO guidelines.

The author maintains that textbooks reflect — which is to say perpetuate — a lived reality. This is a bleak perspective. Textbooks must do so much more. They are the key to fostering peaceful, tolerant societies of the future and to offering hope to children. Palestinian students deserve better than the relentless, dark and hateful indoctrination to which they are subjected every school day.

Marcus Sheff is CEO of The Institute for Monitoring Peace and Cultural Tolerance is School Education (IMPACT-se). IMPACT-se is a research and policy institute that analyses education to encourage standards of peace and tolerance as derived from international declarations and resolutions and presents policy recommendations to decision-makers.