Divorcing your husband is tough. Separating from your synagogue is harder 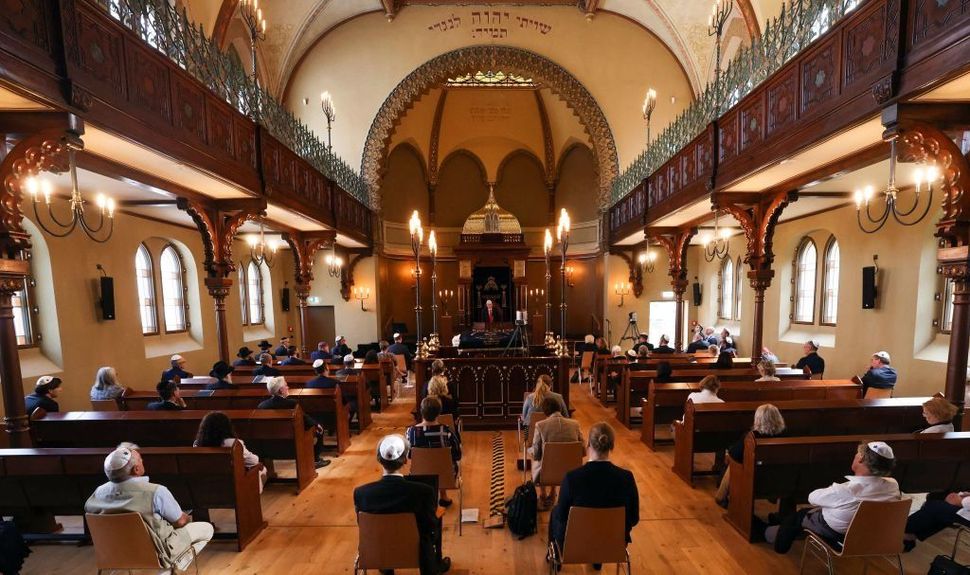 President of the Central Council of Jews in Germany Josef Schuster speaks during the ceremony marking the reopening of the Carlebach Synagogue in Luebeck, northern Germany on Aug. 12, 2021. By Christian Charisius/POOL/AFP/Getty Images

For me, family and synagogue have always been intertwined. Growing up with unhappy parents, shul became a refuge where I felt contained and coddled by ancient stories and unchanging rituals. I looked forward to raising my own children with a close connection to a congregation.

However, when I married a resolutely secular Israeli, he made it clear he would never step foot in a synagogue. His decision compounded the loneliness I already felt in the marriage, and we divorced after six years, when our daughter was three. Alone with her, Shabbat dinners felt particularly isolating.

I went looking for a synagogue community after my divorce with a hungry eagerness. The first time I visited the Conservative synagogue in our neighborhood, it felt instantly familiar. The melodies, the sanctuary, even the smell of the prayer books evoked memories of comfort and belonging. I pushed aside my own lack of belief in God: the hope of instant community beckoned.

As we settled into our new spiritual home, I quickly realized I was one of only a very small handful of single moms in the congregation, but I gave that little thought. The important thing was that we were no longer alone on Shabbat. The invitations poured in, more than I knew what to do with.

We were grateful to be part of something, and quickly dove into our new lives. I sent my daughter to preschool there, then to twice-a-week Hebrew school. I attended services regularly, sat on committees and even spoke at Israeli Independence day. I allowed myself to dream that my daughter would have a bat mitzvah, even a wedding, within the now familiar confines of the beautiful sanctuary. Wasn’t this the true meaning of family? Of community?

The rupture was so small that at first I couldn’t see it. It arrived in the form of a letter from the assistant rabbi when my daughter began fourth grade, outlining the attendance requirements for her upcoming bat mitzvah. I quickly realized these requirements would be impossible for her to satisfy, as my daughter was with her father every other weekend. He would never permit his time with her to be taken up with shul.

I assumed that the synagogue would be flexible, until the moment I received a curtly worded letter halfway through that year: “your daughter’s bat mitzvah is in jeopardy.” If she didn’t step up her service attendance, she would be dropped.

“Do you really think you should have an exception made because of your…situation?” the rabbi frowned, after I’d requested a conversation to clear up the matter.

“You mean that I’m a single mom? That’s the situation you are referring to?” I was at a loss. “Look at the number of weekends I have her, and what the requirements are, how can I do that?”

“I think you need to question you and your daughter’s commitment,” she repeated, blandly.

“But I have literally brought her every weekend I have had her,” I sputtered. She looked at me blankly, collected her papers and stood up. I tried to hold back my tears.

It was the beginning of the end. Before long, the rabbi stopped talking to my daughter altogether and avoided me when she saw me. Most days, my daughter came home from Hebrew school in tears. I was baffled at how uncomfortable my synagogue friends were by my situation, and at how rapidly the transition from being an insider to an outsider happened. Friendships I thought were abiding turned out to be brittle. In the weeks that followed, the invitations to Shabbat dinners and events all but dried up.

One day, unprompted, my daughter decided to write the rabbi a letter about what she felt. Innocently convinced she could fix the situation, her large, loopy, cursive 10-year-old handwriting filled four pages.

Every day, she’d ask: “Has she responded yet?” And every day I had to say “not yet. I’m sure she’s very busy.”

After five weeks of silence, I appealed to the head rabbi. In a final terse exchange with both rabbis where it was made clear that my daughter would never be “welcome” to have a bat mitzvah there, we resigned. What had felt like a safe harbor in my post-divorce life had become a stormy and treacherous sea.

Leaving my marriage had been my decision, and I felt no regrets. But this left me bereft in a new way. It was not only the sorrow I felt for the loss of close relationships I’d had for seven years, but a betrayal of the values I thought we shared, and a strong sense of guilt for having exposed my daughter to so much pain. In the aftermath of this breakup, there was no community, no family to lean on.

In the weeks following, I faced the return of those same disquieting questions that had attended my divorce: had I failed? Or was I scrambling to please people I no longer respected? If so, why did their rejection feel like a dagger?

I questioned my connection to organized religion altogether. If this was how a religious community treated difference, what was the point? For a while, I wondered if it was even worth trying to go out and find yet another synagogue to join.

But I did, this time with a determination to find a congregation that emphasized social justice, demonstrated an egalitarian leadership and held progressive views on Israel. And I found just such a place.

The year that my daughter had a bat mitzvah, our new rabbi asked her to deliver a sermon at the Rosh Hashanah service. Confronted with the same fiery spirit that our former rabbi had faced, our new rabbi made no attempt to extinguish it; she encouraged it.

The synagogue’s congregation swells to more than a thousand on the High Holy Days, and my ex-husband and I exchanged nervous glances as our little girl walked onto the stage.

“Patterns serve a specific purpose, but the new year is also a time to ditch those patterns that we have fallen into, emerge fresh and ready to try new things,” she said, her voice reaching the far edges of the crowd. “The shofar is a reminder of how we begin, what we hope to walk into the new year with, and what we hope to leave behind.”

Her speech cut right to my core. I realized that being understood, uncertain and difficult as that process can be, is ultimately more valuable than the seductive certainty of belonging.

Synagogues, like families, can be confining or liberating, alienating or nurturing. Happy families aren’t a birthright, and neither are communities. My daughter’s words reminded me that they are created by consistently asking ourselves hard questions — and, more importantly, by paying attention to the answers.

Divorcing your husband is tough. Separating from your synagogue is harder