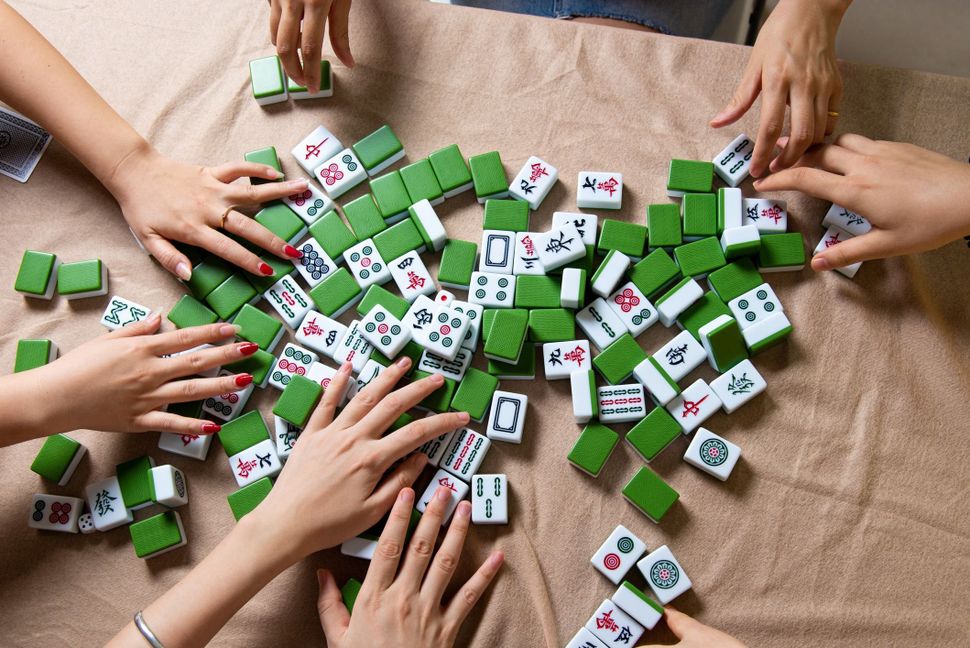 A game of mahjong. By iStock

I am the least impulsive person I know. I don’t jump into things — I wade. It took me two years to utter the words, “I want a divorce,” even when I knew I desperately needed to; I update my Fresh Direct cart at least four times before ordering; and I research trips beforehand as if I’ll be graded.

So, when at 44, I got pregnant five months after meeting a man, every single person who knew me scratched their head in puzzlement.

What they didn’t know, what I barely glimpsed in myself, was the deep longing I still harbored for a fantasy family: that shiny, happy unit I see brunching at sidewalk cafes near my apartment on Sundays. Maybe one of the kids is coloring a book or reading; one of the parents is draping an arm loosely over the other’s shoulder as they chat, their chairs touching. In my fantasy, they argue, but never bitterly or contemptuously; the children feel safe and loved; and none of them ever feel alone. It wasn’t just that my marriage was nothing like that fantasy, neither was my childhood.

After my divorce, I asked myself, “Why do we have to define family in a traditional way? There are lots of ways to be a family.”

And I meant it — I was keenly aware of how lucky I was to have meaningful work I loved, great friends, a rich synagogue community, my own apartment and a wonderful daughter.

I was caught off-guard, then, when I met a kind man with soft, chocolate brown eyes and a seven-year-old daughter, the same age as mine, who loved me with a force I had never known. When our children met and fell in love, a mere three weeks into our relationship, it was all over. I cast aside my doubts and leapt.

I should have known that by opening my heart I was laying siege to my own defenses. Their second playdate turned into an imaginary wedding ceremony for us, complete with rings they twisted out of purple pipe cleaners. When he suggested we have a baby together two months later, I scoffed at first. “A baby?!”

“Why not?” he answered. It felt like falling off a cliff. The dormant longing for a fantasy family, suddenly so closely within reach, stirred to life.

It was the ultimate do-over: two divorced parents had a chance to correct their mistakes. It was like an after-school tv special; the story felt seductively redemptive. Besides, I told myself, having a baby probably wouldn’t happen anyway — I was 44 with a history of multiple miscarriages.

When I became pregnant a mere three months later, we were both stunned.

Of course, the reality of pregnancy and childbirth at 44, in a new relationship, was a far cry from a tv special. In the cold light of day, every romantic candle-lit restaurant turns into just another musty space with cracks in the floor and peeling paint on the walls. For us, the harsh light was cast by a difficult pregnancy and an even more difficult first year after birth.

When my oldest daughter was born, I couldn’t get enough of her baby skin, her sweet milk smell; I felt drunk and exuberant on new mom hormones. So I was little prepared, after the birth of my youngest daughter Dahlia, to sink into a depression so deep it felt like quicksand.

Unlike my first born, who had curled into my body like a comma, Dahlia twisted and turned in my arms, unable to find comfort. Nothing I did soothed her; she was all sharp angles and restless movement.

I felt so much shame — here was this miracle conceived at 44, the missing piece to my fantasy family — and I could not seem to console or connect with her.

For hours each night I rocked my fretful body, trying to muffle my sobs, while everyone else slept.

In those early months, my only relief came from playing mahjong.

Each Monday, four women, with little connection other than a love for the ancient Chinese game of tiles, convened in one of our homes. I looked forward to these games fervently — a respite from the chaos and despair that had become my life. The rumbling in my head gave way to the still, satisfying click of the tiles: 4 bam, 6 krak, 2 dot.

Confusion over my estrangement from my daughter yielded to the ordered calculus of the board: looping between possible hands, figuring out which tiles to keep or discard, scanning for what had already been thrown out.

The familiar routine felt so peaceful, more ceremony than game. Running my fingers along the curved surfaces of the tiles, compact and smooth as well-worn beach glass, I could breathe.

Over time, whether it was the influence of the game or sheer exhaustion, I found myself letting go of what wasn’t working with my daughter and embracing, even reveling in, all the ways my life has changed as a result of her birth.

Dahlia’s father and I might have two homes, but we celebrate holidays and birthdays together. Our oldest daughters, though unrelated, feel like sisters. We call each other when she does something impossibly charming that only we will appreciate. It might not be the perfect after-school tv special, but our households are deeply, inextricably intertwined. I don’t feel alone anymore.

I’d like to say I recovered from the pull of the fantasy family, that the new one I have crafted, beautiful and strong in its broken places, is enough. But some fantasies die hard.

I still wince a little when I pass those families in sidewalk cafes. The difference is that I have my own path now. It might be more complicated than I expected, but it’s rich and full and complete.

I used to use mahjong to escape, but I no longer have the urge to run away from my life. Instead, I just enjoy the game.