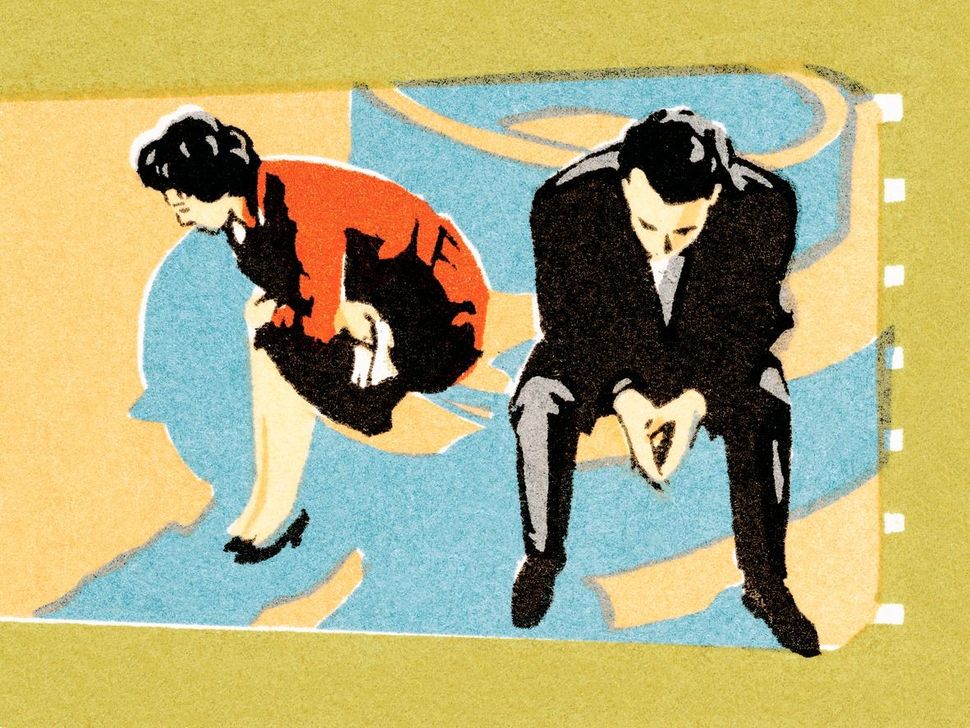 I’ve co-parented with a husband I loved, a husband with whom I was miserable but who was on the same parental page as me, and an ex-husband who was my good friend. Now, for the first time, I am co-parenting with an ex-husband with whom I have an acrimonious relationship and who has increasingly divergent ideas from my own about parenting our two young children. (Please note: this is all the same man. I’m 32 and have only so much energy.)

As Rosh Hashanah approaches, the theme of forgiveness and the chance at a fresh slate looms everywhere, from school to synagogue to every single mailing from every single Jewish non-profit ever — I find myself ruminating on how to clean a slate that is riddled with the festering wounds that mark any co-parenting relationship that has turned south.

For nearly three years after our divorce, my ex-husband and I were the model ex-couple that made people stop and wonder why we ever went through with a divorce in the first place. We enjoyed family dinners with our son and daughter (guaranteeing over 100 likes on Facebook), texted photos and talked numerous times a day to each other throughout the week, and shared in delightful disbelief over the brilliant things our children said or did that clearly marked them as Harvard-bound geniuses.

People either told us how weird we were or how progressive our modern family was, but either way, it was nice to be friends with my ex, crack jokes with him and be generally affable to the man who did, after all, father my children. Even the rabbi who conducted our religious divorce took me aside before we signed any legally-binding documents to ask me if I was positive I couldn’t make it work with my ex; we actually seemed rather fond of each other. “Trust me on this one,” I told the rabbi.

My ex and I were a terrible fit romantically, and could never figure out how to approach our marital relationship as co-equals. But we didn’t get divorced because one of us was evil or degenerate. We were simply two people who made more sense as friends, and more importantly, we were two people who always tried to put our children first.

We still want to do that – but it’s a lot harder now that our friendship has dissolved and we are no longer bound by any marital ties that, no matter how bad our marriage got, always dictated some sort of semi-peaceful resolution to any parenting dilemmas.

It’s difficult to pinpoint how this breakdown in friendship started happening. I got tired of his continuing astonishment at things like deadlines, and grew resentful of rearranging my calendar to fit his unpredictable professional schedule. He became irritated with my more passive religious direction and permissive attitude toward regulating our children’s screen time and sugar intake. A lot of it, I suspect, has to do with the fact that parenting itself, spouse or no spouse, grows harder as kids grow older. Little kids, little problems, and so on. Arguing about the right age to start solids and bedtimes is child’s play compared to fostering religious identities and determining the right age to be exposed to certain realities of life.

This rift feels like more of a loss than my actual marriage, which, even when it was terrible, and even when it ended, always had the saving grace of us doing whatever it took to present a united front before our children.

Now, the boundaries we so carefully constructed – no coded messages with our children as couriers, no discussion of any major life topic without speaking to the other parent first, and always sitting next to each other at our children’s plays and school presentations – have steadily eroded. It’s been a humbling experience.

I remember a play date my son had shortly after my divorce. He and his friend were playing nicely together, and, without thinking twice, I snapped a picture and sent it to my ex and the other boys’ parents, who also happened to be divorced. Immediately, I received an accusatory text from the other boy’s dad – “What is my son doing with you?” – and an outraged text from his mom – “How could you let my ex know I sent our son out for a play date when it’s my time with him?” – and a very fast education into the world of divorced couples who are not friends and whose every interaction is rife with resentment. I never, ever wanted to be a part of that world, but I’ve come to realize that more divorced couples look like my son’s friends’ parents than me and my ex – or how we used to look, anyway.

It would almost be easier if my ex really was evil, a sentiment I used to share often before I got divorced and was racked with guilt over ending my marriage to a fundamentally decent person. I used to wish he would cheat on me, just so I could have a tangible reason to satisfy other people’s curiosity about why we were separating and to silence my own conscience. I’d possess no qualms about waging all-out war against him if I thought his parenting approach was so precarious that it endangered our children’s wellbeing.

Alas, he is a present, attentive, and loving father, and if I disagree with some of his specific parenting choices, none of that changes the fact that he remains a great dad who only has the best interests at heart for our children.

Parenting is hard work, and parenting with a recalcitrant ex is harder. It’s two people who wholly love their children and want what’s best for them, but have wildly oppositional beliefs for how to achieve that and no sacred bounds of marriage to help align their viewpoints.

Rosh Hashana is almost here, and I want that clean slate – not only for my peace of mind, but for my children. But I can’t seem to let go of the tide of resentment against my ex-husband that has welled up inside me, especially as I review the number of sleepless nights and crying jags on the floor of my office with the door closed that have stolen too many potentially peaceful moments from me.

It’s an easy buzzword during this time of year, but forgiveness is actually a difficult concept which with to grapple. It’s simple to parrot the words – “I forgive you” – and much harder to actually grant forgiveness to someone who you feel has wronged you, a lot.

As I struggle with how to even broach a fresh start with someone who I’m sure is expecting the apology I expect in equal measure from him, I hold onto one single truth amid the resentment, hurt and anger: there is nobody in this entire world who loves my kids as much as I do except this man. That knowledge is the one anchor that moors me in the rocky sea of our current relationship and the faint guiding light that we will, eventually, find a path toward genuine forgiveness and a way back to a cautious friendship – if only so we can sit next to each other at our children’s Harvard graduations.

Tova Stulman is a communications professional and freelance writer with experience in drafting creative and development content for a variety of clients. She has contributed to the New York Times, Washington Post, Tablet Magazine and the Forward. She currently works as the Director of Communications at a private day school and lives in New Jersey with her family.