A rabbi helped me understand the stigma addiction carries. ‘Dopesick’ makes his lessons even more essential 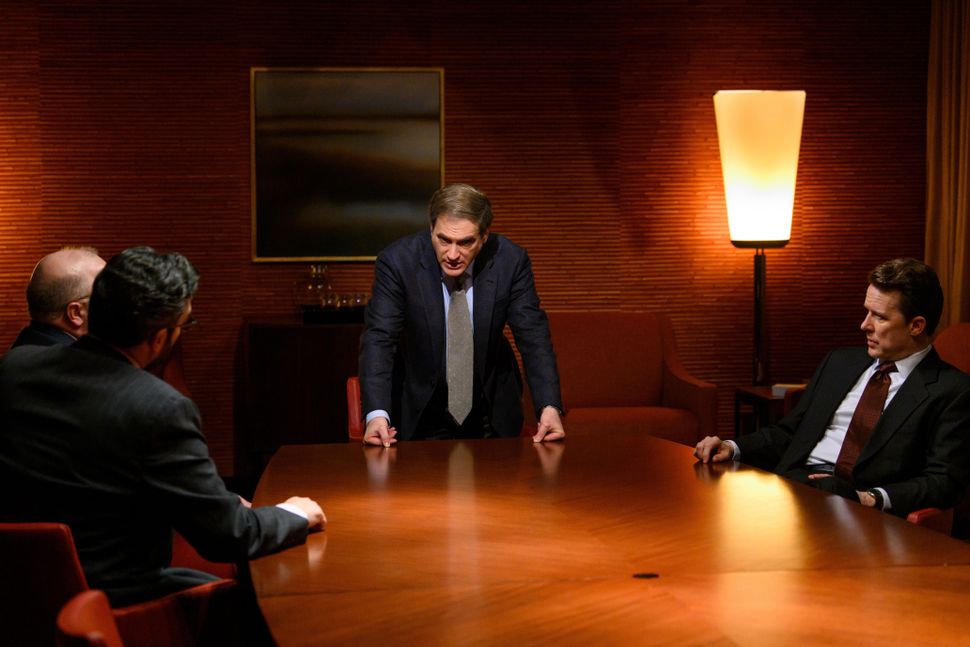 A still image from episode 6 of Hulu’s “Dopesick.” Courtesy of Hulu

Waves of agony repeatedly knocked the breath out of me, as pressure built behind my eyes, producing visual auras that blurred my sight and made me nauseous. The pain was so unique, so all-encompassing, that I lost all rational capabilities, screaming and kicking as if possessed.

My first such debilitating experience occurred when I was around 10 years old. When suffering from a migraine, I didn’t feel human anymore. Like a nightmare or a bad trip, the pain and terror only grew and lasted for hours. My sense of self was obliterated; I would have done anything to make the pain stop.

Hulu’s “Dopesick,” an eight-part miniseries about the Sackler family and their role in creating the opioid epidemic, is ostensibly about the dangers of this human impulse to stop our suffering at any cost, and the fight to hold those who took advantage of this reality accountable for having done so.

Yet the opioid epidemic was not only the result of one family’s greed, but a consequence of a society overwhelmed by, and desperate to treat, very real pain.

“Dopesick” effectively demonstrates just how poised America was for OxyContin to hit the market. After the 1940s-1970s resulted in a wave of injured veterans from WWII, the Korean and Vietnam Wars, chronic pain and disability became issues that were monetized during the government’s attempt to support injured veterans.

Reagan’s election turned the tide from one of “compassion to quantification,”; he purged nearly half a million Americans from the disability rolls. Republicans effectively replaced the subjective experience of pain with solely objective measures of disablement and limitations, forcing millions of Americans to suffer in silence, their pain deemed not severe enough for institutional support.

Purdue Pharma deftly filled the gap, with a multimillion dollar effort to brand OxyContin as an opioid “bridge…to expand the use of OxyContin beyond Cancer patients to chronic non-malignant pain,” according to former Purdue CEO Michael Friedman. Individuals that did the back-breaking work “of building this country,” as Michael Keaton’s character Dr. Finnix puts it, still sought relief, and OxyContin was there to provide it.

Coal miners are the primary example “Dopesick” uses to represent a working-class whose blood, sweat and injuries paved the way for American expansion and progress, who are now abandoned by their communities and lack a social safety net or decent health coverage. A growing number of studies show financial insecurity and the use of painkillers are indelibly linked and reinforce each other.

Anyone who suffers from chronic pain understands the frustration and desperation that pain engenders. Pain limits us, constantly “overtaking our ability,” as Richard Sackler says.

Richard Sackler (played by Michael Stuhlbarg), President of Purdue Pharma, has one answer to this first question: treat pain symptoms. “For too long, the American medical community has been ignoring chronic pain,” he thunders in the opening moments of the series.

But as the opioid epidemic makes clear, focusing only on symptoms causes more suffering.

In the series, the character of Dr. Finnix articulates an alternative path borne out of his own journey to hell and back. He begins the series as a respected community physician in Appalachia, only to be approached by a Purdue Pharma sales rep bearing OxyContin samples. In quick succession, Dr. Finnix prescribes the drug to patients who later become addicted and overdose, and becomes addicted himself, building to a whopping 400 mg-per-day habit.

He eventually loses his medical license for botching an operation while under the influence. He even gets a visit in rehab from the original, now remorseful, sales rep who got him hooked on Oxycontin in the first place. The scene ends with Dr. Finnix begging the rep for drugs.

With the help of Suboxone and therapy, Dr. Finnix gets clean. He makes amends with those in the community he harmed, driving them to methadone clinics and encouraging their recovery. He gets his medical license back. In the finale, set in 2021, Dr. Finnix speaks to a group therapy session at a new treatment facility he runs:

“Part of the reason we relapse is because [of] pain. There’s some kind of pain that’s in a lot of us that we don’t want to feel anymore. And the further we fall into addiction, pain says to us ‘Hell, I’d be better off just feeling nothing at all.’ That’s why we go numb, and our souls go numb. Now we’ve got a real problem.”

“You know pain is just pain,” he continued. “Not good, not bad, just part of being human. And sometimes good can come out of it [pain] if we’re brave enough, willing to go deeper, work our way through it, try to overcome it. We just might find our better selves.” Those who do grueling physical labor, like Kaitlyn Dever’s coal miner Betsy, should not have to “tough it out,” and accepting pain does not mean that it will vanish. However, it is worth examining why we were so susceptible to a message like Richard Sackler’s in the first place. We are taught to avoid pain at all costs — and to suffer in silence. Pain is a thing to be medicated away, privately.

What if the response to Americans in pain was one of connection and compassion? What if we did not run away from pain in all its forms, but instead had the courage, like Dr. Finnix says, to go a little deeper?

I continue to return to Rabbi Eliyahu Schusterman’s personal essay for the Forward, in which he confesses his ignorance of the opioid epidemic until an 18-year-old congregant died of an overdose. Rabbi Schusterman and his community responded to this tragedy by creating a support group within their synagogue dedicated to substance abuse counseling and began working with other interfaith groups to address the opioid crisis in their communities.

Most importantly, Rabbi Schusterman began speaking openly about substance abuse with his congregants. When he broke the social stigma of discussing the unspeakable out loud, people opened up about their own experiences, and were grateful for the opportunity to talk about substance abuse issues openly.

In addition to pain management, we must talk about addiction in our communities. We must have those uncomfortable conversations about domestic violence, affordable housing and income inequality, all factors that contribute to a rising substance abuse problem. “Removing the stigma around speaking about addiction begins with the basic recognition that addiction is a disease,” Rabbi Schusterman wrote, “and a human response to something we’ve all experienced.”

“Dopesick” showed the world the Sackler family’s villainy. More people are likely aware of the Sackler name than before “Dopesick,” and I hope that the remaining institutions who bear its name, like the Sackler School of Medicine in Tel Aviv, are inspired to remove it.

But what if, instead of centering the Sacklers and focusing on the battle to take them down, we instead centered the victims of the crisis and focused on trying to raise them up? In a country where health care is seen as a privilege and not a right, where union membership is less than half the rate of what it was in 1983 and mental health is still stigmatized (and largely uncovered by health insurance), a massive opioid epidemic feels inevitable. When we do not provide support for our citizens from birth, a powerful opioid is poised to replace a more measured and holistic approach to health and pain. It is far easier to treat our nations’ long-festering inequalities with an 80 mg OxyContin pill than it is to right systemic ills.

The real question “Dopesick” poses is, whose approach to pain and suffering will we choose? Will we continue to fall prey to the new markets of addiction pharmaceutical companies create, trying the next OxyContin as a solution? Or will we decide to dig a little deeper, and connect?

What if we were truly present with our own suffering, and allowed it to teach us something about what we truly need from our society, our neighbors and our elected representatives? What if we focused on speaking honestly about addiction to remove its stigma, and get to its root causes? As Dr. Finnix eloquently put it, “Addiction does the exact opposite of what connection does. It tears apart.”

“Dopesick” may not have intended to pose these questions, but I hope that everyone else is listening.

A rabbi helped me understand the stigma addiction carries. ‘Dopesick’ makes his lessons even more essential