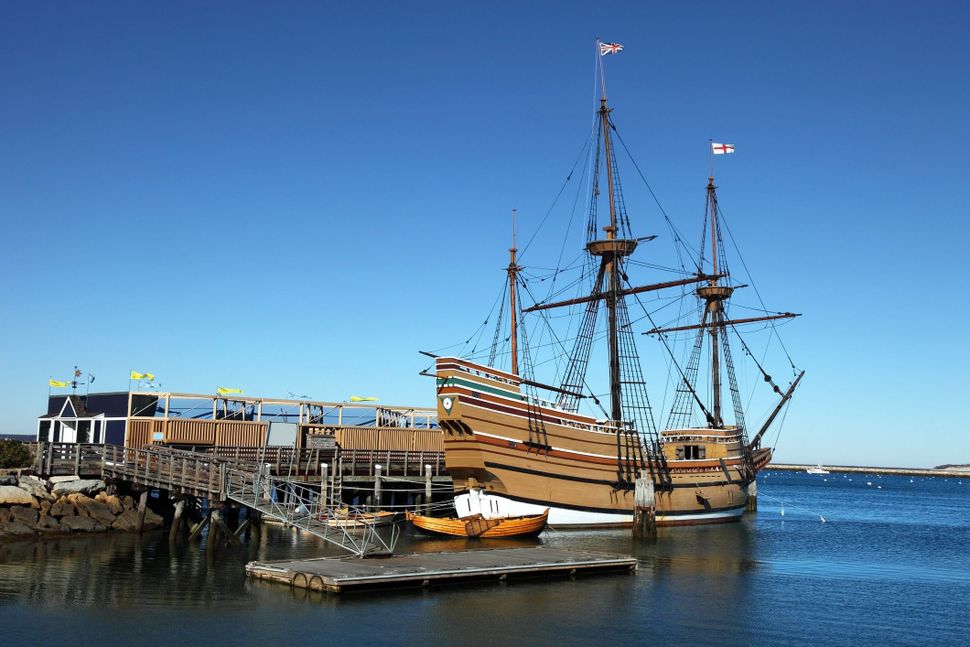 The Mayflower II, a replica ship of the vessel that brought the Pilgrims to America, is docked at Plymouth Harbor in Massachusetts. Earlier in his career, Forward Editor-at-Large Robin Washington was ejected from the boat for asking tourists and staff member actors too many pointed questions about the settlers attitudes toward Native people. By Denis Tangney, Jr./iStock

In a memorable moment of my journalistic career, I was thrown off the Mayflower II.

More precisely, I was led off — as opposed to being forced to walk the plank — the replica ship in Plymouth Harbor by one of its crew member actors, who overheard me asking tourists about atrocities the Pilgrims committed against Native people.

“I don’t think you ought to be asking questions like that,” the crew member said in her best 17th century English accent.

“Are we breaking character?” I asked her.

My assignment was for National Native News, a daily public radio newscast for which I filed a report each year about Thanksgiving — or the National Day of Mourning — from Plymouth Rock and the nearby Plimoth Plantation living history park and replica ship.

I had some skin in the game. Like countless Black families, mine included oral histories of Native ancestry. The name “Washington” supposedly was derived either from a similar-sounding Cherokee word or the descriptor for “washing town” — i.e., laundromat. Though recent DNA tests don’t stand up my elders’ claims, some of their stories were told by their elders — meaning the ancestors they spoke of 150 years ago were grandparents that people in my lifetime knew personally. Why would they make it up?

That’s not to say that I identified as Indigenous, but it was one ingredient of my Black and Jewish upbringing in Chicago in a home where a tableau of ethnicities would meet to plan protests and marches in the Civil Rights Movement.

And it was something I explored deeper when I arrived in Boston for a fellowship in the late 1980s. In a Harvard library, I happened upon a series of monographs titled “Biographies and Legends of the New England Indians.” Published before the term “politically correct” existed, I can’t tell you where it lies on that scale. But I vividly recall being shocked by its matter-of-factly recounting of violence and massacres, in many of the places I walked past daily.

Most jarring was a “truce mission” led by Miles Standish. At what was supposed to have been a meal to discuss their differences, he attacked and killed the Native members of the parley, returning with the head of one of them, Wituwamat, to plant on a pike at Plymouth for several months.

The time period of that display coincided with the dates that the recreated Plimoth Plantation was supposed to represent. So after I was led off the boat and into the office of the plantation executive director (now that’s a helluva title), I asked where was Wituwamat’s head?

“Well, yeah,” I recall him responding. “How accurate should you be? We don’t want to scare people.”

Maybe not, but isn’t the point of historical re-enactments to educate them?

To their credit, some of the other actors I encountered earlier had made it their point to educate people. One explained that putting heads on pikes was perfectly civilized, and commonly seen on London Bridge in the 1600s. Another went on — off-script, I’m sure, but accurately portraying his character’s mindset — to thank the Lord for sending a plague to rid the land of Native people, hopefully once and for all.

That dropped the jaw of a tourist overhearing us. I asked her: “Now what do you think?”

“I’m just a house frau from way back,” for whom Thanksgiving was all kitchen and family, she said slowly. “But now, I don’t know.”

I haven’t been back to the plantation since (again, a whacked statement if there ever was one) or to its museum boat, but they have left the 17th century in some ways. For starters, they’ve taken “plantation” out of their title, and there are Wampanoag members on their board.

But those unfiltered Pilgrim stories from back then certainly ruined my appetite, and for several years, I was a wet blanket at anyone’s Thanksgiving.

I’ve since learned to follow what has become the new American protocol for get-togethers: Keep your opinions to yourself, except to remark how good the low-sugar cranberry sauce is. It helps that those with whom I most often share my leisure time disagree little about the horrors of history, as well as the uplifting tales of honor and human dignity. We also share the commitment of learning from that past to repair this world.

Because in that regard, we’re all in the same boat. And no one can throw you off.