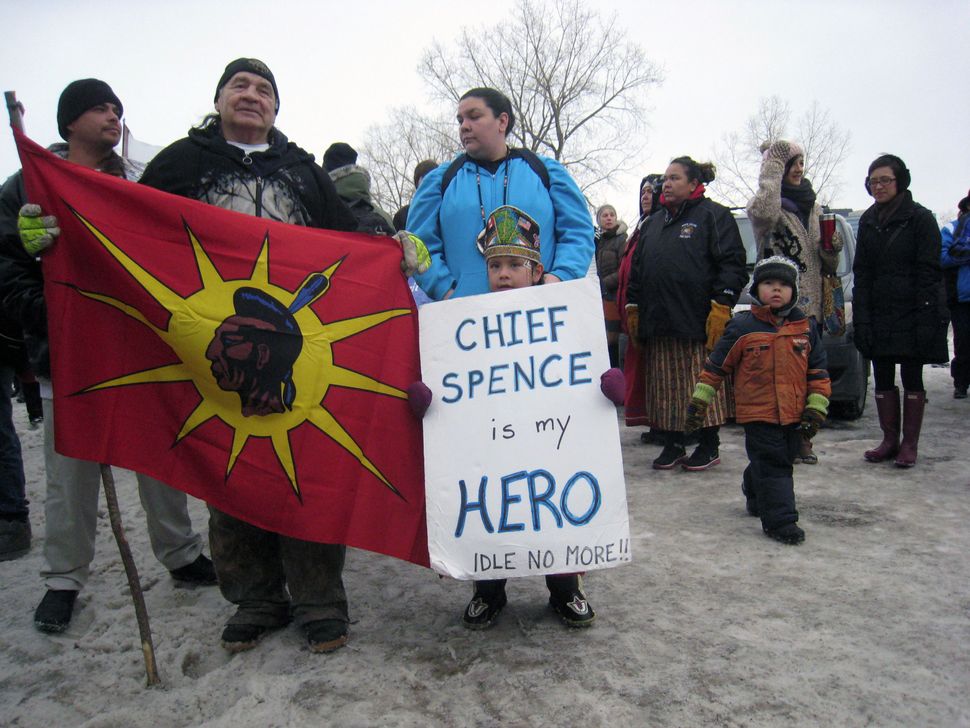 A young native girl and a native elder gather on Victoria island for a march on Canada’s parliament in support of Attawapiskat Chief Theresa Spence’s strike on January 11, 2013. Image by AFP / Getty Images Stringer

This piece is the first in a series of reflections on mass violence from members of Sixth & I synagogue in Washington, DC.

The word “surprised” has been thrown around quite often as of late. You’ve heard it in conversations about race and the miserable violence that’s colored red this moment of our collective American life. I admit, I’ve used the word myself. And in an essential way these abhorrent acts of malice should be surprising, as all acts that seek to damn the value inherent to us all should be. But, I say as well that it is misguided to be surprised by the violence that’s defined this present moment. We have used, I include myself in this, the nature of our startlement as a means to concede the responsibility of engaging with and understanding the uncomfortable, the difficult truths that define our American reality at present. It’s easier to be shocked than to wrestle ugly shadows. The following is how I’m trying to release my surprise, to wrestle those shadows, and to invite you to do the same. Those shadows scare me and they change the way I see myself and others, maybe that’s what’s different now for me after what’s happened.

My family is mixed race. My father is from Italy and is as white as the driven snow, and my mother is American Indian of the Cherokee and Otoe-Missouria Tribes and to me looks like what I envision the narrator looks like in Silko’s “Ceremony,” she does not paint with all the colors of the wind, she’s a cancer researcher. All my life I’ve had to be the captain of a ship, a navigator charged with calculating a path between two cultures that have very little to say to one another. I was either deemed too dark to be from a village just south of Florence by my family in Tuscany, my eyes an unfamiliar almond shape that raised questions, or my way of speaking and style of dress was immediately identified as not part of the community when traveling to the reservation. I’m also Jewish, so that’s a lovely dusting of sugar on the fry-bread babka of confusion that I eat when I get into these conversations. My kippah is beaded, so naturally the term “apple” is a constant with my Native family (red on the outside, white on the inside).

On a day to day basis in this country I have to choose what side of my identity I’ll share with people, and I can tell you in almost all cases I choose the whiter of the two options. The former is something that grieves me deeply, but in most instances I find it a decision that simplifies interactions and many times keeps me safe. When I say I’m Italian people’s perception of color becomes distorted, my dark copper skin suddenly turns olive to them, my high cheek bones become mediterranean, and the line of my nose Roman. This is all to say that these features bare no objective reality, their interpretation resting in some liminal subjective fantasy of a generally woefully biased beholder. Defining my race is a constant source of entertainment for white people, Lebanese? Azerbaijani? Israeli? Indian? (Rogan Josh not Fry-Bread) Mexican?… you’re totally Mexican, verdad? When “Native American” comes up the questions range from “What’s your spirit animal?” to “WHY DON’T YOU PAY YOUR F—-ING TAXES?” (Native Americans pay federal and state taxes, excluding taxes on income made from trust lands).

Saying you’re Indian can be dangerous. I learned this when I was 18, an age when so many men “of color” seem to pass through this lesson. I took a job on a ranch in Southern Utah. I remember walking into the main house on the property and seeing the severed heads of prize deer and bison on the walls, in the center of the collection was a clay bust of a severed human head, an Indian head with bandana and stoic eyes. I ran back to my bunk room, I remember shaking and feeling sick. I immediately hid the tobacco pouch that my Mother blessed that I took with me and the beaded belt she gave me.

I remember feeling stupid and thinking that I should have expected that, now I’m asking you why I should have to expect this? I refuse to give into the narrative of surprise that’s wound its way through ink and voice in the past months, it is a veiled bandage that serves the purpose of presenting us an option that we can all buy into, that something is fundamentally different now than what has been in the past. We are shocked, we are unnerved, and in this reaction we find comfort of a sort in the detachment it gives us from the responsibility of prior knowledge, contributing factors, a present reality, “I’m shocked because I didn’t know the depths of discontent, of hatred, of violence in this country…”. The former is something I’m not going to say anymore, I don’t think any American should say it anymore, especially American’s from my generation, the millennial generation, we sadly have to know better now.

In April there were stories pouring out of Canada and Alaska describing the absolute horror First Nations and Alaska Native communities were facing in the epidemic numbers of suicides occurring in Indian Country. On a single Saturday in a town with a population of 2000 called Attawapiskat in upper Ontario, 11 people of First Nation origin attempted suicide, there have been more than 100 suicide attempts there this year alone. Coverage of these events was limited to a few days in American and Canadian media. Internalized violence along with imposed and community directed violence is something that goes hand-in-glove in Indian Country, suicide is the second leading cause of death in Indians 10-24 yrs. of age with this demographic having the highest suicide rate of any population in the U.S. according to the Aspen Institute. Violence as defined generally Including traumatic injury, homicide and suicide account for over 75 % of deaths in this demographic, again the highest in any demographic in the country. I’m not a utopian or naïve enough to raise the signal fire in yelling “hey, there’s suffering in underserved populations in this country!!”. But what I do think is that we must ask ourselves why we are surprised by the desperation, the degenerate nature of violence and hatred we’ve witnessed in what’s occurred in the past few months? These realities have been present on the periphery of our society for a long time, and I say it’s time that we acknowledge that we don’t get to say we’re surprised anymore…we lost that privilege a long time ago.

Enrico Nassi is a director, playwright and actor based out of San Diego, California. He holds a Masters in Western Classics from St. John’s College, Annapolis and is currently finishing a Master of Fine Art at UCSD. Enrico is enrolled in the Otoe-Missouria Tribe and a member of the Cherokee Nation.