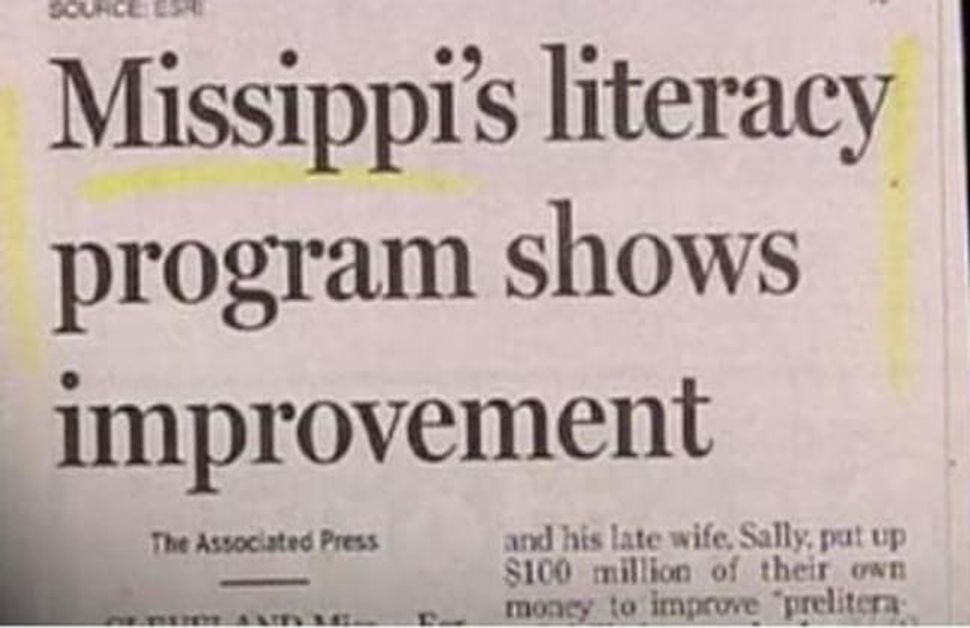 I was absolutely mortified two weeks ago when this column published with a typo in the subject line. It was a classic, perennial one, making great questions a core “principal” (head of a school) instead of “principle” (tenet) of journalism (and Judaism). Which several of you promptly and mostly politely pointed out: “One of the core PRINCIPLES in journalism is correct grammar and proofreading,” a reader named Mark Sydney wrote in an email.

OK, mistakes happen. I included a correction in last week’s edition. Only to discover, moments after it blasted out, a more egregious mistake in that column, which was about the Black-Jewish civil rights alliance.

I referred to the three young activists lynched in Mississippi in June 1964 as “Andrew Goodman, Michael Schwerner and James Goodman,” when of course the surname of James, the Black Mississippian killed alongside two Jews from New York, was Chaney. What was going on here?

“Goodman, Schwerner and Chaney” is a trio as familiar to me as red, white and blue; I wrote my Yale senior essay about the voter-registration campaigns they were working on. Seeing the name “Goodman” twice among the three should have set off alarm bells for the two people who help me edit, proof and produce this column.

Yet there it was, in black and white and blasted to more than 115,000 inboxes, making me look stupid or lazy or worse.

Turns out it’s not me. It’s my brain. All of our brains. Because they are sophisticated, complicated machines and not, you know, computers, scientists have found in numerous studies that typos are an inevitable part of, well, typing. A 2014 article in Wired magazine explained that our brains use a strategy called “generalization” to sort thoughts and information into groups, which allows us to express complex ideas but often makes us miss small details. And catching our own mistakes is hardest because we’re most familiar with what we were trying to say.

Technology can help, flagging misspelled words or even grammatical errors. But it also can hurt — hello, autocorrect.

“The more words you know, the faster you type, the more opportunities you have for different words to interfere with each other,” she added. “Everybody does it. Some of them end up being hilarious and deeply embarrassing, and others are just, oh, oops.”

Perhaps my favorite personal typo of all time came not in decades of published journalism but, of all things, on the yarmulkes for my wedding.

I had ordered them, as I had planned most of the blessed event, while covering the 2004 presidential campaign, and they arrived saying “Demember 5” (the Hebrew date, 22 Kislev, was correct).

We laughed, embraced it as another way we made the celebration uniquely ours and, 16 years later, purposely put “Nomember 21” on the kippot for our twins’ bnei mitzvah. 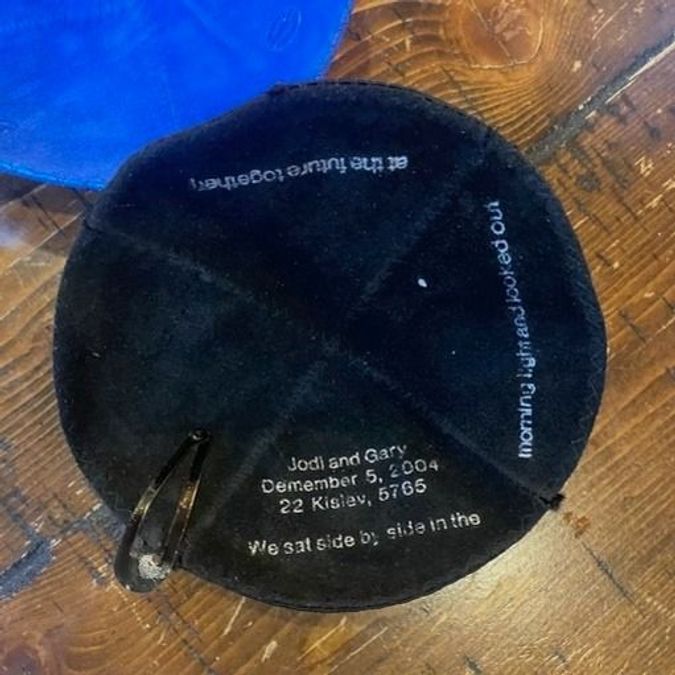 Another totem to typos sits in my mug collection, immortalizing an epic correction on this 2016 New York Times story I edited about the Indian farming village that was the birthplace of Sri Srinivasan, a federal judge then thought to be a top contender for nomination to the U.S. Supreme Court.

The village is called Mela Thiruvenkatanathapuram, and we got it right five of the six times we mentioned it but somehow — those brains again — left out the “ta” between the “ka” and “na” once.

“This correction, it should be noted, has been carefully proofread,” the copy editor added to the usual boilerplate. The author of the original article, an old friend and a brilliant journalist, had the mugs made in what she described as “a classic meeting of humor and despair.”

Alas, I am anything but alone. The internet abounds with roundups of mistakes hilarious, embarrassing — and expensive.

As shown in the photo above, there was a Bible printer in London way back in 1631 who left out a crucial “not” in the Ten Commandments (and was fined 3,000 pounds). Centuries later, the publication of a Koran missing a verse triggered the dissolution of the Kuwaiti government.

In 2013, Mental Floss listed 10 of the most expensive typos in history, including a missing hyphen in a 1962 NASA manual that apparently caused a spacecraft to crash; a 2013 Macy’s mailer that discounted a $1,500 necklace to $47 instead of $497 (it quickly sold out); and an extra letter in a New York City Department of Education document that led to an accounting-software error that cost (taxpayers) $500,000.

And, apparently, the Shakespeare character “Imogen” was originally “Innogen,” but a printer got confused by the double-n, so countless women throughout history have essentially had a typo in their own names. (Which particularly resonates for me, since I am constantly getting emails addressed to “Jody.”)

Oh, and then there was this unfortunate 2010 headline on an Associated Press article: “Missippi’s literacy program shows improvement.” 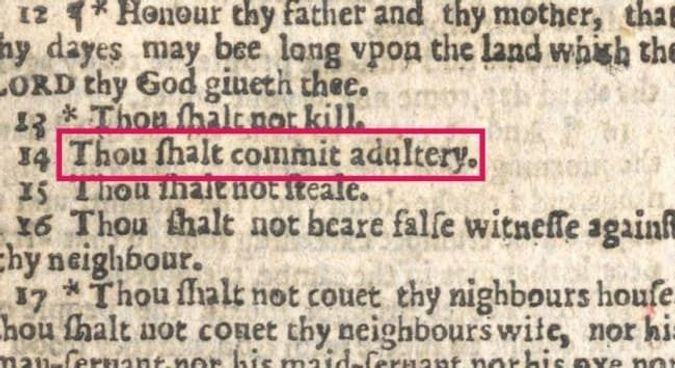 In 1631, a London printer mistakenly left the word “not” out of one of the Ten Commandments. Courtesy of bookbub

Which brings us back to my error on the horrible Mississippi murders of Goodman, Schwerner and Chaney. Which probably was an innocent typographical misstep but some readers suggested might reflect something deeper. Was I, a white Jew, over-focusing on the white Jewish protagonists in this tragedy and erasing the Black one?

Professor MacDonald thought not, though she noted that we can never really know the origin of such missteps, and they “need not have one origin.” Accidentally repeating the surname “Goodman” fits neatly into her explanation of how the brain can get interference from thinking too far ahead — or get stuck in place.

“Once you say something or type something, it should be swept out of your memory so that you could move on to the next word,” MacDonald said, “but sometimes that doesn’t happen perfectly, so you end up typing the word twice.”

I asked Maryellen MacDonald — whose parents blessed her with not one but two names prone to typos — about the worst one she had ever made. It was in a grant application to the National Science Foundation to study how we talk, and it was a subject-verb agreement problem — in the very first sentence. (She got the grant anyway.)

I also asked her what we can do to prevent typos — or, at least, catch more of them before hitting that “send” button. It’s a daily struggle for us here at the Forward: as a reader-supported nonprofit with an operating deficit, we have been working without a copy editor since I arrived (though we plan to hire one next year).

We use a Slack channel called #proofme to call on colleagues to back-read everything, but I still find typos in nearly every article I open and spend hours every week fixing them.

Unfortunately, she could offer no quick-fix. “Time is the enemy, especially for journalists working on a deadline, you’re writing quickly,” MacDonald noted.

“Proofreading yourself is not so effective, because you knew what you were trying to say — if you put it away for two weeks and then came back to look at it fresh, you’d do a much better job,” she said. “If you send it to someone else who had no idea what you were writing about, they’ll do a better job, but all of that takes time. If you’re particularly worried about typos, you have to budget in more time.”

And so I’ll end here, and send this off to be proofread, knowing we’ll never catch all our mistakes.

Rabbi Sy Dresner, told he was dying, drew up a bucket list that included a final visit to Katz’s Deli. His son, Avi, wrote a powerful personal essay about it.

This week we’ve also got articles about the cause of the cream cheese shortage and the Jewish gang that almost starred in the original “West Side Story,” plus OpEds about what we all got wrong about Trump and Israel and a preschool that welcomed Santa but exiled a Jewish girl uncomfortable sitting on his lap.