What I learned watching a documentary about the shared — and shattered? — Black-Jewish alliance This is an adaptation of Looking Forward, a weekly email from our editor-in-chief sent on Friday afternoons. Sign up here to get the Forward’s free newsletters delivered to your inbox. Click here for your free weekly printable magazine of top stories.

Rabbi Allen Secher recalls it starting, like so many a Jewish gathering, with a round of jokes. He also recalls that his fell flatter-than-flat.

“I don’t know if you can quote me on this, I don’t know if it’s proper,” Secher, now 86, said when we spoke last night. “It’s the old joke about a fellow who auditions for a job in radio, and he comes home from the audition, and he’s asked, how did you do?” There follows a cringeworthy rendition of the fellow stuttering through “I didn’t get the job” and then, when asked why, stammering “an-an-an-an-an-antisemites.”

“It’s an old joke, it was dumb, and it was an embarrassment for me,” Secher said. “I apologized later.”

The gathering in question was not some Borscht Belt reunion. Secher was one of 16 Reform rabbis stuck in jail on June 18, 1964, in St. Augustine, Florida, where they had gone at the request of the Rev. Martin Luther King Jr. 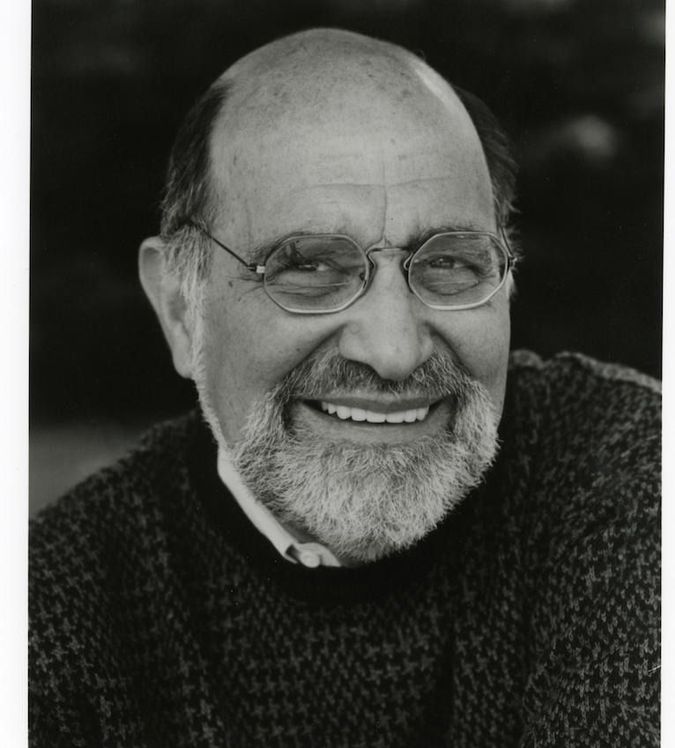 Trailblazing Rabbi: Allen Secher was one of 16 Reform rabbis stuck in jail on June 18, 1964, in St. Augustine, Florida, where they had gone at the request of the Rev. Martin Luther King Jr. Courtesy of Allen Secher

After about a half hour of jokes, he says, the group got serious about its serious situation and, inspired by King’s “Letter from Birmingham Jail,” used a pencil stub to scratch some notes about why they’d made this pilgrimage to stand against segregation in America’s oldest city.

“We have been vocal in our exhortation of others but the idleness of our hands too often revealed an inner silence; silence at a time when silence has become the unpardonable sin of our time. We came in the hope that the God of all of us would accept our small involvement as partial atonement for the many things we wish we had done before and often.

“We came as Jews who remember the millions of faceless people who stood quietly, watching the smoke rise from Hitler’s crematoria,” it continues. “We came because we know that, second only to silence, the greatest danger to man is loss of faith in man’s capacity to act.” Warren Clark, a St. Augustine artist, made this painting in 2014 for the 50th anniversary of the rabbis’ arrest.

I was reminded of this Letter from St. Augustine by “Shared Legacies,” a 2020 documentary about the Black-Jewish civil-rights alliance that I screened at an event this week. 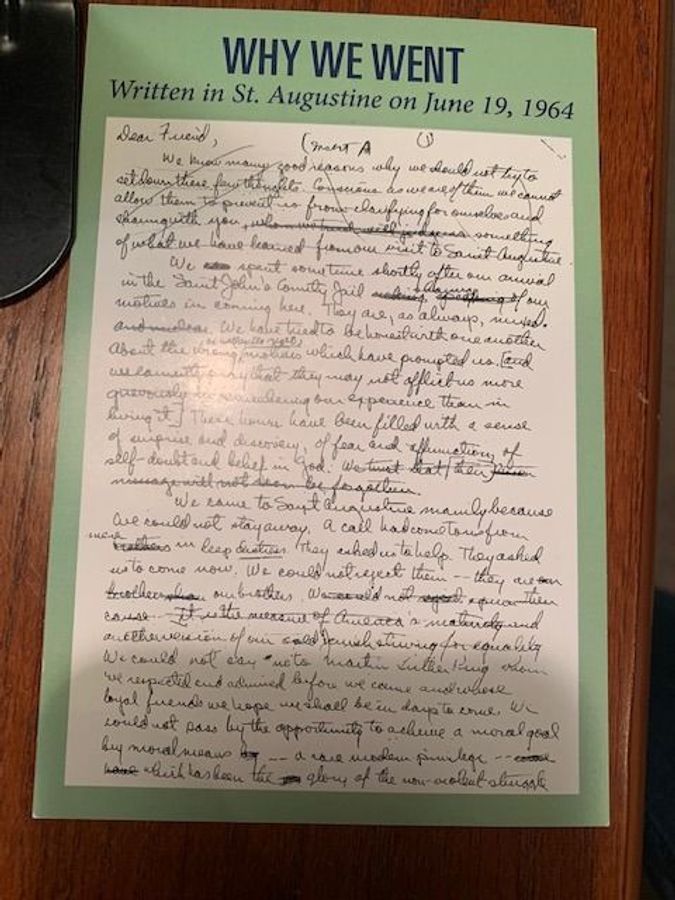 Why They Went: The letter written in St. Augustine in June 1964. Courtesy of Allen Secher

The film, written and directed by Shari Rogers, a psychologist and social activist out of Detroit, is bursting with incredible interviews and fascinating footage about an era that seems starkly distant amid the divisions of today.

The core narrative is, to me, deeply familiar; my focus in college was African-American history, my senior thesis an oral history of largely Jewish Yale volunteers in a 1963 civil rights campaign in Mississippi. But the documentary goes far beyond Abraham Joshua Heschel walking with King across that bridge in Selma and Andrew Goodman and Mickey Schwerner being lynched alongside James Chaney, surfacing many anecdotes, ideas and images that I’d either never learned or long forgotten.

Like the fact that Dr. King spoke about Soviet Jewry long before many Jews were involved in that struggle. “While Jews in Russia may not be physically murdered as they were in Nazi Germany, they are facing every day a kind of spiritual and cultural genocide,” he said. “Negroes can well understand and sympathize with this problem.”

And that rabbis were later asked to bring extra yarmulkes to some Southern marches because young Black men were embracing them as “freedom caps.”

The film tells the story of Kivie Kaplan, the Jewish businessman-philanthropist who was president of the NAACP, being inspired to civil-rights work by a vacation in Florida where he saw signs barring Jews and dogs from country clubs. It explains the resonance of the Exodus story for Black protesters and the connections both Jewish and Black leaders felt between Nazi Germany and Jim Crow.

It also traces the troubling arc of what Rogers calls in a chapter heading “The Alliance Shattered,” from before the Crown Heights riots through the 2014 protests of Ferguson, Missouri. It features Rabbi Susan Talve being told, amid the anti-Israel stance of the early Black Lives Matter movement, that she could not speak at those Ferguson protests — and, importantly, the Rev. Traci D. Blackmon, a BLM leader, who responded: “If Susan doesn’t speak, I don’t speak.”

I found myself thinking about how much had changed from the 1960s and before, when both liberal white Jews and Black activists intrinsically understood themselves as natural allies. The Holocaust is of course much less present for current generations; so, too, the time when white Jews were barred from full participation and power in American institutions.

The seeming endlessness of the Israeli occupation has made the Palestinian cause much more urgent for those who battle discrimination. And the class divide between white Jews and Black Americans that was already significant in the 1960s has become a gulf.

Prof. Bruce Haynes, a sociologist at the University of California and part of the discussion I moderated after the film, pointed also to the dwindling number of Jews in the labor movement, where they struggled alongside Blacks for decades. And to the increasing secularization of our society, noting that the 1960s bonds were very much rooted in religious leaders like the rabbis arrested in St. Augustine. (You can watch video of that discussion here.)

“Today, we have movements that are much more fractured, that are much more on the internet,” Haynes said. “And so Jews and Blacks are no longer in the same physical locations as they were once in the 60s. And so the conversations that we used to have, I think organically, no longer exist. A still from St. Augustine in “Shared Legacies.”

“So I believe if we want to create them, particularly in the context of ongoing segregation, we have to create an infrastructure that will allow the bridging of these communities in a much more fruitful way, and it must go beyond conversation towards action. Because I think that’s where our young people are focused these days.”

Rabbi Secher is one of three surviving rabbis from the St. Augustine 16. He’s had a most colorful and varied life and career, serving in pulpits from Mexico to Montana, hosting a radio show heard on 450 stations for three decades, consulting on the TV sitcom “Bridget Loves Bernie” and always keeping a hand in human-rights work.

Secher has lived since 2000 in Whitefish, Montana — “what the Garden of Eden was supposed to be,” is how he describes the place — and in 2016 was one of several Jews in the town targeted by their notorious white-nationalist neighbor, Richard B. Spencer.

But the St. Augustine experience stands out, Secher said, as “one of the great prides of my life.” A print of the 2014 painting depicted above in this newsletter hangs in his home (“He used his imagination,” Secher said of the artist. “Can you picture a large group of rabbis having their shirts off, even in jail?”).

The manifesto itself is Secher’s computer screen-saver. Over the last couple of years, he has done about 10 Zoom talks for synagogues around the country, always reading excerpts from those words he helped write with that pencil stub.

“To my recollection, there was just one piece of paper, the back of a Klan poster,” he told me. “As we went through each of the statements, everyone would comment.” On the original, he added, “You can see that there’s stuff marked out or changed. Every one of us had a chance to edit.”

In all these years since, whenever “there was something in the civil rights arena,” Secher said, he turned back to the Letter from St. Augustine for strength. “It is a powerful letter,” he added. “It really says where Jews should be.”

This column doesn’t usually have homework, but now’s a good time to give that letter a read.

Yes, there is a cream-cheese shortage at New York bagelries. Our staff’s recommendations for alternate toppings is one of the gems in this week’s free, printable magazine.

You’ll also find Arno Rosenfeld’s explanation of “Zionophobia,” PJ Grisar’s reporting on a controversial Israeli documentary, an OpEd calling for broader protest of China’s Olympics on behalf of the Uyghurs, a moving personal essay about finding bravery at a JCC, and the secret Jewish history of Tom Waits (hint: it involves Bob Dylan).

Our Adam Langer will talk to the legendary Oscar-nominated mastermind of “The Seven-Percent Solution,” “Time After Time,” and three classic “Star Trek” films about his career, the Protocols of the Elders of Zion and his latest novel, “The Return of the Pharaoh,” which follows Sherlock Holmes on a death-defying Egyptian adventure.

Register for this free event here.

I’ll be chatting with our news director, Benyamin Cohen, about the miracle that is his making of our new morning newsletter, and his lifelong obsession with curating the stories of the day to share with friends, family and now, you all. This is an exclusive event for our donors, — so if you want to attend, click here to make a contribution and we’ll email the registration link.

News from the Newsroom

Introducing “Letter from California,” a new weekly newsletter from our L.A.-based national editor, Rob Eshman. Each week Rob will deliver Jewish stories through a California lens and a Jewish perspective on California news. Click here to read the inaugural edition, here to get the next one delivered to your inbox.

Our brilliant CEO and publisher, Rachel Fishman Feddersen, is one of 24 fellows in the next cohort of the Sulzberger Executive Leadership Program at Columbia Journalism School. Her project is developing a sustainable business model aligned with the Forward’s public-service mission and make our work more accessible to all.

What I learned watching a documentary about the shared — and shattered? — Black-Jewish alliance