No cream cheese? No problem. A dozen alternate bagel toppings. 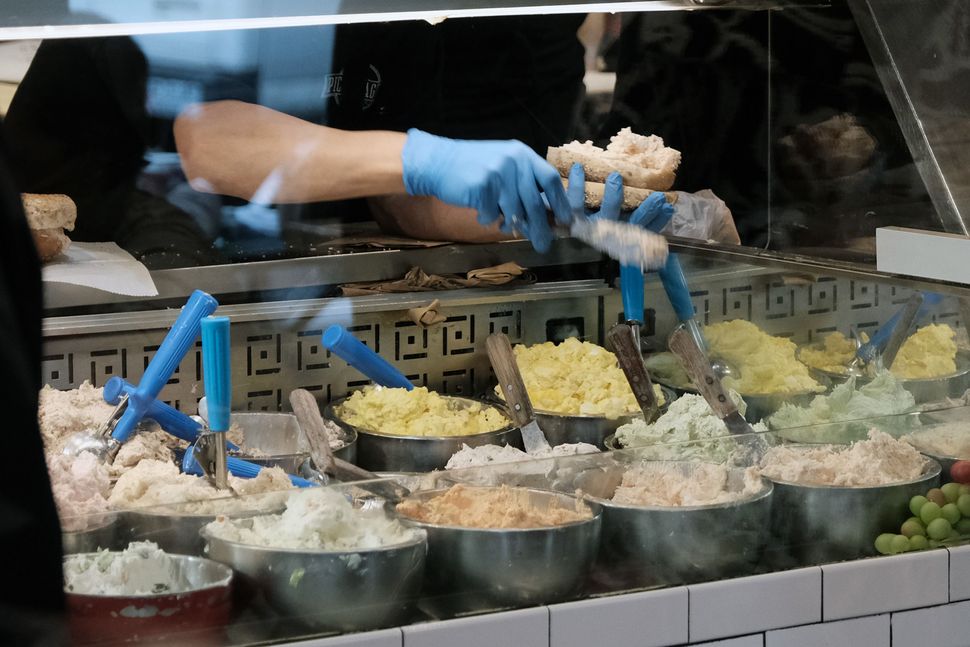 A bagel shop counter, during a time of cream cheese shortages in New York City. Photo by Getty/Spencer Platt/Staff

We’re sure you’ve heard by now. First it was toilet paper. Then coins. At last, the supply chain’s woes have hit us squarely in the Jewish soul: there’s a cream cheese shortage in New York.

While various reports have it that some bagel places are still schmearing enough Philadelphia to top a sugar cone, many bagel purveyors are feeling the squeeze.

The good news is, bagels are really tasty — and not just with cream cheese. And we can help our local bagel shops by stopping by and ordering one of their finest doughy Os with something else or whipping up some alternate toppings ourselves.

Here’s what the Forward staff puts on bagels when the usual schmear is in short supply.

1) Avaco-do try this one for a healthier bagel

I basically went on bagel hiatus when I started doing Weight Watchers in 2011, but then discovered the incredible WW-approved two-ingredient bagel, which I have made in both oven and air fryer to great satisfaction. Amid a general pandemic backslide on healthy eating, I have returned to occasional real-bagel indulgence, generally opting for flagels whenever available to at least cut down the carbs (or scooping out full-size bagels). Out of a probably-misguided sense that avocados are slightly less-bad-for-you than cream cheese — and a reasonable one that they are tastier — I have taken to smashing the ripe green fruit onto the bagel, topping it with everything seasoning and, whenever possible, smoked salmon and sliced red onion.

If I can’t have cream cheese, give me whitefish salad. Every year, it’s my go-to “second bagel” at the Yom Kippur break-fast. After I wolf down the traditional bagel and shmear and go back for round two, I take this slightly more distinctive option. It’s always the same: whitefish salad, tomato, and a slice of Swiss (never Muenster!). Bliss.

3) Chicken salad and a bit of Korean flair

I recently moved from a bagel desert to a flowering poppy and onion oasis called Astoria, where holey manna lives peaceably alongside souvlaki trucks. Oftentimes I forgo the typical schmear. Brooklyn Bagel & Coffee Company, which, bizarrely, has three locations in Queens, two in Manhattan and exactly none in Brooklyn, boasts a variety of on-menu sandwiches decked out with foodie favorites like hot honey and chorizo. But because they make an honest-to-goodness, crispy, chewy kettle-boiled beauty of a bagel, it’s best to keep things simple and let the carbs shine through. I recommend their chicken salad — and really, any chicken salad on a good bagel, especially if it has some apples and grapes.

My second pick is unconventional — and treyf — but oh so good. Between the Bagel on 30th Ave slings up a Seoul meets Bagel or “SMB” sandwich with bulgogi beef and egg with cheese, kimchi and gochujang. The owner, Ben, always gives sour straws with your order — and occasionally samples of homemade pudding.

Bagel Shop on 93rd Street and Third Ave serves up one of my favorite sandwiches ever: spicy chorizo with avocado and pepper jack cheese. Best served on an everything bagel and gobbled on the sidewalk, because who wants to wait until you get home?

As someone who has been lactose intolerant for nearly a decade, I’m thrilled tofu schmear is getting its time to shine. It does have a bit of an unpleasant aftertaste, so you really have to use toppings strategically. I alternate between vegetable or scallion schmear and add tomato and red onion — definitely also get lox if you eat fish. Another decent option is whatever hummus and random veggie sandwich your local bagel spot offers. Now that I write this out, I think us dairy-free people need better options. Philadelphia, once you sort out the supply chain issues, maybe try innovating on the plant-based front?

6) Homemade, with a dash of Cynthia Nixon

I confess that I am married to a fantastic bread maker, who several years ago expanded his repertoire to include homemade bagels. (In a pinch we’ll buy bagels from Costco. We’re only human). We’ve even gone so far as to transport several gallons of New York City tap water to friends in Chicago so that he could make them authentic New York bagels. My favorite topping at home is a schmear of butter, a fried egg and plenty of Frank’s Hot Sauce.

If my in-home baker is too tired and I must indulge, I head over to Murray’s Bagels in Greenwich Village to have what I call the Cynthia Nixon: toasted cinnamon raisin bagel, lox, (cream cheese), onions and capers, plus a cup of their fresh-squeezed orange juice. Cynthia may have lost the governorship due to this controversial order, but as a sweet-and-salty devotee I can’t get enough. For a modified Cynthia Nixon, sans cream cheese, sub out whitefish spread for both the lox and cream cheese OR keep lox and sub in tofu cream cheese.

As a born-and-raised New Yorker, I can always rely on the corner deli or bodega cooking up the classic bacon, egg and cheese (on whatever bagel choices are available).

8) Lose the schmear, take the avocado (or shoot the bries)

When I worked at a café in Somerville, Mass., during graduate school, I got quickly bored of the basic bagel and schmear for my lunch-break meals — make enough of something for other people and it starts to look unappealing. So I had to get creative; one of my favorite combos during this period was a bagel with avocado, lox and pickled red onion. If I was feeling luxurious, I’d swap out the avocado with a few slices of brie and maybe a drizzle of balsamic.

I’m a member of the school of Jewish cooking that believes in making the same dishes for every Jewish holiday. It’s brisket and kugel for Purim, Passover, Rosh Hashanah and — most recently — Hanukkah. A good thing too because my brisket recipe, which calls for braising five pounds of meat, led to a bagel-spread epiphany. The heads of garlic that I cracked open and left in the pot for three hours came out beautifully caramelized and, if you haven’t seen where this is going yet, delightfully spreadable. It may not replace cream cheese for the classic bagel sandwich, but try it for a quick snack and you’ll never look back.

Living on the Upper West Side, there is no shortage of great old-school bagel places. If I had to go cream cheese-less, my go-to would be a kosher salami and egg sandwich from **Tal Bagels**, or chopped liver from Murray’s Sturgeon Shop lightly spread on a toasted bagel.

My favorite bagels in Los Angeles are at the Bagel Broker, a family-owned place near the Grove. A Los Angeles classic worth the line around the block at any time between 8 a.m. and noon, most days. I go for the Jalapeño cheddar bagel with egg and lox, and (usually) cream cheese and a simple coffee to enjoy down the street at Pan Pacific Park, the site of old Gilmore field, which predates Dodger Stadium.

My favorite bagel is a fresh, crispy sesame bagel with egg salad/mayo and tomato — to a point that every bite is a challenge to keep my shirt and pants from getting the remainder. Though I have cut down on bagels in recent years due to a strict low-calorie diet.

No cream cheese? No problem. A dozen alternate bagel toppings.