Our preschool welcomed Santa — and exiled my Jewish daughter 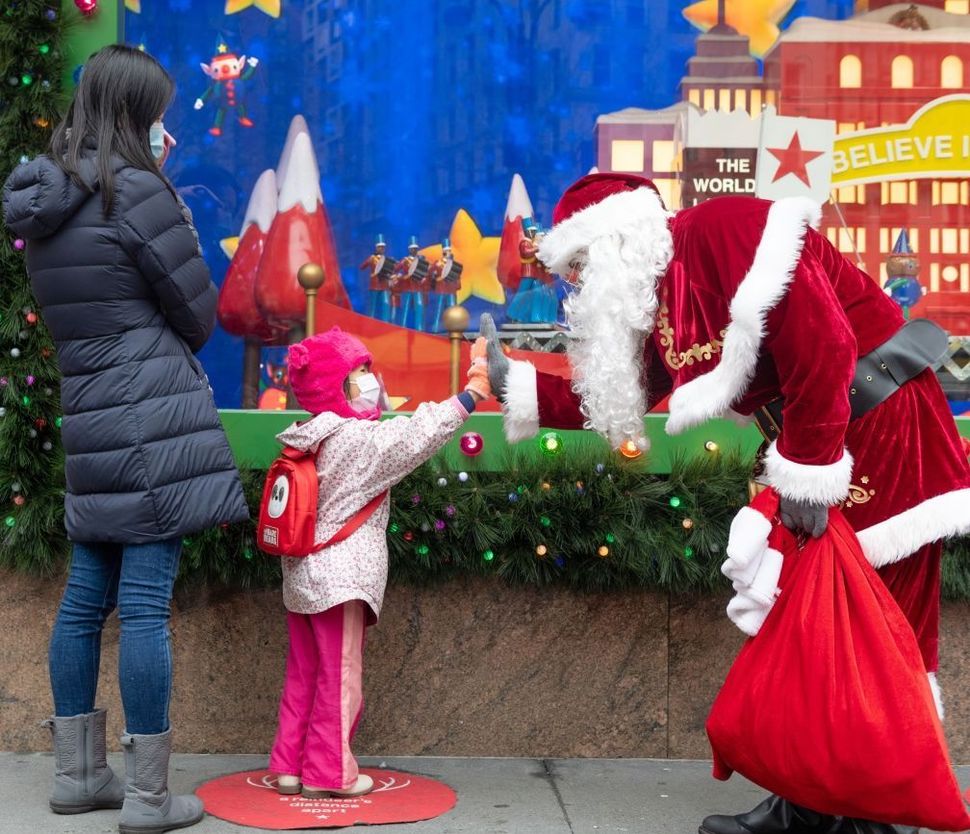 Darwin Romero, from Guatemala, dressed as Santa Claus high fives a child wearing a mask in front of Macy’s holiday windows at Herald Square on Christmas Eve on December 24, 2020 in New York City. This is Romero’s first year dressed as Santa and has spent the last three weeks working as Santa. By Alexi Rosenfeld/Getty Images

The phone lit up with an unexpected text message: it was from a staff member at my daughter’s preschool.

I was confused as to why they would be texting now, when the entire class was supposed to be in the middle of their holiday party.

“The party has started,” the text said. “Your daughter is in a backroom alone with a teacher so she doesn’t have to interact with Santa. You might want to pick her up.”

Imagine a 3-year-old sitting in a classroom with a teacher while all of her friends and classmates are celebrating at a holiday party down the hall: this is apparently the best solution to make sure that non-Christian students feel included at the holiday party. I genuinely think that the owner of this preschool was trying to do the right thing and respect my family’s wishes. But in the end, when it came to a choice between having all children feel included versus centering Christmas, Christmas won. It usually does in America.

Before I had kids, my relationship with the “holiday season” was pretty neutral. Having converted to Judaism almost 2 decades ago, I didn’t have the same memories of isolation my husband had from growing up as the only Jewish kid in a large high school. Christmas felt generically happy, and yet also not a real part of my present life. As Jews, we do other things, and it’s fine.

However, as the kids got older, it started getting more difficult. Once they hit two years-old, they began to be invited to “holiday parties” where Santa would inevitably pop up all in red and white. Unless you are enrolled in a Head Start program or have access to a publicly funded preschool in your area, many preschools in the United States are private, which means they have no legal limitations on religious observance. All you can do is appeal to their better natures, or try to afford a Jewish private school. At my eldest child’s preschool, we got through previous Christmas seasons relatively unscathed. There was a holiday party, but Santa would only drop by during the final five minutes, giving us ample time to leave before his arrival. His preschool teacher didn’t personally know any other Jews, but she knew that we were Jewish, and was totally cool with our request to have “minimal Santa.” The teacher additionally tried to keep the class crafts from being explicitly Christmas-y — yes to paper snowflakes and no to red and green decorations.

Everything changed when we placed our second child, our daughter, in a “nicer” preschool, one that was allegedly more aware and tolerant. They emphasized their focus on diversity and inclusion, and billed themselves as being particularly sensitive around issues of race, gender and religion. I really liked the owner of the preschool and found her to be thoughtful and caring. I even reached out to thank her for not including Santa on the holiday party invite, and shared how we had previously had to dash out of events before Santa arrived, which we were so happy to not have to do this year. This message was my first mistake.

Further conversations revealed that not only was Santa coming to the holiday party, but Santa was the party.

I explained to the preschool owner that I just wasn’t comfortable with having my daughter listen to a fictional Santa read her a story, while being told by her teacher and classmates that Santa is real. One of my reasons for my discomfort is the implied, often direct threat from other parents that your tiny child needs to make sure not to reveal that Santa doesn’t exist.

“How can you justify telling your child Santa isn’t real?” is an aggrieved question I get asked often, as if by telling my child the truth about Santa that I have ruined the holiday season for other children forever.

The pressure around Santa is enormous, and the weight of upholding the Santa Claus myth often gets unfairly placed on the small shoulders of children whose parents have told them the truth.

In the aftermath of this holiday party debacle, it was clear that the school viewed us as both a problem and responsible for finding a solution to our own child’s inclusion. We were negatively compared to other non-Christian families who “didn’t have an issue” with Santa. Those that are not bothered by the dominant culture are often held up as the positive example of a “good family,” whereas those of us that push for more inclusive education are seen as making trouble.

As a possible “compromise,” I was encouraged to come in (and take time off of work) to teach about Hanukkah, an option I declined. It’s baffling to me that the onus of making the classroom a more inclusive place falls on minority parents ourselves, and not the educators, but it’s a story I’ve unfortunately heard repeatedly from Jewish friends.

I know that alternative ways of celebrating are possible — ones that truly do include everyone. My son’s elementary school held a pageant one Dec., the theme of which was “Light in the Darkness.” The staff had researched many different cultures and their celebrations during this midwinter period, and the pageant story focused on all of the different cross-cultural narratives that display the innate human instinct to seek out and celebrate light. The kids performed songs from around the world, including Christmas and Hanukkah songs, that were all about finding and nurturing light in the darkness.

Coming away from this pageant, I felt part of the school community. It was strikingly opposed to the small and angry feeling of “You ruined our Christmas by making us include you,” that I’ve become accustomed to.

How amazing would it be if culturally Christian schools and teachers saw this time of year as an opportunity to enrich and broaden the perspectives of their students rather than blaming concerned Jewish parents for “taking away Santa?”

I know at least one child who doesn’t want to spend another holiday party alone.

Can you relate? Have you ever been asked to come in and teach about Hanukkah in your child’s classroom? Or do you celebrate Christmas as part of an interfaith family? We would love to hear more from our readers on how to have inclusive classrooms during the holidays. Write to us at [email protected] with the subject ‘Holiday Classrooms.’

Meg Keene is the Founder of Niqeva, a community for ambitious Jewish women, which she runs as part of Practical Business School. Meg is the Editor-in-chief of A Practical Wedding, which she founded in 2008. She has written two bestselling wedding books. Meg’s work has been referenced in The New York Times, The Wall Street Journal, NPR, and The Atlantic, among many other publications. She currently resides in Marin County, CA where she and her husband are raising two Jewish kids.

Our preschool welcomed Santa — and exiled my Jewish daughter