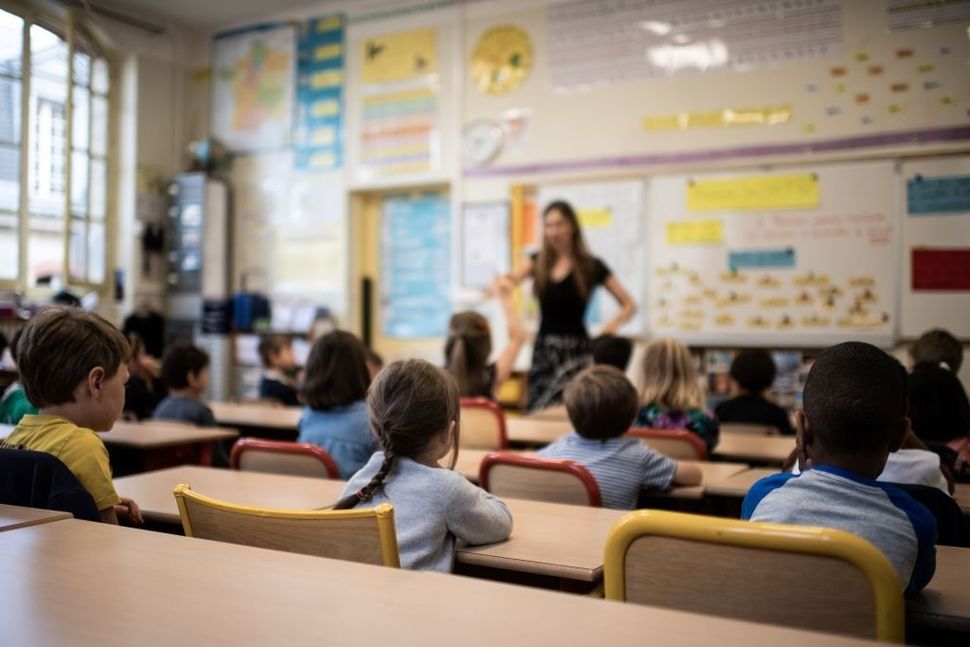 Children listen to their teacher as they sit in a classroom on the first day of the start of the school year, at the Chaptal elementary school in Paris, on September 2, 2019 By Martin Bureau/AFP via Getty Images

Last week, the librarian at my daughter’s school — Watkins Elementary School in Washington, D.C. -— instructed a class of third graders to “act out” the Holocaust. She instructed the children to pretend they were on a train going to a concentration camp and to pretend to shoot each other, dig mass graves and die in a gas chamber. One child was told to take the role of Adolf Hitler -— and to pretend to die by suicide.

My daughter is a fourth grader at Watkins, and so her class was not directly involved in this horrific “lesson.” We both found out simultaneously when The Washington Post ran an article on the incident two days after it happened. A friend texted me a link to the Post’s article, and I burst into tears as I read about what the children were made to do. My daughter was scared to see me cry and asked what was wrong; overcome with emotion and unable to think straight, I showed her the article.

Prior to that night, all our daughter knew about the Holocaust was that it was something horrible that happened to Jews and other minorities in the 1940s. My husband and I had planned on telling her more when she was in the sixth grade, which was when I had learned about the Holocaust. We had wanted to prepare ourselves to explain it in a way that we were confident would not confuse or scare her. Instead, we had to have the conversation because a trusted authority figure forced her classmates to reenact it. I can’t begin to imagine what it felt like for those third graders, but I know that the trauma they’ve experienced won’t dissipate quickly.

I grew up in a progressive town in the Midwest, and even there I wasn’t immune from antisemitism and from being made to feel like I was an “other” because I was Jewish. I was never asked to act out my own people’s genocide, but I vividly remember being seven years old and in a December Brownie meeting where the troop activity was making Christmas ornaments.

“I don’t celebrate Christmas,” I told my troop leader. “Oh, how sad!” she said in a pitying tone. I felt my fellow Brownies’ eyes on me, and I felt both embarrassed and adamant that what our troop leader had just said was wrong.

Thirty-five years later, her comment rang again in my ears when I read the Watkins media specialist’s response to the third graders question: why did the Germans kill the Jews? The librarian allegedly answered this profoundly important question by saying, “because the Jews ruined Christmas.”

My husband and I thought that it would be easy to raise a Jewish child in Washington, D.C., and in many ways it has been. We love our synagogue and appreciate that every December, our neighborhood’s business district displays a large menorah next to a Christmas tree. Strangers regularly compliment the Star of David necklace that I wear every day, and our neighborhood bookstore and home goods stores have annual holiday displays that feature the holidays celebrated by many different religions.

However, even in a diverse, welcoming and educated city, we still encounter antisemitism. A music teacher at my daughter’s public preschool didn’t understand why teaching children a song about Jesus was inappropriate. Antisemitic graffiti was found in a park several blocks from our house several years ago. Jewish friends of my daughter have been teased by their classmates for not celebrating Christmas.

Thankfully, experiencing antisemitism early in life made me an even prouder Jew, more confident to raise my voice in defense of my religion and against ignorance. The antisemitism that I experienced has also made me determined to raise my child to be proud of being Jewish, and to not take the religious freedom that she has for granted.

I hope that, in the weeks to come, the Chancellor of D.C. Public Schools and his team will conduct a thorough investigation into what happened at Watkins. I hope that the Watkins community will support these third-graders, their teachers and all of the students affected by what happened.

Most importantly, I hope that those children will one day be able to feel proud about their response to what that librarian made them do. Once they were back in their classroom, they told their teacher what had happened.

Because they spoke up, the librarian was removed from the school. I wish that I had been that brave when I was a child, hearing antisemitic words from teachers and other authority figures, and I am in awe of their courage.