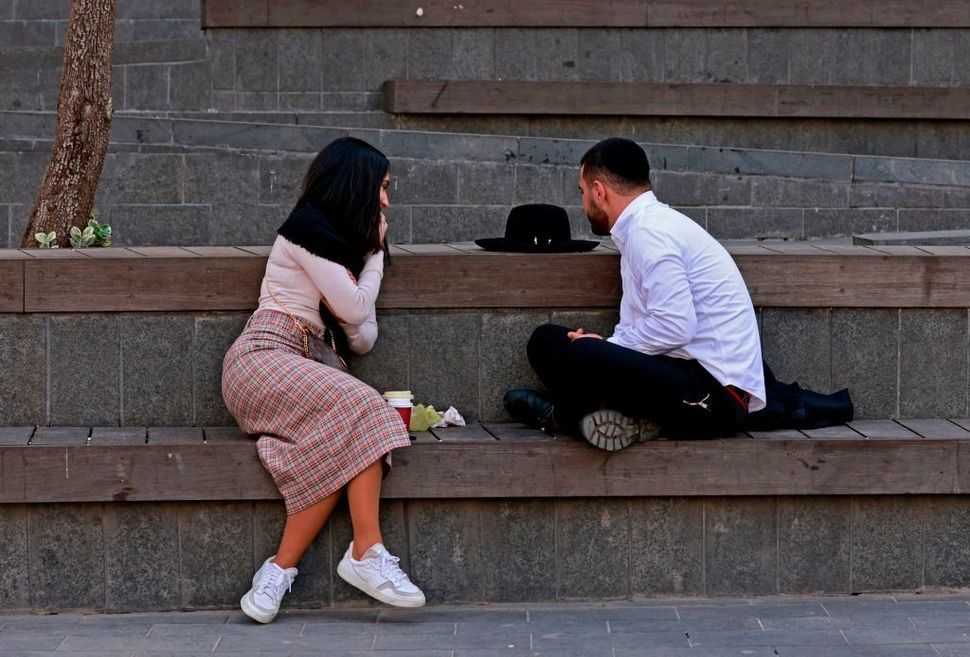 Haredi Jewish man and a woman chat as they sit on a bench at a plaza in the center of Jerusalem, on Jan. 27, 2021. By MENAHEM KAHANA/AFP via Getty Images

“You know, halacha (Jewish law) almost never allows contraception use,” an acquaintance boldly asserted to me recently. More than factually erroneous, the statement belied a misguided attempt to fill a void. In the absence of proper education, he had formed a lopsided picture of Judaism that would inform his personal moral code.

This is not an isolated occurrence. I was recently speaking with a medical school classmate of mine — a fellow Orthodox Jew — about reproductive rights in the United States when the conversation turned to Jewish views. The other student, who moments before discussed health care with confidence and erudition, faltered. She had easily laid out complex medical concepts but could not engage in an academic discussion of halacha or Jewish philosophy regarding birth control.

Nearly every Orthodox Jew I spoke with across the cultural spectrum admitted a striking lack of knowledge of halacha and Jewish philosophy on sex, reproduction and abortion. These are individuals whose religious beliefs form the cornerstones of their lives. Despite years of private Jewish education, many of us remain woefully ignorant of Jewish guidance in our daily reality. Why don’t we, as an Orthodox community, talk about sex? Why do we think we can afford not to?

In 1917 in Krakow, Poland, Sara Schenirer watched as young Orthodox women, deprived of formal Jewish education, began to receive secular education in institutions such as Krakow University. She saw the writing on the wall. In the absence of Jewish education for women, these ambitious students would leave Orthodoxy for opportunities in the secular realm. Anticipating a crisis, Schenirer began the Bais Yaakov movement, opening the first school that offered serious formal Jewish education for women. Thanks to Schenirer’s insight, there are now Bais Yaakov schools around the world offering elementary and secondary education for religious young women. Today we face a similar, if more insidious, predicament.

We ask our young people to use Judaism as a guide, to live their lives by its tenets and yet, on topics deemed controversial where guidance is ironically best suited, we are silent. We leave Jewish physicians, nurses, ethicists and public health workers to engage in complex discussions on patient care and macro-level policy without a solid understanding of Jewish text to inform their views. We leave Jewish adults to engage in active sex lives without a road map. We leave our students to parse through intricate discussions of consent and pleasure, of bodily autonomy and personhood, on their own. We simply do not discuss it, and this is a problem.

Currently, we entrust the sex education of young couples to kallah (bride) and chatan (groom) teachers in traditional pre-marriage classes. This system effectively means that young adults must wait until a few months before marriage to receive any education about sex and intimacy. These classes are often given by community members, some of whom have no training or educational expertise. The classes often center on the laws of taharat hamishpacha (marital purity laws), sometimes omitting the topic of sex altogether.

To be sure, some kallah classes are excellent, given by passionate and educated teachers committed to healthy discussion about sex. However, not all are pleased with their experiences. Many couples I spoke to for this article admitted that neither of them felt they had gotten passable sex education, Jewish or otherwise, from their kallah teachers. Some even remarked on harmful or halachically inaccurate statements their teachers made. It is clear to me that a better system, with oversight and intentional curricula, is needed.

As a community, we must start talking about sex — and it begins in school. Jewish communities rely on our private schools to curate complex and thoughtful halachic and philosophic education on a variety of topics. We spend months talking about kashrut (dietary laws), the rules of dress, the study of Torah — all daily basics of Jewish observance — but ignore sex. If we have weeks to discuss annual holidays like Sukkot, we have room in our curricula to talk about sex, a routine reality for most adults.

Many educators have recognized this need but struggle with how to meet it. Given that premarital sex is forbidden by Jewish law, educators must discuss sex in the shadow of this prohibition. This has the unfortunate effect of painting sex as “inappropriate,” muddying the waters of an already difficult conversation.

Researchers like Tova Hartman and Bruria Samet who have studied the issue of sex education in Modern Orthodox high schools in Israel, further note that religious schools practice evasion. “Rather than confront…this complex nexus of cultural ideology, pedagogical values, and personal desire … traditional educational institutions have developed pedagogical practices…to address them without addressing them.”

Fortunately, we have existing paradigms for what formalized Jewish sex education can look like. Ramaz’s Jewish Sexual Ethics class had been taught by Rabbi Haskel Lookstein since 1986 and has insisted on honesty and open dialogue since its inception. The course initially occurred over an 8-week-period in the sophomore year, prior to junior year’s sex-focused health class.

Jewish Sexual Ethics unabashedly discusses halachic and theological approaches to topics including marital sex, consent and coercion, infidelity, birth control and abortion. A former Ramaz student reflected to me that “Taking [this class] before health class allowed me to develop Jewish theology-driven values around sex; it allowed me to see it as sacred and sanctified, tied to the institution of marriage and a deeply positive thing.”

All students, he recalled, were encouraged to share and question openly, facilitating helpful and illuminating discussion. They especially appreciated learning about birth control, as they had been largely ignorant of the halachic perspective on the issue.

Sex can indeed be an awkward, controversial and difficult topic to cover, particularly in school. Institutions struggle to promote sex education without promoting premarital sex; more correctly, they struggle to have any productive conversation about sex at all. However, “difficulty” is a poor argument in the face of potential consequences. Taking a cue from schools like Ramaz, all Orthodox Jewish schools ought to start talking about sex.