Why Yeshivas Must Offer LGBTQ Education 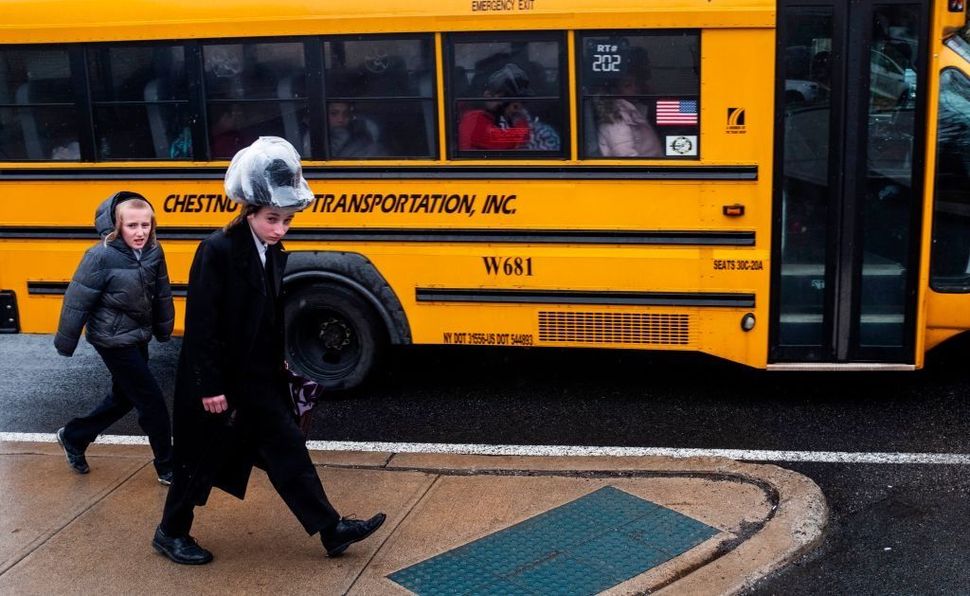 Two boys walking next to a school bus in a Jewish neighborhood in Monsey, Rockland County, New York. Image by Getty Images

The lessons were designed to prepare children for life in modern Britain.

Andrew Moffat, assistant principal of the Parkfield Community School in Birmingham, conceived of the No Outsiders program as a way of introducing LGBT people and the concepts of same-sex relationships and gender identity to children aged 4 to 11. That “And Tango Makes Three,” the well-known children’s book about two male penguins, Roy and Silo, who nurture a baby together, is one of the books taught gives something of an impression of how No Outsiders works.

Or rather, worked. At the beginning of the year, the so-called Alum Rock Parents’ Community Group formed in this largely Muslim pocket of Birmingham to protest against No Outsiders. Parents picketed the school bearing placards that read, “Our children, our choice,” and pulled their kids out of class. Flyers were distributed arguing, “It is blatant discrimination against our ethos to promote a gay ethos in our schools.” One parent, Fatima Shah, told the BBC the scheme was “not age appropriate” and “not what we send children to school for”: “We have no problem with them teaching them British values, but this is not teaching them British values, this is promoting homosexuality, this is confusing children.”

Come March their picket line had attracted the support of other conservative religious groups in Britain, including the schismatic Presbyterian group ironically called the Anglican Mainstream, known for their anti-gay politics and support for pseudoscientific conversion therapy. Also there in solidarity with the Alum Rock group was Shraga Stern, a gregarious and controversial Hasidic activist with a flair for publicity who, though holding no official position, has more-or-less appointed himself a spokesperson for London’s growing ultra-Orthodox Jewish community.

In January, lawyers for Stern wrote to the British Department for Education arguing that instructing children in British values should not extend to teaching them about certain “protected characteristics” including gender identity or sexual orientation. He further argued that Hasidim does not permit one to discuss homosexuality or gender reassignment “in a positive manner” and threatened that Haredi parents would rather leave Britain than send their kids to schools that “mention[ed] homosexuality, same-sex relationships or gender reassignment in a positive context.”

When the war between parents and Moffat in Birmingham was at its hottest, Stern then ratcheted up his own crusade with a bombastic letter published in the Sunday Times of London. It argued that the true threat to Jewish life in Britain was not Labour Party leader Jeremy Corbyn, whom he questionably contended “has bent over backwards to help Jewish people,” but “the anti-religious education policies being relentlessly pursued by Ofsted,” the government’s schools inspection body. (The letter was later repudiated by at least half of those who signed it, the Jewish Chronicle reported.)

Stern is a loudmouth and a renegade, condemned by his opponents as a homophobe. Aside from his support for Corbyn, who has long been engaged in anti-Semitic politics, he went into battle against Rabbi Avraham Pinter, chair of the ultra-Orthodox Union of Orthodox Hebrew Congregations, calling him a “kapo” for daring to negotiate with the Department for Education. Still, as the journalist Simon Rocker, who has extensively covered these issues, argues, Stern’s views do seem to reflect those of a far larger constituency within Britain’s Haredi community when it comes to LGBT-inclusive education and are part of an ongoing conflict between the government and ultra-Orthodox Jewish day schools.

In December 2018, the Beis Rochel d’Satmar Girls School in London was found in breach of equality law for segregating pupils on the basis of gender. Inspectors also found, according to the Jewish Chronicle, that “textbooks had been edited; in one, the sight of bare arms in images had been redacted, in another a reference to the Ice Age.” At Yesodey Hatorah Senior Girls’ School, meanwhile, Ofsted uncovered that “staff had systematically gone through every book to blank out any bare skin on ankles, wrists or necks.” In English, “texts such as Sherlock Holmes have had sections of text redacted. In science, pupils are not permitted to study animal or human reproduction, and other areas such as global warming are restricted.” And the school did not “fulfil [its] statutory duty to provide sex and relationships education.”

Schools like Yesodey Hatorah, and as is the case with many Jewish and other faith schools in Britain, are state-funded. Here, the British government has to strike a delicate balance. It is duty-bound to ensure equality law is implemented and that faith schools teach a modicum of LGBT awareness and sex education—using state funding as both carrot and stick. At the same time, lean too hard and there is a danger that ultra-Orthodox schools will simply reject government subsidies and oversight and go rogue. There is enough of a problem in Britain with underground, unregulated yeshivas that, housed in buildings not up to code, don’t teach English, math, and science without wishing to create more of them.

This, of course, is a dilemma not only for British authorities. In Antwerp, Belgium, for example, an employee of a publicly funded ultra-Orthodox school was instructing other teachers not to speak with pupils about sex and evolution. Back in 2016, several private day schools in Toronto indicated they would not implement a new curriculum that would have obliged teaching third graders to “learn to respect people with visible and invisible differences, including gender identity, sexual orientation, family background, and personal preferences.” And though New York made it professional misconduct for mental health workers to try and change a minor’s sexual orientation or identity back in January, last month Yeshiva University’s high school hosted a gay conversion therapist at a Parent Education Night.

And yet insist authorities must. To not teach children aged 4 to 11 about the existence of gay or trans people—and the British government is asking for nothing more than that—is a negligent act that fails to prepare pupils for the realities of modern society while harming those who may be LGBT themselves. To grant an exemption is to cave into anti-LGBT religious extremism and perpetuate cycles of bigotry and ignorance of the sort that fuelled Stern’s furious campaign in the first place. Whether in the case of No Outsiders specifically or LGBT-inclusive education in general, one must hold the principle that it is no longer acceptable for children to beholden to the prejudices of their parents.

Why Yeshivas Must Offer LGBTQ Education