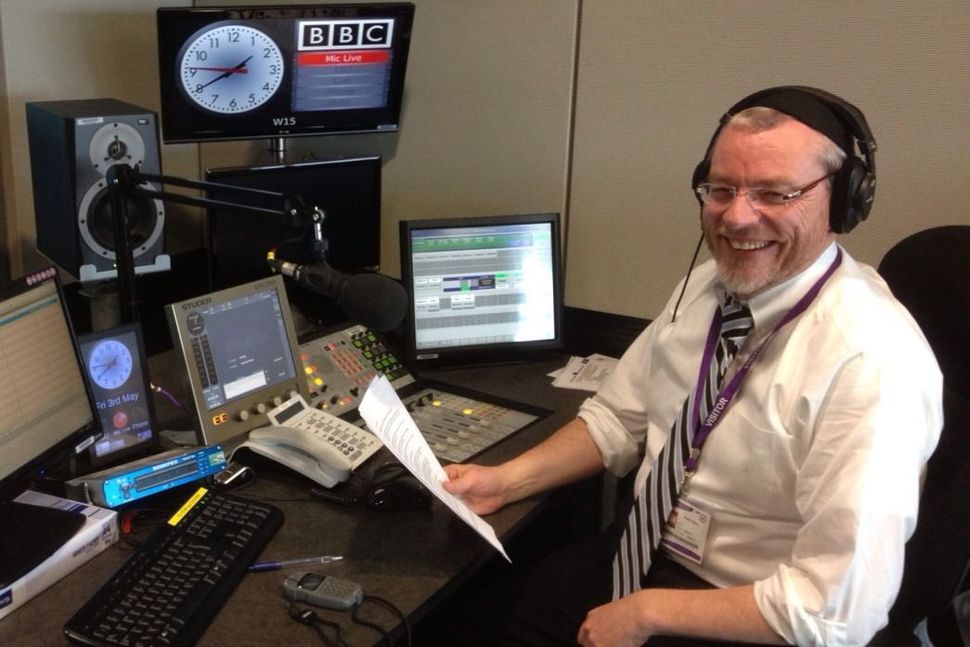 There is a joke that English antisemitism is: hating Jews more than is absolutely necessary.

On Jan. 3, 2022, I resigned from the BBC, where I have been a freelance broadcaster for over 30 years. I appeared regularly on the BBC World Service and on BBC Radio’s Terry Wogan Show, in addition to countless other news programs. Fifteen years ago, Her Majesty the Queen came to visit Manchester, where I lived. She spent the morning meeting with the Jewish community and other dignitaries. As she shook a local Jewish leader’s hand, she asked, “Is Rabbi YY here?”

The embarrassed fellow shook his head. She continued, “what a pity, we listen to him all the time on the radio and we think he’s awfully good!”

The BBC has given me a tremendous amount of professional support, and has helped me hone my skills both as a broadcaster and a writer. Over 30 years of working with some of the most talented producers and editors in the world will do that for you.

I made many friends at the BBC (affectionately known as “Aunty”) over those years and they were among some of the most gifted and kind people I ever worked with. But all that time I was aware of another thread that runs through the fabric of the BBC, and a recent incident made something in me simply snap. There is a well-documented culture of low-grade antisemitism that is present throughout the entire organization.

The BBC’s antisemitism usually managed to camouflage itself under the guise of anti-Zionism. On this occasion, they crossed the line and showed that in fact they hate Jews — more than is absolutely necessary. I severed my links with the organization and canceled six scripts I was scheduled to write and broadcast in February.

The reason I finally threw in the towel was because of the BBC’s coverage of an incident that occurred on Nov. 29, 2021 at London’s busiest shopping center, Oxford Street.

On Hanukkah, a group of Chabad-affiliated teenagers left their tour bus and danced on the sidewalk in celebration of the holiday. They were quickly surrounded by a group of men who threatened them, screaming antisemitic abuse at them. The attackers gave Nazi salutes, howled “F*** the Jews” and attacked the tour bus after they fled back inside, kicking and spitting on it. The footage is ugly. The kids were terrified.

When the BBC first reported the story, they alleged that the Jewish kids had shouted an anti-Muslim slur at their attackers. Numerous forensic experts who listened to the recording said that this claim was a complete lie.

The UK’s Jewish community was outraged. Hundreds led a large protest outside BBC headquarters on Dec. 14, pointing out that the BBC was attempting to paint the victims as perpetrators. The BBC doubled down and defended their reporting, arguing that a “brief reference to a slur was included so that the fullest account of the incident was reported.” Even after the “fullest account” has been widely refuted, the BBC still refuses to back down.

I posted about my decision and shared a copy of my letter of resignation on my personal Facebook page. I quickly received many posts congratulating me, while others said that I should have stayed to fight antisemitism at the BBC from within. That argument brought a smile to my lips: I had been doing precisely that for decades, and given the vastness of the organization and the extent it is infected with the cancer of antisemitism, that’s a bit like inviting me to make a sand castle on the shore to stop a tsunami.

In a recent interview with the UK’s Jewish Chronicle, I was asked: “Do you think that the BBC can be cured of its antisemitism?”

I didn’t hesitate before answering “No.”

The reason is simple: the BBC cannot fix its antisemitism problem if they refuse to acknowledge that they have one. The BBC is simply unwilling to do so.

If it did, it would start by publicly apologizing for its initial report and begin training its staff to be aware of antisemitic tropes and reject Jew-hatred.

If that happens, I will be very happy to broadcast for “Aunty” once again. But expecting that to happen is as likely as successfully using sand castles to stop tsunamis.

Rabbi YY Rubinstein was the official campus rabbi for the 14 universities of the Northwest of England for 23 years. He moved to New York in 2011 from where he travels to speak throughout the Jewish world. He is the author of thirteen books and a columnist for Hamodia and the Jewish Press.