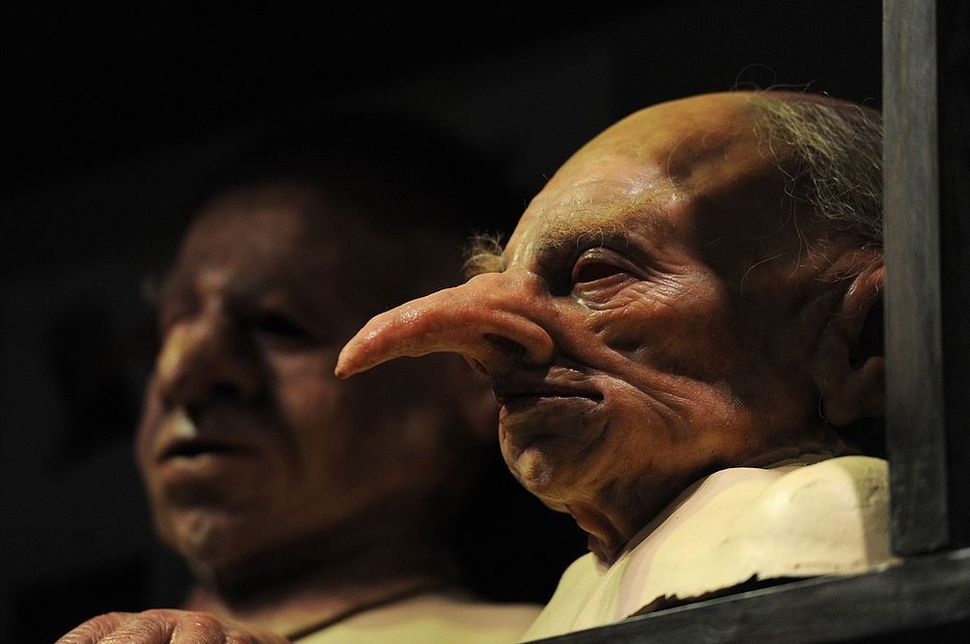 Rubber masks of the goblins at Gringotts Wizarding Bank are displayed during a preview of the Warner Bros Harry Potter studio tour in north London on Mar. 26, 2012. By Carl Court/AFP via Getty Images

I used to read “Harry Potter” to my son every night. (I do a killer Hagrid.)

You may recall that in “Harry Potter and the Sorcerer’s Stone” (“the Philosophers’ Stone” in the UK) Hagrid takes young Harry to Gringotts Bank, which is run by goblins. JK Rowling describes the first goblin that appears as “a head shorter than Harry. He had a swarthy, clever face, a pointed beard and, Harry noticed, very long fingers and feet.”

When I first read this description, I was immediately reminded of Oliver Twist’s first sight of Fagin, the antagonist thief character: “a very old shriveled Jew, whose villainous-looking and repulsive face was obscured by a quantity of matted red hair.”

It was pretty depressing that the bankers of the wizarding world came off like antisemitic caricatures of Jews. Maybe I’m overthinking it, I thought at the time. Until I saw the movie. “Holy crap,” I blurted when I saw the beady-eyed, hooknosed, suit-wearing goblins on the screen and the Magen David design on the floor of Gringott’s Bank.

My son was seven at the time. “What’s wrong?” he asked.

I took a deep breath and explained that some people associated banking and greed and money with Jews, and it seemed like the movie was doing the same thing.

I didn’t think that Rowling had anything against Jews; in fact, she amplified attention to the issue of antisemitism in the Labour Party at a time when it was not popular to do so. But it gave me pause when the same issue came up again with another British writer more recently—when British playwright Al Smith gave a scheming billionaire the Jewish name “Hershel Fink” in his play “Rare Earth Mettle,” which was about to open at London’s Royal Court Theatre. And yet nobody noticed until prominent British Jews like writer/comedian David Baddiel and director Adam Lenson spoke up. The Royal Court apologized, and Smith changed the character’s name.

Still, I have some questions. It can take years to develop a play. How did it get that far? How come no one thought to say, “Ms. Rowling, you may want to rethink those goblins?”

Another question: What’s a Jewish reader supposed to do about this?

Rowling is not the only author in the British canon to use antisemitic stereotypes to represent evil and depravity. In “Oliver Twist,” Dickens was intentionally portraying a Jew, as Dickens repeatedly refers to Fagin as “the Jew.” Fagin is a thief, stingy and he is cruel to children—textbook expressions, in other words, of the antisemitism of Dickens’s day applied for literary effect.

British literary tradition has a very long history of using the Jew as a signifier of greed and evil.

In the 14th century, in “The Prioress’s Tale”, Chaucer wrote of usurious Jews, with “wasp’s nests” for hearts, slitting a Christian boy’s throat for daring to sing a paean to Mary in the ghetto. Two centuries later, Shylock demands his “pound of flesh” in “The Merchant of Venice.”

Anthony Trollope, a contemporary of Dickens, published his great novel, “The Way We Live Now” in 1875. It’s about a Madoff-like crook, Mr. Melmotte, whose vague wealth from speculation carried Jewish associations for Victorian-era readers. Madame Melmotte, Trollope writes, “had the Jewish nose and the Jewish contraction of the eyes.”

Graham Greene, arguably the greatest mid-20th century British novelist, loved using Jewish stereotypes in his early books. In “Stamboul Train” (1932), the calculating Myatt is more sympathetic than Fagin. Nevertheless, Greene refers to him as “the Jew,” and a character describes Myatt as having “the too familiar features, the small eyes, the large nose, the black oiled hair.” In “A Gun for Sale” (1936), the villain, Sir Marcus, is an armaments manufacturer conspiring with other Jewish industrialists to start a profitable war.

The grasping Jew isn’t unique to British writing. You come across them in Tolstoy, Dostoyevsky and Chekhov. Or in Hemingway and Edith Wharton, for that matter. I don’t believe there is something uniquely antisemitic about British culture or people, and I speak from experience. I work part-time for a British company. I’ve published fiction set in England. Some of my best friends are British (ha-ha).

And yet I never had any illusions about the figure of the Jew in the British literary tradition, how, through the centuries, Jews keep reappearing in its plays, poems, and novels, and what these characters are meant to signify for the reader.

After describing the goblins on his podcast like something “straight out of ‘The Protocols of the Elders of Zion,’” Jon Stewart later clarified that he doesn’t think JK Rowling has anything against Jews—it was more that “some tropes are so embedded in society that they’re basically invisible even in a considered process like moviemaking.” Similarly when the Royal Court apologized for the blatantly Jewish name in “Rare Earth Mettle,” they cited “unconscious bias.”

The implication, I suppose, is that with diversity training, such tropes would disappear from literature. Except I’ve sat through diversity training courses for various corporate gigs, and I can’t recall anti-Jewish bias coming up. “Religion” was mentioned a lot, but never specifically Jews.

In his book “Jews Don’t Count,” David Baddiel describes how British progressives have removed or ignored antisemitism as a serious topic of discussion. He thinks it’s because Jews are perceived as having both “high and low status.” On the one (long-fingered) hand, we’re dirty and thieving. On the other hand, we’re moneyed and privileged.

This is astute, but it doesn’t fully explain the anti-Jewish motif reappearing in contemporary British writing. Surely unconscious bias does play a part. (We’re all guilty of it. Notice how I’ve used “British” when all the writers I’ve mentioned are English. There’s a difference.) But citing unconscious bias lets twenty-first-century writers off the hook too easily. Because the tropes in question are clichés, and a cliché is a sign of laziness. That’s what’s at the heart of it, I think—a combination of cultural amnesia and lazy thinking.

But let’s get back to the question of what a Jewish reader is supposed to do. I can speak only for myself by answering, “Keep reading.” Nobody needs to be canceled, no books need to be banned. We just have to recognize the complicated history of Jews in Britain, in Europe, in Western culture in its entirety. (On the function of Jews as a symbol in Western culture, I suggest David Nirenberg’s book, “Anti-Judaism”.) If we stopped reading literature when we were offended by antisemitism (or racism, or misogyny, or ableism, and so on) we wouldn’t have much left to read.

As for contemporary writing, we haven’t yet figured out as a society how to call out these lapses without resorting to censorship or sputtering Internet fury. But I’m optimistic, believe it or not, because it’s healthy to have public discussions about antisemitism. I am gratified that Jon Stewart and David Baddiel are not in the shadows but taking up space as proud Jews in the culture of America and Britain.

As for my son, the goblins ironically provided an opportunity to open up a continuing conversation about stereotypes. Thankfully he’s moved on from “Harry Potter” to manga and animé, genres with little to say about Jews. Yet.