My home almost burned in Colorado wildfires. Jews have a special responsibility to fight back 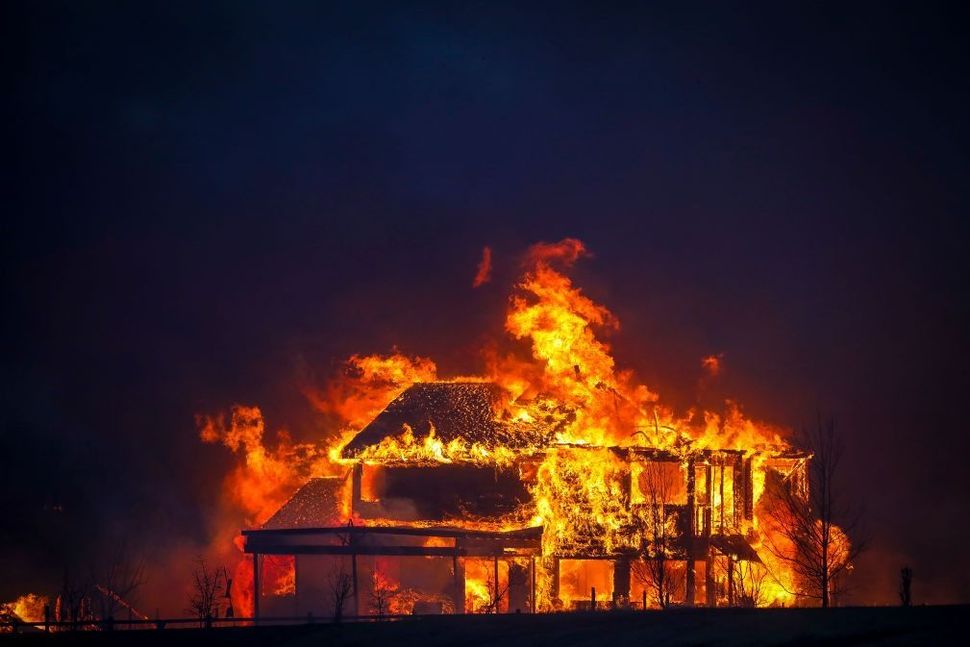 A home burns after a fast moving wildfire swept through the area in the Centennial Heights neighborhood of Louisville, Colorado on Dec. 30, 2021. By Marc Piscotty/Getty Images

On Dec. 30, 2021 my hometown of Louisville, Colorado burned. I had an appointment earlier that day at Avista Adventist Hospital, mere hours before it had to be evacuated because of approaching flames. I saw smoke to the west but didn’t give it much thought, though I was well aware of the high winds. As the realization of the approaching fire began to dawn, it set off a flurry of frantic phone calls and panicked packing.

My family and I had to flee the Marshall Fire, along with almost 35,000 of our neighbors, grabbing pets, valuables and anything we could carry. Most people went north, but we went west to the mountain town of Nederland. While we had shelter, we had no internet and spent the night communicating with friends and family to get news. At one point, we listened — via telephone — to our mayor reporting on the fire from my sister’s TV in Minnesota. It was only at 5:30 the next morning that we learned that our home was still standing.

We were among the lucky, despite a multiple-day evacuation. Whole neighborhoods were leveled, including one just a half-mile from my house. Early estimates suggest the Marshall Fire caused more than $513 million in damage— but the true cost is the leveling of neighborhoods, and of families with nowhere to come home to. The loss is unfathomable.

Fires used to be a seasonal phenomenon, but have become year-round as a result of climate change. Record temperatures and drought can turn grasslands into tinder, forests into kindling, and all it takes is a stray spark to destroy thousands of acres and whole communities. Having witnessed the destruction that warming temperatures wrought in my community, and considering the lack of meaningful action at a federal level, I am convinced that Jews have a unique role to play in the fight to save our planet.

Since the 1970s, Colorado’s wildfire season has increased by 78 days. This isn’t a fluke — 90% of the Western half of the United States is experiencing a prolonged drought as a result of climate change. Consistently low rainfall and snowpack levels and above-average temperatures over the past 20 years have depleted reservoirs, dried up forests and set the stage for longer and more intense fire seasons. Some scientists believe the West is experiencing a multi-decade megadrought.

Nearly 80% of American Jews believe climate change is a crisis or a major problem, and 71% of Americans at large worry that global warming will impact future generations. As Jews, we have biblical and historical experience confronting existential crises, being displaced and reinventing the way we live. It is never easy to overcome, but it’s only possible if we translate our pain, grief and anxiety into action. To do that, we need to bring the full power, people and spirit of the Jewish community to address climate change collectively.

The West isn’t the only region that is experiencing the impact of climate change: more than 40% of Americans live in counties hit by climate disasters in 2021. In that context, it’s not surprising that climate change has jumped to the top of the list of issues Americans — and the American Jewish community — are concerned about.

And yet despite growing urgency, we haven’t seen meaningful action at the federal level. Congress is currently considering the Build Back Better Act, a bill that would invest more than half a billion dollars in clean energy, sustainable transportation and cleaning up polluted communities. But it’s being delayed and whittled down by the fossil fuel industry and elected officials who do their bidding.

We still have a chance to get it across the finish line if we make our voices heard, whether that’s by showing up on our Senators’ doorsteps or calling their offices. Across the country, Jewish Americans are coming together to protect the communities we love and call home, and to take collective action on climate change. Climate-concerned Jews across the country are forming action groups called Dayenu Circles at synagogues, JCCs and on college campuses, transforming our organizations to serve as models of what a just, thriving, resilient and clean-energy-powered future can look like. Most importantly, Jews are coming together to confront this crisis collectively, with spiritual audacity and bold action.

The Marshall fire will have a long-term, devastating impact on my community. We are resilient and will ultimately recover, but much has been lost forever. We are praying for the safety and well-being of our community, offering hizuk— courage — to those who were impacted as we take steps to recover and rebuild. If you are moved to help those in need, please consider contributing to JEWISHColorado’s Boulder Fires relief fund.

I am reminded of a story from the Talmud where Honi sees a man planting a carob tree. He asks the man how long it will take for the tree to bear fruit, and he responds: “Seventy years.” Honi wonders incredulously if the man really thinks he will be alive seventy years from now to enjoy the tree’s fruit, and the man smiles. He answers that when he was born into the world, he enjoyed the fruits from carob trees that his father and grandfather planted. “Just as they planted for me, I am planting trees for my children and grandchildren.”

The choices Americans make on climate change in 2022 will decide what kind of world our children and grandchildren inherit. Like the carob trees that nourish a community years after their planting, the Jewish community must take action on climate change so that we can thrive from generation to generation —l’dor v’dor.

Shari Edelstein is a philanthropic consultant, a member of Congregation Bonai Shalom in Boulder, Colo. and is committed to social justice, including safe guarding the environment. She will be serving as the Manager of Foundation Relations and Special Projects at the Institute for Jewish Spirituality starting in Feb. 2022.

My home almost burned in Colorado wildfires. Jews have a special responsibility to fight back