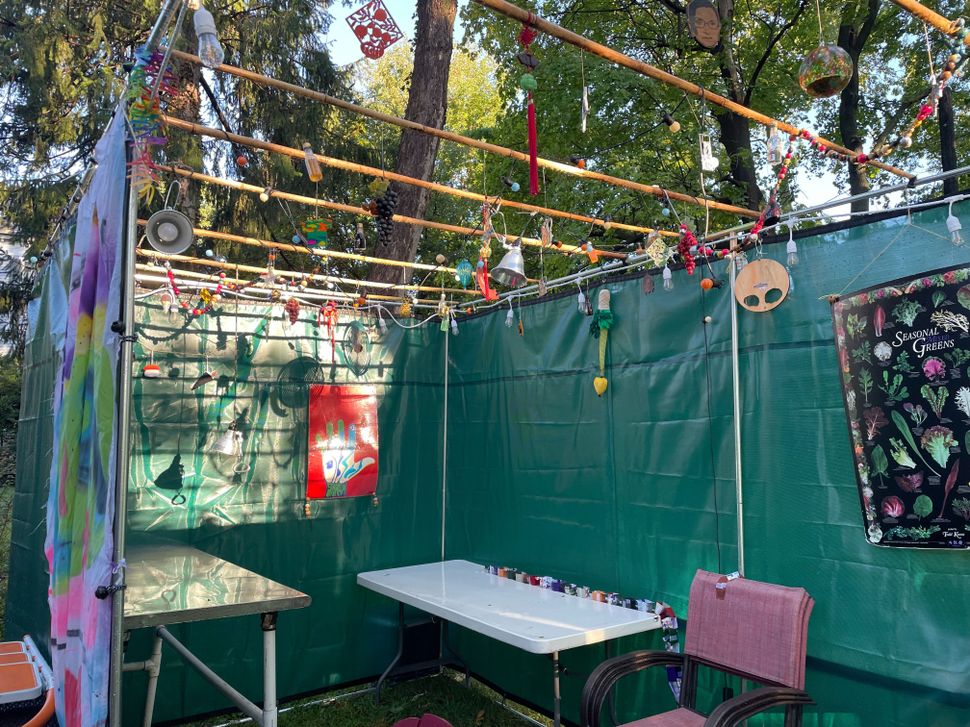 The morning after the storm, our sukkah was still standing, if quite soggy. By Jodi Rudoren

I had planned to headline today’s dispatch “7 reasons Sukkot is my favorite holiday.” Then a storm blew the roof off our sukkah.

Having been evicted from my basement office by Hurricane Ida, I was working at a desk on our enclosed front porch Thursday afternoon when the wind started howling. I hardly looked up as the kids tromped through on their way from school to snack.

“The schach is gone!” my daughter, Shayna, cried when she got to the kitchen, using the Hebrew term for sukkah-roof material. “Like, gone gone.”

Actually, it was in a lump behind the sukkah. We use bamboo mats for schach these days, rolling them over bamboo poles, which themselves are Velcro’d to the sukkah’s metal frame.

Now, the lights and precious decorations we hang from those poles were dangling, exposed, as the wind whipped the unsteady shelter, while the weather app on our phones promised driving rains. One of the clip-on lights swung precariously near eye-level. A plastic pineapple had crashed to the ground. Chairs were knocked over, and the new floor mats we’re debuting this year were flapping around. Yikes.

Yes, Sukkot has always been my favorite holiday.

I grew up with an elaborate wood sukkah, custom-built by a Polish architect named John, who was introduced to my dad by my great-uncle Lou, a World War Two vet turned contractor. We painted the outside forest green, stained the inside dark brown, and every year strung chains of fresh cranberries and popcorn to loop from the pine schach.

It could sit 24 for dinner — 24! — and my parents hosted every night of the week-long holiday, elaborate dinners with two soups and two proteins, plenty of wine and whiskey, china and stemware. A week-long Jewish Thanksgiving! What’s not to love?

Throughout my 20s and 30s, when I was living in Los Angeles and Washington and Chicago and New York, I almost always got myself — and, eventually, the husband and kids — back to Newton for at least part of Sukkot. When we moved to Jerusalem in 2012, to an apartment with a lovely large mirpeset (deck), it felt time to create a sukkah of our own.

The husband bought a poles-and-sheets number at a pop-up stand on our street corner, and each fall returned there to procure a pile of huge palm fronds for schach, then lug them up three flights to said mirpeset (he always worried he was getting the “American” price).

Not thrilled with having a from-the-kit model, we bought fabric markers and later spray paint for guests to sign the sheets, creating what we declared the World’s First Graffiti Sukkah, and hosted many lovely holiday meals inside, though mostly on paper plates and never with two soups.

When we moved to Montclair in 2016, dad suggested we adopt his sukkah, but our garage-less house had nowhere to store it in the off season, plus a sukkah that seats 24 and requires a construction crew to set up and take down was frankly intimidating.

We did inherit a box of decorations: miniature liquor bottles taken from airplanes in the 1970s; Chinese lanterns my friend Janice brought as gifts during her annual dinners in the sukkah; that plastic pineapple now lying on the ground.

We put them up each fall, and asked guests at our annual “open sukkah” party to bring more: we collected wood-carved likenesses of Michelle Obama and Ruth Bader Ginsburg; a chain of plastic leaves and berries made at JoAnn’s fabrics; felt sushi; a giant pipe-cleaner Star of David; a sign that welcomes “all shapes, sizes, colors, languages, cultures, beliefs, ages, preferences, statuses and faiths.”

I have never been one of those Jews who love Christmas, but I realized that I could easily find “sukkah ornaments” whenever we visited a museum or went on vacation.

So there’s a glass bulb blown at historic Jamestown, near Colonial Williamsburg, and one from the Corning Glass Museum; a pounded-metal turtle, pressed-paper dolphin and starfish from various beach towns; a blue glass Hershey’s Kiss from Hershey, Pennsylvania; rectangular Frank Lloyd Wright beauties from Fallingwater; a Dia de los Muertos doll from New Orleans. There’s also “I ❤️ Grandma” and “I ❤️ Grandpa” stained-glass the kids made when they were small (and Grandma and Grandpa were alive).

My parents — known as Nana and Papa — now come to us for the holiday, a great honor.

This year, I decided we needed a new sukkah — the Israeli poles were bent, the sheets were ripped; the whole thing had practically collapsed during a rainstorm in 2019. We ordered the forest-green mesh kit from The Sukkah Project, complete with turn-key doodads for easy setup, and those Velcro straps to hold the roof-poles on, a major improvement.

It’s a little smaller — we used to be able to sit 16 for dinner, now 12 will be a squeeze — but also taller, all the better to display our heirloom ornaments. To prevent the chairs from sinking into the earth, we found these woven plastic straw floor mats, which added a lot of flair.

And so, on Monday evening, we welcomed family friends for a perfect sukkah dinner: the weather had cooled just enough to enjoy the Persian beef and apple stew — Khoresh — that Tannaz Sassooni had written about in the Forward.

Then came Thursday’s storm. Putting the bamboo schach back on with the wind and coming rain seemed both impossible and imprudent, but leaving the lights and glass ornaments exposed also felt risky. We briefly considered taking the whole thing down, but with guests coming all weekend, we’d never have time to rebuild.

(For what it’s worth, there is halachic debate, both prompted by recent hurricanes and dating back to Talmudic times, over whether one can or even sometimes must take down the sukkah during chol hamoed, the festival’s intermediate days.)

We pulled up the floormats and shoved them and the rolled bamboo schach into the stairs leading down to the basement. We strategically placed all the outdoor tables and chairs we have, plus a couple of coolers, to shore up the metal poles. And then we went inside and hoped for the best.

I thought back to a few weeks ago, when Hurricane Ida brought six inches of water into our basement. We were thrilled the sukkah decorations had been spared, and rushed to rescue the wet boxes of other memorabilia.

Around 11 p.m., after we’d done what we could, the kids said they were too scared to go to sleep. I didn’t understand at first — the water was receding, the rain slowing. But the next day, my daughter explained that she was not so much scared that something would happen that night as  scared about the state of our planet. Climate change had come to our basement.

Now it was threatening our sukkah. What if these temporary huts meant to recall the ones our ancestors used while wandering the desert for 40 years could not withstand the newly fierce wind or whatever would come next?

With guests coming all weekend, that’s too much to tackle.

After the rain stopped this morning, we went outside to find the sukkah still standing. Some of the chairs had blown over, and the paper chains that had somehow made it to their third season were, unsurprisingly, a soggy mess. But the little liquor bottles are still dangling from the bamboo poles, the Seasonal Greens poster still on the wall; even an old felt lulav-and-etrog from when the kids were in preschool survived.

The weather app promises a strong sun all day. With the schach off, at least everything should dry off a lot quicker.