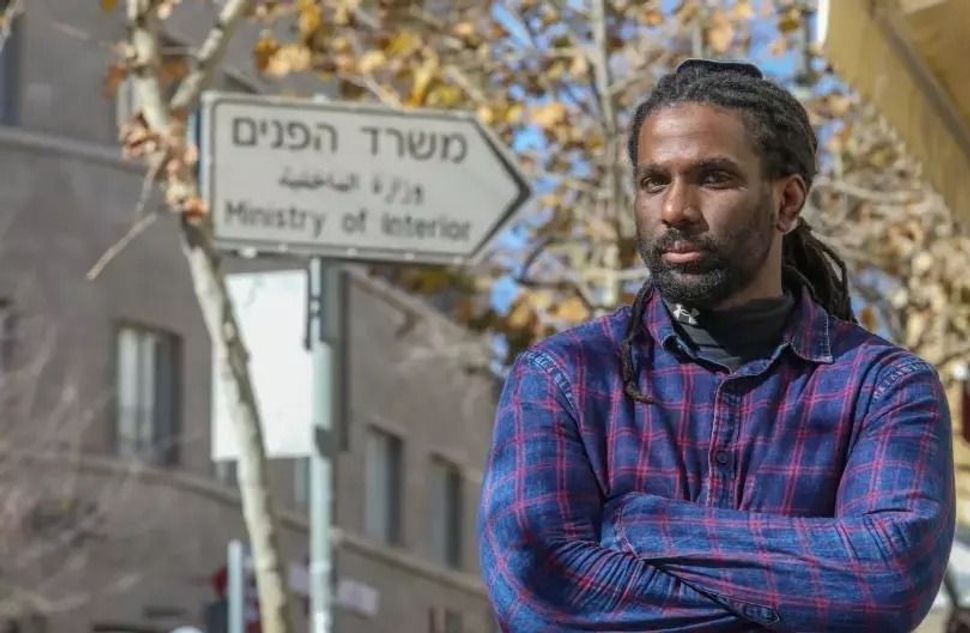 For eight days, I camped outside of Israel’s Ministry of the Interior on a hunger strike, protesting the injustice I have suffered at the hands of the Israeli state during my nearly 4-year journey toward citizenship.

It was under 40 degrees most nights. I ate nothing, drank sips of water and only left to pray at the Western Wall three times a day. I can still feel the chill in my body from sleeping on cold Jerusalem stone and my feet are swollen from days of walking back and forth.

But it seems like my efforts have paid off: after three and a half years of attempting to make aliyah, the government of Israel has officially informed me, in writing, that I will be given oleh status on Jan. 1, 2023, which will officially make me a citizen of Israel.

I am grateful to be home with my wife and children instead of camping outside the Ministry of the Interior, and I am deeply moved by the overwhelming show of love and support I have received throughout this torturous process. Yet my happiness that Israeli citizenship is finally in sight does not diminish the injustice of what I experienced.

I first applied to make aliyah on May 9, 2018. Despite finishing an Orthodox conversion in 2017 which was accepted by the Israeli Rabbinate, multiple aliyah applications and countless individuals testifying on my behalf, it took a painful hunger strike to convince the Ministry of the Interior to give a definitive answer on when I can become a citizen.

Over the course of my 11-year Jewish journey, I have been proud to embody the Jewish idea of teshuvah, that I had the wisdom to learn from my past, and chose to ‘return’ to Torah. Now I live an observant Jewish lifestyle and am an upstanding member of my community. But it has become painfully clear that while my teshuvah is accepted by Hashem, for some reason, many will not allow me to move past my criminal record.

I was not born Jewish, something I share in common with many olim as the right of return applies to converts as well. I had a life-changing experience in prison, where I had been incarcerated for the distribution of oxycodone and unlicensed dealing of firearms. While forced to sit in the library during an extended lockdown I saw someone studying a book in a foreign language. I asked what it was and he told me it was the Torah. Then I asked about the boxes on the bottom of the page and he explained the idea of rabbinic biblical commentary, which started me on my Jewish path.

After serving only 21 months of my 30-month sentence, I was released early and sent to a halfway house. My first trip out was to the nearest synagogue, B’nai Israel in Baltimore, Maryland. At B’nai Israel I found a welcoming Modern Orthodox synagogue and Jewish community. Being hosted for Shabbat meals and invited to community events showed me how much I was cared for. Before I knew it I was a part of the community and was loved and accepted in a way that I had never felt before.

Professionally I found work as a personal trainer and eventually opened a personal training studio. I attended college at Towson University where I was a regular at Hillel and a straight-A student. Using my fitness expertise, I also built close connections with the Baltimore Police Department, consulting on their training programs and fitness testing.

As I entered into my last semester of undergraduate studies, I applied to graduate school. Despite having to “check the box,” I received two offers and believed I would attend the University of Florida after I finished my degree, but was heartbroken when I was denied the ability to register for classes due to my criminal record. My bags were packed but suddenly, I had nowhere to go.

It didn’t take long to decide my next destination — Israel, the homeland of the Jewish people. I began by taking a year to study at the Pardes Institute of Jewish Studies. It was one of the best years of my life, and not just because of my love for Jewish learning. I met Tamar, my future wife. We got engaged and were excited to start our life together in Israel after I finished my studies.

A few months before my student visa ended, I started my aliyah application and submitted it three weeks before my student visa expired in 2018. After being assured by the Ministry of the Interior I was still in the country legally, I traveled abroad to Europe. But upon my return, I was abruptly detained, interrogated and threatened with deportation. I was told that I was a criminal and Israel is not a place for criminals. Finally after repeatedly requesting my lawyer, I was allowed back into the country with a three-month travel visa, which at least gave me legal status in the country until after my wedding date.

After our wedding, I started inquiring about the response to my aliyah application. After many fruitless trips to the Ministry of the Interior, they finally scheduled an aliyah interview with me.

I would have preferred another airport interrogation. Over and over I was asked demeaning questions like:

“How could you be a convert, you don’t look like a convert?”

“With your criminal record, how could your wife’s parents be happy with you?

“You are Orthodox with a smartphone? How can that be?”

Eventually, I was released with another new travel visa and was told they would get back to me soon. Three months went by and I still didn’t have an answer, and my visa was set to expire again. I went to renew it and was denied. Without a visa, I was illegally in the country again. I was warned during my detention that if this ever happened that I would be hunted down and deported.

On Jan. 20, 2019, the Ministry of the Interior officially denied my aliyah request. Surprisingly, my criminal record was not mentioned at all. The letter said my Orthodox conversion from my home synagogue in Baltimore was “unacceptable,” a statement that made no sense. The conversion had been accepted for our marriage through the Israeli Rabbinate, which has a much stricter standard than Israel’s immigration requirements do.

There are hundreds of thousands of Jews who were Jewish enough to become citizens but are legally not allowed to marry in Israel without first converting to Judaism. Even Israeli gymnast Artem Dolgopyat, who became a national hero for winning Israel’s second-ever gold medal in the 2020 Summer Olympics is not legally allowed to marry anyone inside of Israel’s borders as his mother is not Jewish.

The letter denying my aliyah request also stated that I can apply for citizenship based on my “relationship” with an Israeli citizen, my wife Tamar. After consulting with lawyers, we decided to apply. I had already been without a work permit for the last year and a half, and my wife was five months pregnant.

This application for citizenship on the basis of my marriage to an Israeli citizen was denied as well, because our marriage was conducted in Israel. For citizenship determination based upon marital status, Israel only accepts civil marriages performed abroad, as civil marriages do not exist in the Jewish state. I can’t stress enough how bizarre this situation was: The only type of marriage that Israel finds acceptable for legal status in Israel is illegal to perform in Israel. If by this point in my story you’re finding yourself confused and enraged by the arbitrary and absurd nature of this bureaucracy, you’re not alone.

Eventually, I got a work permit based on being in an “unmarried relationship” with an Israeli citizen, a longer process that grants fewer rights. The most significant right I lacked was access to the national health care system, but I was finally allowed to work and provide for my family. Unforeseen consequences of my legal status continued to plague us with serious challenges. When my wife Tamar gave birth to our first child, she was presented with a surprise 5,000 shekel hospital bill. Because she was married to a “foreign national,” Israel did not automatically cover the costs of the birth as they would for every other citizen.

Meanwhile we continued to fight for my citizenship to be approved but no one could help us. The primary barrier was that the Ministry of the Interior refused to answer our appeal. To try to improve my status in the country and help my case for aliyah, we finally decided to get a civil marriage abroad. We flew to America and got married again by a clerk at the court in Feb. 2020. But it didn’t help. This time the Ministry of the Interior told me I couldn’t register as married to my wife because Tamar was already married — to me.

This illogical situation began attracting media attention, and in response to public pressure, my conversion was finally recognized by the Ministry of the Interior as acceptable to make aliyah on Dec.15, 2020, which we hoped would mean oleh status. But instead I was informed that I would receive an A5 visa, moving me up from a “working tourist” to a “temporary resident,” which at made me eligible for national health care. On Jan. 10, 2021 I received this visa and started a “trial period” because of my criminal record.

My wife and I have been told continually that the delays I have experienced are due to my criminal record. It is frustrating to be continually judged when sex offenders such as Malka Leifer and Yona Weinburg were able to easily make aliyah and avoid justice for their crimes. In Leifer’s case justice caught up with her, but it is still deeply insulting that others with criminal histories have been allowed to become citizens but I am still waiting.

I am a Jew. My wife is a Jew. Our children are Jews. We all love this country and will not leave. I love Israel too much to stop fighting for my right to live here. I simply question why my process has been such a hard fight.

David Ben Moshe is a writer, speaker, and fitness coach. His work focuses on race relations, criminal justice reform, fitness, Judaism, and Israel. He’s currently working on a memoir of his journey from federal prison in the United States to Israel where he lives with his wife and two children. Connect with him on Twitter @RealDBenMoshe