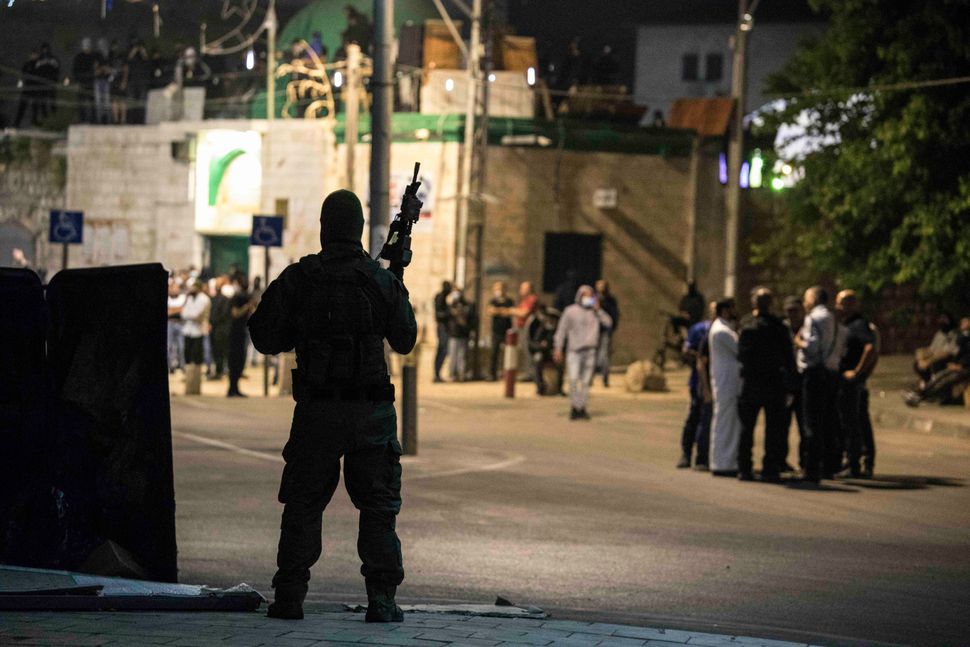 LOD, ISRAEL – MAY 13, 2021: The border police are positioned near the mosque to monitor the negotiations between the police, local Arab elected officials, the imam and the young people gathered at the mosque. Image by Laurent Van Der Stockt/Getty Images The current cycle of violence between Israel and the Palestinians dispels two major illusions.

The first regards the impact of the Abraham Accords of September 2020, which normalized relations between Israel and the United Arab Emirates and Bahrain. In announcing the Accords, President Donald Trump boldly declared that “(a)fter decades of division and conflict, we mark the dawn of a new Middle East.”

But the idea that a new Middle East would emerge from a peace treaty between Israel and two small, distant, oil-rich Gulf States — with which Israel had never fought a war — was an illusion.

The events of the past two weeks have reminded us that the core of the Arab-Israeli conflict is, and has always been, the still unresolved tensions between Israelis and Palestinians. No amount of wishful thinking on the part of Donald Trump, Jared Kushner or Israeli Prime Minister Benjamin Netanyahu will change that.

Not that they haven’t tried. For the past twelve years, Netanyahu and his allies have worked to remove the issue of Palestine and the Palestinians from both the global and regional agendas. They preached the gospel of Trump’s 2019 “Peace to Prosperity Plan,” which included a greenlight for Israeli annexation of West Bank settlements and territory, trying to show that Israel could be accepted in the region without ending its occupation or stopping its settlement enterprise in the West Bank.

Pursuing this logic, Netanyahu continued to support the settlement project with full vigor, hoping to erase the Green Line, the 1949 armistice line that serves as the internationally recognized border between Israel and the territories it later occupied in 1967.

But after more than half a century, it is clear that Netanyahu cannot simply wave a magic wand and declare the West Bank a part of Israel. On the contrary, there is a growing body of legal opinion that Israel’s occupation, as reflected in the differential legal status, infrastructure, and judicial systems for Jews and Arabs, meets the international legal standard of apartheid set forth by the International Criminal Court.

The past ten days have made it clear that Palestinians and their national aspirations are not going anywhere. Palestinians themselves, from East Jerusalem to Gaza, have no intention of letting Israel forget this.

But there is another illusion that the recent events have dispelled. Israel proudly declares itself to be a robust, functioning democracy. For its Jewish citizens, this is largely true, though over the course of the long Netanyahu decade, there has been a marked erosion brought on by a series of anti-democratic laws limiting speech and other freedoms. But for Israel’s Arab citizens, who comprise 20% of the population, Israel’s democracy is far less functional.

The recent unrest in Israeli cities such as Lod, Acre, and Jaffa has given voice not only to a resurgent Jewish supremacy, but to Arab protest over deep structural discrimination that has existed since Israel’s creation in 1948. Some of the Knesset’s first acts — for example, the Absentee Property Law (1950) or the Nationality Law (1952) — formally enshrined a different legal and political reality for Arabs than for Jews within Israel.

Fifty years later, the official Or Commission report of 2003 arrived at the conclusion that “(g)overnment handling of the Arab sector has been primarily neglectful and discriminatory.” Rather than reverse this pattern, Benjamin Netanyahu has lent his own formidable rhetorical powers to the stigmatization of Israeli Arabs — and coordinated the entry of Jewish racists who seek to marginalize or remove Arabs from Israeli public life into the Knesset as his political partners.

In this regard, Israel is failing on its original promise. In opting for an exclusive ethno-nationalism that privileges Jews at the expense of Arabs, Israel has violated both the spirit and letter of the powerful thirteenth paragraph of its founding Proclamation of Independence: On one hand, the Proclamation stated that “the State of Israel will be open for Jewish immigration and for the Ingathering of the Exiles.” But it quickly added these stirring lines: “it will foster the development of the country for the benefit of all its inhabitants; it will be based on freedom, justice and peace as envisaged by the prophets of Israel; it will ensure complete equality of social and political rights to all its inhabitants irrespective of religion, race or sex; it will guarantee freedom of religion, conscience, language, education and culture; it will safeguard the Holy Places of all religions; and it will be faithful to the principles of the Charter of the United Nations.”

As long as Israel fails to realize this vision for its Arab citizens, it will fail its promise. And there other, troubling signs that Israel is failing the test of democracy: the cult of personality around Netanyahu, the corruption that encircles him, the vast gaps in budgets between Arab and Jewish cities, the legislature’s antidemocratic tendencies first among them, the 2018 “Nation State Law” that clearly states that only Jews have the right to self-determination in Israel.

But it is not too late. Israel’s civil society sector is filled with thousands of people, Arabs and Jews alike, who labor night and day, every day, to bring a measure of justice and equality to all citizens of the land.

They have a vast challenge now that the veneer of Israel’s one-sided democracy has been scrubbed off. What is required is a new paradigm to guide Israel in its next phase of existence. It can no longer be the platform of Jewish supremacy, nor is it sufficient to advance the empty promise of co-existence. What is needed is a genuine moral, political, and economic commitment to full equality for all, Arab and Jew alike.

For those committed to Israel but concerned that its current trajectory will end in disaster, this means adopting a multi-tiered strategy that includes fighting the occupation, making major new investments in Arab society in Israel, and vigorously promoting the ideal and praxis of a truly shared society equally open to Jews and Arabs.

Only then will democracy in Israel realize its initial promise.

Daniel Sokatch and David N. Myers are the CEO and Board President, respectively, of the New Israel Fund.