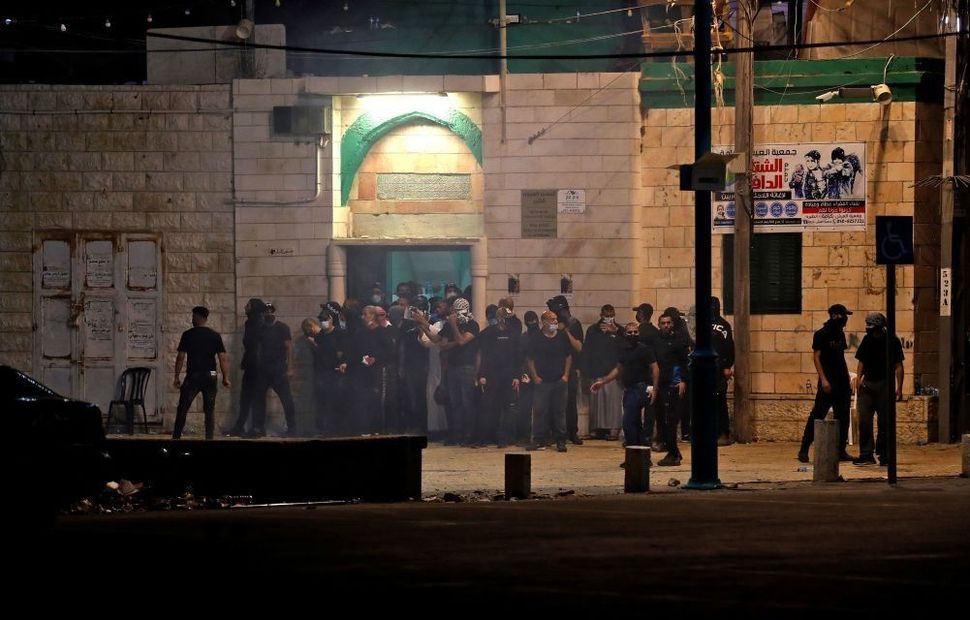 Arab-Israelis gather outside a mosque in the mixed Jewish-Arab city of Lod on May 13, 2021, to protect it from attacks by Israeli far-right extremist.

While far too much in the latest escalation between Israel and Gaza militants is tragically familiar, the new and in many ways most frightening aspect is the internal Arab-Jewish violence plaguing Israel’s so-called mixed cities that many have worried could spiral into a civil war.

Arab rioters have torched synagogues and Jewish-owned businesses. Mobs of extremist Jews have beaten Arab citizens nearly to death and vandalized their homes, shops and cars. On Monday, Yigal Yehoshua, a 56-year-old Jewish resident of Lod, died from injuries he sustained when Arabs tried to avenge the fatal shooting of Moussa Hassouna, also from Lod.

The locus of the horrific clashes has been Lod, the working-class town near Ben Gurion International Airport that has Biblical roots and its own awful modern history: virtually all of its Arab residents were expelled by Israeli forces during the 1948 war, hundreds killed in the process. But the racist riots have spread also to Acre, Jaffa, Ramle and even Haifa, long heralded as a model of coexistence. It is by far the worst internal violence since the events of October 2000, when a series of demonstrations led to the deaths of a dozen Arab and one Jewish Israeli citizen.

This outbreak disrupted what had smelled like progress. Negotiations were underway that, for the first time, might have led to an Israeli governing coalition including Arab lawmakers. The coronavirus pandemic, while exposing inequalities between Jewish and Arab areas, had also showcased Arab leadership in health-care. 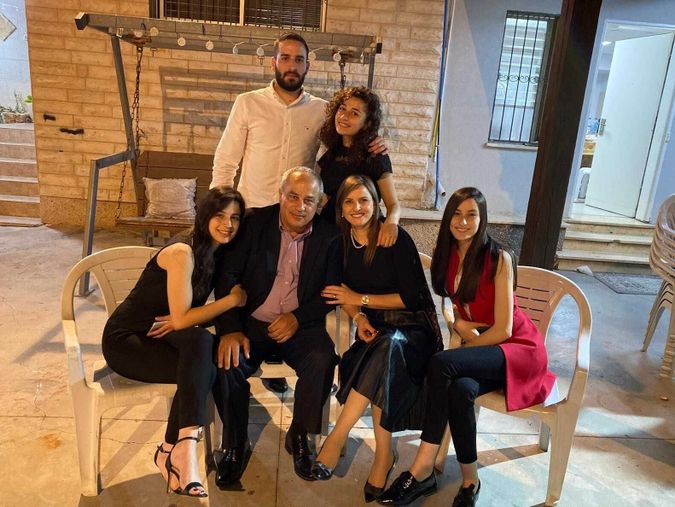 Just over a month ago, the Forward partnered with my synagogue, Temple Ner Tamid of Bloomfield, N.J., to host a Zoom conversation with Mohammad Darawshe, a leader of the coexistence group Givat Haviva who ran a failed campaign for the Knesset this spring for a new party called Ma’an, Arabic for “together.” Darawshe has four children, ages 18, 19, 25 and 26, who comprise the 28th generation of his family to grow up in Iksal, a Muslim village of about 15,000 — half Darawshe kin — outside of Nazareth.

During that April 11 conversation, Darawshe was both optimistic and realistic. One thing that stuck with me a Givat Haviva project that has put hundreds of Arab teachers into Jewish schools, giving students there alternate images of Palestinians from the ones they too often see on the news.

I have wondered all week what the internal violence had done to Darawshe’s sober hope, so I called him on Monday morning. When I asked how he was holding up, he said: “Barely.”

Excerpts of our conversation are below, edited for clarity and length.

Inside Iksal, Darawshe said, things had been mostly calm, though about 10 kids were arrested for throwing stones at the police station the other night, But in his household of six, three had had “interactions with mobs, Jewish mobs,” Darwashe told me, “that luckily ended without being injured.”

The first came on Wednesday, when he was driving to Afula, about 15 minutes away, to visit a friend in the hospital with heart problems.

I was personally stopped, they were asking if I’m Jewish or Arab. It’s gangsters with kippah on their heads, They stop cars in areas that they know Arabs’ cars would be passing. So if you’re an Arab, you can get beaten. They ask you, ‘Jewish? Arab? Arab, Arab, Arab.’

I said ‘Jewish.’ I want to escape — that’s the only way to escape. If I would say ‘Arab,’ I would get punched in the face through the window. You would get pulled out of the car, you would be in the middle of hundreds of fists on the ground, and God knows what would happen to you. If you put on gas and move on, you would probably get a stone in the window.

I haven’t been to Afula since. And I wouldn’t let my kids go or my wife go. I wouldn’t volunteer myself as a victim in Afula or in any Jewish town. I’m changing routes, I’m not going to the same roads. I delay things, hoping things will calm down, maybe a couple weeks. You don’t need to go and meet danger in the face.”

Darawshe’s eldest is the manager of a pharmacy in a town he asked me not to name for his son’s safety. He said that on Thursday, about five young men came and asked the guard if there were any Arab employees of the pharmacy. “The guard said no,” he told me. “Luckily there was an armed guard, Jewish guy, that prevented them from going into the pharmacy.”

That same day, he said, his daughter, who studies genetics at the Technion-Israel Institute of Technology in Tel Aviv, was stopped by a security guard, who said if it was up to him he would not let her onto campus. “She ignored him, showed him her card, went to her lab and finished her day.

This is the tip of the ice. Between my village and Afula there is a six-mile gap. In mixed cities, it could be only six yards. So you can’t have that kind of choice, to avoid passing through people’s neighborhoods. Sometimes it’s even the same apartment building.

Most of the events are not between Jewish and Arab residents of the same neighborhoods. Mostly they are between mobs that are imported from Jewish settlements in the West Bank to come and ignite the fire. The Arab mobs are from the towns themselves. The Jewish residents are ignited by mostly outside Jews.

I tell them we need to have red lines. There is a red line of not harming innocent civilians. If you want to go out and demonstrate against the police, OK, but innocent individuals, humans, neighbors, residents, civilians — it’s not acceptable and it’s a red line that you cannot do it.

There is plenty of blame to go around, but Darawshe puts it squarely on Prime Minister Benjamin Netanyahu, whose push a couple of years ago for the nation-state law, which firmly prioritized Israel’s Jewishness over its democratic nature, he sees as one of the worst things to happen to Arab citizens.

He noted that amid the escalation between the Israeli military and Palestinian militants in the Gaza Strip, and the accompanying internal Arab-Jewish violence, the right-wing religious Zionist leader Naftali Bennett and Mansour Abbas, an Arab lawmaker, have both pulled out of talks to form an anti-Netanyahu coalition.

All of what is going on is orchestrated, maybe not to the detail, but it’s orchestrated by Benjamin Netanyahu to try to prevent an alternative coalition that could send him home and oust him from government.

Mansour Abbas, his last move — yesterday, going to Lod and meeting with the mayor and going to visit one of the burnt synagogues — is trying to get some kind of empathy to go into a right-wing coalition.

Darawshe was worried about Arab leadership’s call for a general strike of Arab-Israeli workers on Tuesday. But he was comforted by the publication over the weekend of several statements in support of calm and cooperation signed by Jewish and Arab business and civil-society leaders.

It’s a scene I haven’t seen before. Hundreds of the biggest Jewish corporations. They asked me to put my name on it last Thursday and I did.

This time, the wound is much much deeper than before.

Luckily, we have a short memory, and maybe the memory of people in Israel, Jews and Arabs, is shorter than the memory of other nations around the world. That’s the blessing we have in the holy land.

It’s not enough, those petitions are not enough. There’s a lot of work cut out for us, for the day after. The work of Givat Haviva and other civil-society organizations need to double 20 times more over the next 10 years. The damage that is done is severe. We were at the edge of a civil war,

Before we hung up, I asked again about his kids. Two of them were not alive in October 2000, the other two were too young to understand. How were they processing all this?

First of all they are afraid, afraid of going out. They are concerned and worried about what will happen next week, what’s going to be the atmosphere in the university.

All of them felt the need to go and demonstrate, all of them participated in demonstrations more than once. They’re angry about what the government is doing. They feel and see a double standard in the police treatment of demonstrators.

They hug Jewish demonstrators even though they may have weapons pointed at Arabs, and the police are very harsh with Arab demonstrators. They’re treated as terrorists, as the prime minister said, and not as citizens who have the right to, one, worship, and two, to express their disappointment in the government.

They should continue to go and express their voice. And at the same time, they should be careful.