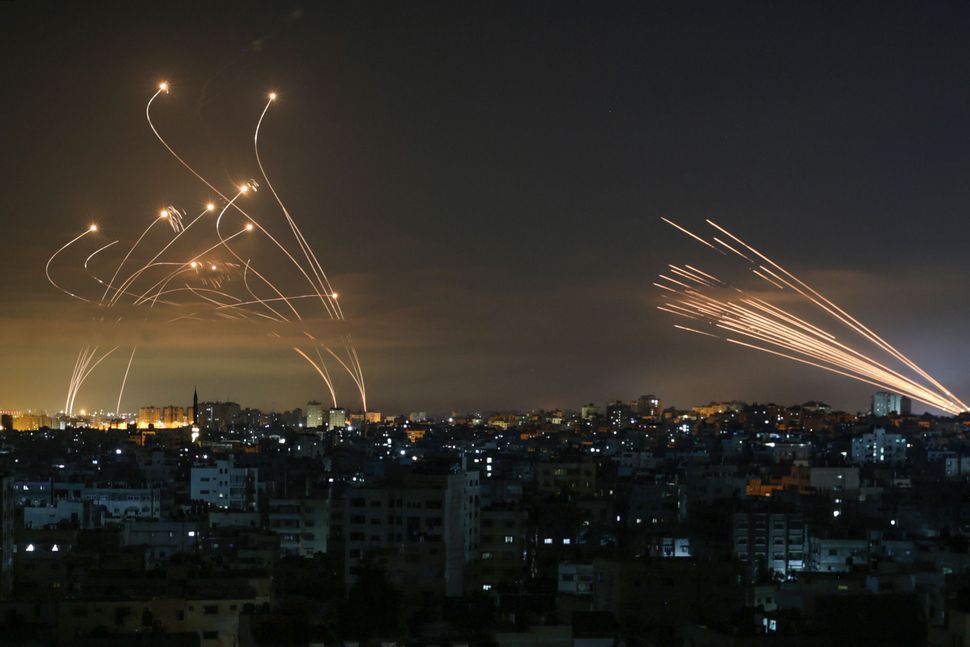 Rockets are seen in the night sky fired between Israel and Beit Lahia in the northern Gaza Strip on May 14, 2021. By Anas Baba / AFP via Getty Images

I made a lentil soup on Sunday as I was recovering from the chills and aches that followed my second shot of the COVID vaccine. It was the recipe I always use — onions, garlic, carrots, lentils, cumin — but my daughter, Shayna, insisted it was the best I’d ever made. We had it for lunch twice during the week, and as we sipped the soup she asked the impossible questions about the spiraling violence in Israel and Gaza.

If Hamas knows the Iron Dome will block most of the rockets, and that Israel will respond with airstrikes that kill many more people why does it keep sending them? she asked on Tuesday. Two days later, it was: Do you think the Israeli-Palestinian conflict will end during my lifetime — or will the sun explode first?

She is 13. Yet these are the smart, if unanswerable, questions underlying all others about the situation.

I was the Jerusalem bureau chief of The New York Times during the last two Israel-Gaza wars, in 2012 and 2014, so I’m supposed to have some answers. As with the lentil soup, so many of the ingredients to this new conflagration have been in the simmering pot before.

A fight over the planned evictions of Palestinian families from their homes in the East Jerusalem neighborhood of Sheikh Jarrah. Clashes between Israeli police and Muslim worshippers around the Temple Mount/Al Aqsa compound. The lopsided air exchange that terrorizes Israelis by keeping them running to bomb shelters at every red alert, and sends far too many Gazans to hospitals and morgues.

There did seem to be something different in the soup this time.

The 2021 calendar was particularly cruel: the Muslim holy month of Ramadan, which rotates on a lunar cycle, coincided with a string of nationalist Israeli holidays in April and May. Meanwhile, Palestinians were incensed that their first national elections in 15 years were indefinitely postponed; Israeli politics were in hopeless stalemate after four elections in two years failed to produce a clear mandate; and the Biden Administration was trying to back-burner the region to focus on domestic issues.

And then a shocking new ingredient: horrible violence between Arab and Jewish citizens inside Israel’s mixed cities that Prime Minister Benjamin Netanyahu called “lynchings” and many said threatened a civil war.

When I speak publicly about my time covering the conflict, I often play a little game with audiences, asking what “started” the 2012 or 2014 Gaza wars.

Usually someone will say, referring to the 2014 round, that it was the kidnapping and murder of three Israeli students trying to hitchhike home from their yeshivas in the occupied West Bank; or regarding 2012, an attack before the air battle by Gaza militants on an Israeli patrol Jeep. Then I or someone else in the audience will point out that two days before the Jeep  attack, Israeli soldiers killed a 13-year-old boy in Gaza, or that eight days before the 2014 kidnapping, Israel announced a rash of new West Bank settlements in response to the Palestinians having formed a government that included Hamas.

We work our way backwards until someone mentions 1967, when Israeli paratroopers gained control of the Western Wall and the Temple Mount, and what was supposed to be a temporary military occupation of the West Bank and Gaza began. And then 1948. Maybe the deadly weeklong Arab riots of 1929 over, yes, access to the Old City’s holy places, pretty much the same fight we saw unfold on Monday.

I offer a weak joke, about how sometimes I feel like everything I write about the conflict should include as part of the background paragraphs, “Abraham had two sons: there was Isaac, and there was Ishmael.”

As I write this, Israel has stepped up its assault on Gaza, adding artillery shelling to the airstrikes, with ground forces poised to enter the territory, as they did in 2014. Israel had counted 1,800 rockets from Gaza this week, a far more intense barrage than prior rounds.

The Biden administration has sent an emissary to the region, joining Egypt and Qatar in hopes of brokering a ceasefire. Negotiations for a so-called “unity government” to replace Netanyahu appear to have fallen apart.

Netanyahu said in a statement Friday that the military operation “will continue as long as it takes to restore peace and security to Israel.” Two days earlier, the Hamas leader Ismail Haniyeh said “the confrontation with the enemy is open-ended.” At least seven Israelis and more than 100 Gazans have been killed.

Meanwhile, the propaganda war on social media is filled with disinformation and one-sided storylines. And in Lod, the locus of the internal violence plaguing Israel’s Arab-Jewish cities, gangs of right-wing Jews once again set Arab businesses aflame overnight.

I wish I could say that my experience on the ground in 2012 and 2014 gave me confidence about what will happen next. But like a lentil soup, even the same ingredients can come together differently each time.

What I can say confidently is that no resolution to this conflict will come from looking backwards. The clashing narratives cannot be reconciled, and they are so embedded in each side’s identity, that debating them is futile. It does not, actually, help to examine what specifically started this conflagration, or the one before or the one before that, because it does, in so many ways, end up at “Abraham had two sons: there was Isaac, and there was Ishmael.”

If there is any hope of ending the conflict in my daughter’s lifetime — or, as she would put it, before the sun explodes — it requires Palestinians and Israeli Jews to either acknowledge each other’s versions of history without trying to determine which is more legitimate, or to just ignore them.

The only possible peace agreement is one that looks forward.