‘Let’s all get together:’ A backstory on this weekend’s online Shabbaton for Jews of Color 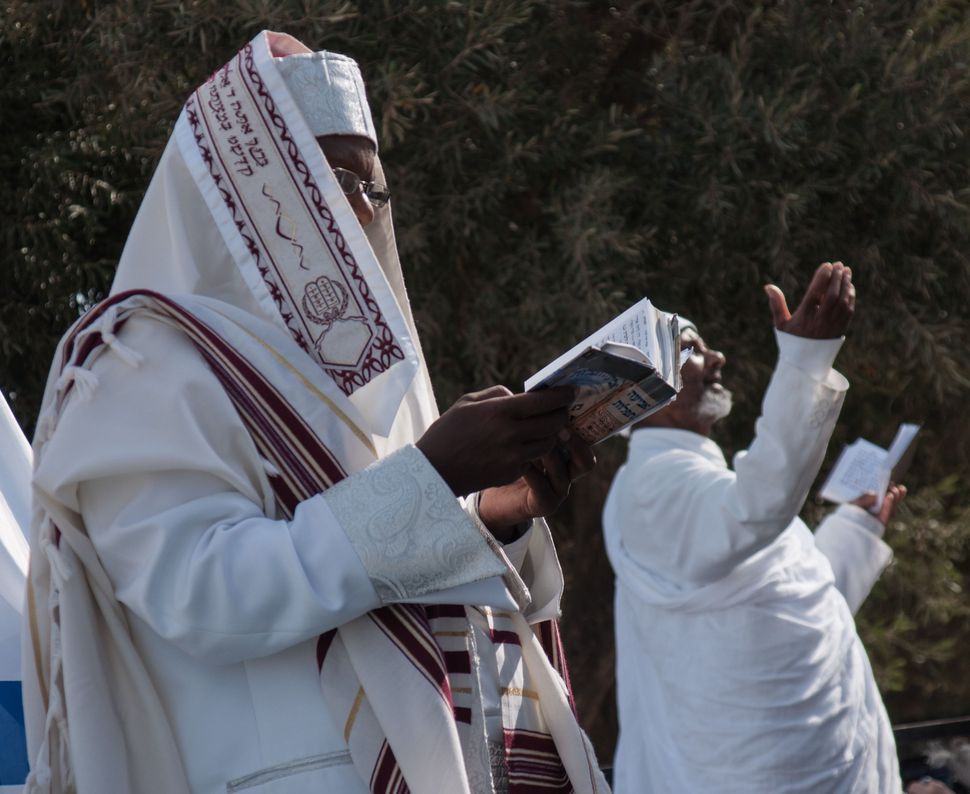 In suburban Boston during the 1990s, I once caught a glimpse of a Black man wearing a kippah as he exited a shop next to my daughter’s gymnastics class. After dropping her off, I doubled-back to approach him gingerly.

Or maybe not so gingerly.

“Hey you!” I yelled — startling him, but beginning what Rick Blaine and Captain Renault would call a beautiful friendship.

These days, meeting other Jews of Color is considerably easier, as Harriette Wimms, a Baltimore psychologist, discovered shortly before the pandemic last year. It happened when she attended a talk in her town by Ilana Kaufman, executive director of the Jews of Color Initiative, in what was more typically a less-than-diverse Jewish space.

“I was sitting in the front row,” Wimms recalled. “I turned around and I saw more Jews of Color than I had ever seen before.”

Another attendee, equally impressed, remarked: “I can’t believe I’m seeing you all for the first time. We’re family. Let’s all get together.”

Wimms took that to heart, and largely at her doing, that get-together will happen online this weekend as the National Jews of Color Shabbaton 2021. It’s hosted by the Jews of Color Mishpacha Project, an initiative spearheaded by Wimms as “a hub of learning, convening, and growth for JOC individuals, communities, and Jewish institutions.” It’s funded in part by the Jews of Color Initiative.

“It started as a Facebook post,” Wimms said. “JOC leaders across the country wrote back with a resounding yes.”

Running Friday through Sunday, the Shabbaton is far more than an online Shabbat service — though that part of the program is more challenging than it may sound; back to that in a bit. There are workshops by rock star Jews of Color, including Michael Twitty of “The Cooking Gene” fame, and Rabbi Sandra Lawson, who recently added the title of racial diversity, equity and inclusion director for Reconstructing Judaism to her many other first-and-only distinctions.

Other activities include sessions for youth and families, one on essence and spirituality, and another “for our white-skinned allies focused on antiracist work in Jewish spaces,” Wimms explains. The final day will host a recognition of trailblazers and elders in the Jews of Color community.

If the idea of a community of Jews of Color — or more specifically, various different colors that Black, Asian, Native American and Hispanic Jews come in — appears novel, it’s not, especially in the online world. As noted in the latest Pew study released this week, at least 8% of American Jews (and 15% of those 18 to 29) identify as something other than white, and there are others who have watched the population trends over the years, such as the Jews of Color Initiative’s Kaufman, who say the number is much higher.

So it’s not surprising that there are Facebook groups galore and others that meet both online and in person, such as Jews in All Hues, the Multiracial Jewish Network and the San Francisco-based Be’chol Lashon, which convened an annual weekend gathering of Jews of Color from around the world between 2002 and 2013.

That created a special challenge: how to accommodate the Shabbat needs and preferences for a crowd from different denominations and with wildly different ritual observances.

“We decided that a men’s section, a women’s section, and a mixed section would be most appropriate,” recalled Diane Tobin, Be’chol Lashon’s founder and its executive director until her retirement last year.

“But, as was the norm, my plan was foiled almost immediately by a woman who sat in the men’s section. I approached her and she explained that she was triggered by what she perceived as separate seating. She explained feeling like it was the ‘back of the bus,’ or unfair treatment limiting her free rights.”

That attendee was acclaimed children’s book author and classics professor Carolivia Herron, who also plans on participating in the Shabbaton.

“I was shocked. I guess I’m just used to the Conservative way,” recalled Herron, who teaches at Howard University in Washington. Her solution, she said, was to sit in another room to avoid keeping others from worshipping — although the experience left her debating whether or not to continue attending the annual event.

She did, and in subsequent years, Be’chol Lashon’s liturgical arrangements worked themselves out, mostly through friendships formed among attendees and the rabbis leading the services.

The JOC Shabbaton is banking on similar relationships from the start to quell any interdenominational disagreements. To begin with, Wimms and other planners have scheduled off-line activities for Orthodox attendees who won’t be participating in services on Shabbat.

Then there are the prayer leaders.

“I’ve been in interdenominational spaces for a decade. Nothing about it is simple, but it’s brave,” says Rabbi Isaiah Rothstein, who is co-leading the services with Koach Baruch Frazier, a Reconstructionist rabbinical student, and Rabbi Shais Rishon, who is Orthodox.

If you’re wondering about Rothstein’s denomination, he answers: “I’m millennial.”

When pressed, Rothstein said that he follows “the traditional approach of Jewish law from an Orthodox perspective,” though not in the same way as Rishon.

“All three of us are so different,” he explained. “We do have a lot in common. We share a deep love for the Jewish people.”

“There is a tremendous amount of wisdom among Jews of Color in the U.S. and we want to learn from each other and gain strength from each other that we can then bring back to our broader communities,” she states.

All of which can be easily accomplished in a weekend online — and much easier than chasing down a man wearing a yarmulke on the street.

Registration and other information about the Jews of Color National Shabbaton 2021 and Mishpacha Project may be found here.

‘Let’s all get together:’ A backstory on this weekend’s online Shabbaton for Jews of Color