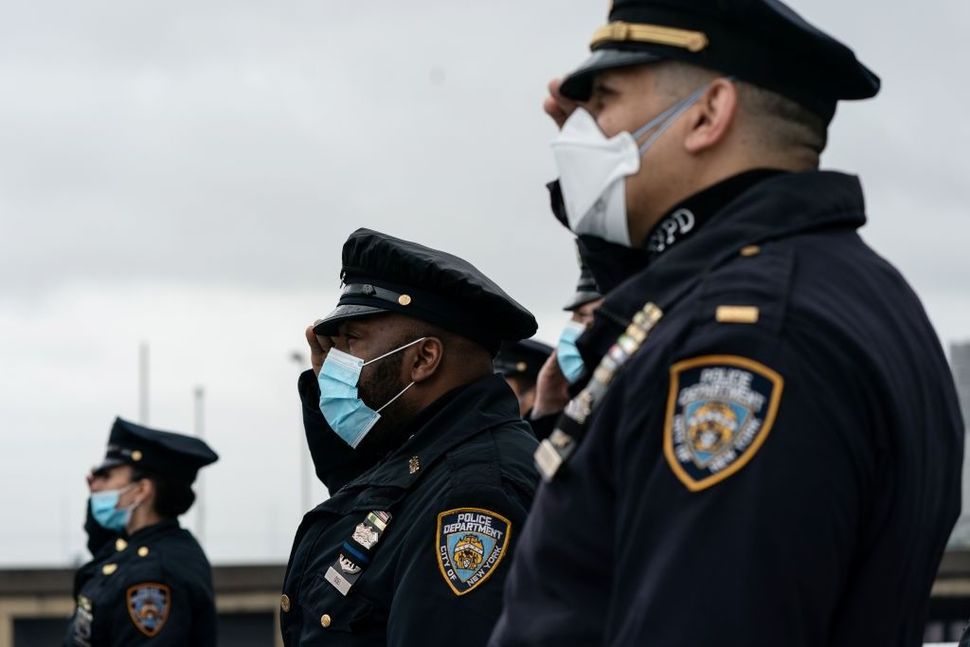 Members of the NYPD salute the USNS Naval Hospital Ship Comfort as it departs Manhattan’s West Side to return to Naval Station Norfolk in Virginia on April 30, 2020 in New York City. By Jeenah Moon/Getty Images

When my friends ask me what it’s like to be a cop, I typically give them the standard “living the dream” line that most of us use — for me, it truly is a dream job.

When my Jewish friends ask, I reply with a more niche answer. I tell them to imagine posting a photo on social media in which you happen to be wearing a Star of David necklace, identifying you as a Jew. And imagine that on this post, hundreds of anti-Israel comments flood in from strangers, holding you responsible for the decisions of a government thousands of miles away.

It’s the same thing for cops. Any time an incident involving police occurs across the country, my experience has been that people being stopped by the police are more aggressive.

The flames of hatred toward Jews and police officers may seem dissimilar on the surface, but they are both constantly being stoked for cheap political points.

Recently, the New York Post published a piece comparing how certain politicians wrote about cops over the past couple of years versus right after Officer Jason Rivera was killed. On Jan. 2, for example, City Councilwoman Kristin Richardson Jordan tweeted, “The NYPD is still the biggest gang in New York City.” Weeks later? “I am saddened; a loss of one is a loss to the whole, as it creates ripples and ripples of pain. I stand with the families of the fallen.”

I invite you to head over to Twitter, type in “police,” and see how viciously we’re often described.

As for Jews, we’ve long been the world’s scapegoat for every possible problem. We’ve been accused of having space lasers, training assassin dolphins, and now of being behind the coronavirus pandemic. Antisemitic attacks are on the rise, and antisemitism is only getting worse, not better.

After eight years of policing in New York City, I am no stranger to the attacks on police officers. Once, a man I stopped for jumping the turnstile decided he wanted to push me toward the subway tracks, causing me to herniate a disc while I wrestled him to the ground. His reason for the fight? I was going to make him late for work. I wasn’t planning on arresting him, or even issuing him a citation, yet a fight broke out anyway.

This happened early in my career, and I stuck around for four more years. The almost weekly attacks on my colleagues both locally and on a national scale, coupled with the rise of attacks on Jews in the city, led me to move down to Texas in March of 2021, where I continue to serve as a police officer (and where my family can protect themselves in a pro-Second Amendment state).

The transition from working in the largest police force in the United States to working down South has been easier than I imagined it would be. I went through a second police academy, graduated second in my class and gave our commencement speech. I think I may have been the first police cadet in history to quote both Dr. Martin Luther King and the Lubavitcher Rebbe in his speech.

When I moved to Texas, I took a pay cut and gave up eight years seniority in the NYPD.

But it was worth it: I thought I had escaped the violence toward Jews and cops that I faced in New York City, and was glad to move somewhere generally pro-police, and in a state that empowers civilians to defend themselves should the need arise.

Then last Saturday, on our holy Sabbath day, Jews a few hours away from me were attacked. A man convinced that Jews control everything held the rabbi and three congregants hostage for 11 hours at Congregation Beth Israel in Colleyville, Texas. My social media feeds have been filled with murdered cops as well as traumatized Jews all week long.

As a regular community member, not as a cop, I feel that my family and I are safer though. Nonetheless, I find it interesting that similar to the national firearms discussion, I see the same divide within the Jewish community where some are really for it and others are very much against. I would expect after our collective history of being persecuted, we would have more Jews embracing self protection and being more vocal about the need to support such choices.

What I need, as a Jew and a cop, is for the silent majority to no longer be silent. It’s time each and every one of us start holding all segments of the justice system accountable. We don’t need new laws — we need our current laws to be enforced. Big cities across America have enacted one form or another of bail reform, which sounds great on paper, but ends up leaving dangerous people free to harm more people.

This past month, newly elected Manhattan District Attorney Alvin Bragg sent a memorandum directing his office not to seek jail time for those who commit certain assaults and robberies, and not to prosecute those charged with resisting arrest. The message becomes clear to the wrongdoers of our society: commit a crime and you’ll just get a slap on the wrist.

We have already seen the deadly consequences of this attitude. This week alone in New York City, Officers Jason Rivera and Wilbert Mora lost their lives while responding to a domestic disturbance. In Houston, Corporal Charles Galloway was shot and killed while conducting a traffic stop. I heard the very gunshots that took his life; I was assisting in an unrelated investigation a few blocks away.

Holding people accountable for their actions should be a bipartisan issue, and yet here we are in 2022, looking at a justice system playing politics while saying “never again” for the hundredth time. Thoughts and prayers are nice, but they don’t stop Jews from being attacked and cops from being murdered. Where is the thoughts and prayers brigade before worshippers in a Texas synagogue are taken hostage? Where are they before an officer dies in the line of duty?

In 2014, Tyrone Howard — a man with 20 prior arrests, including for violent crimes — was ordered by a judge to sign up for a drug rehabilitation program instead of serving time in jail after being taken down in a drug bust. Rather than rehabilitate, he was involved in a shooting and skipped his court dates, which generated an arrest warrant. In 2015, he met NYPD Officer Randolph Holder and decided he would rather murder him than face jail time.

Some may hate me for being Jewish, some may hate me for being a cop. I know it’s not everyone, and I’m not looking to be loved and adored like firemen. At the end of the day, I’m still a proud Jew who carries his gun off-duty to synagogue services. Luckily, I’m in a community that has taken “never again” to heart, and in my synagogue you don’t have to be a cop to bring protection with you.

I pray we as a nation find a way to come together when the world wants us to be more divided than ever.

Jacob Novikov is an Orthodox Jew and police officer in Texas. His writing reflects his personal opinion and does not represent the views of any current or past employer.