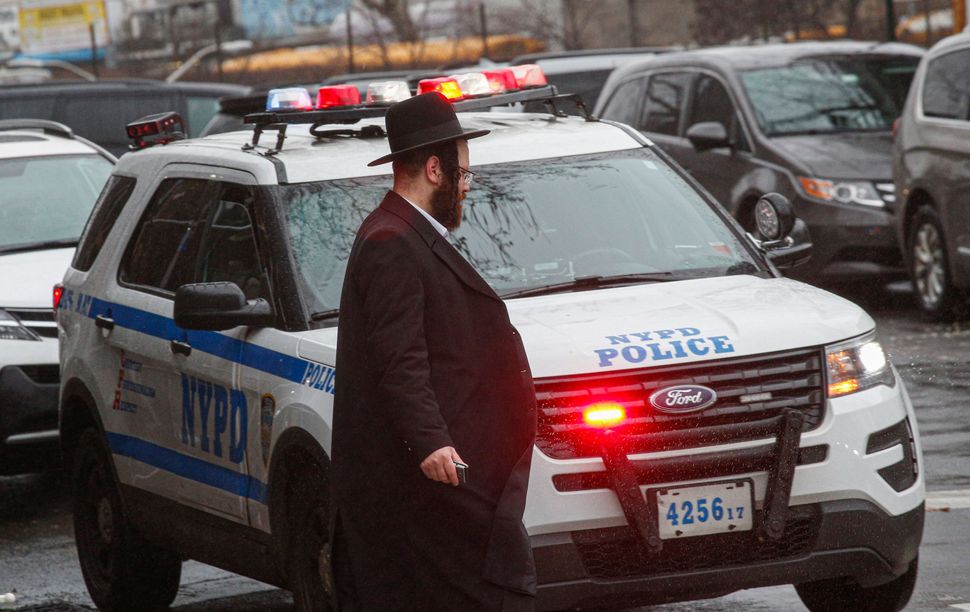 A NYPD car patrols in South Williamsburg, Brooklyn on December 30, 2019 in New York City, two days after an intruder wounded five people at a rabbi’s house in Monsey, New York during a gathering to celebrate the Jewish festival of Hanukkah. Image by KENA BETANCUR/AFP via Getty Images

The “No Hate, No Fear” march in New York on Sunday saw tens of thousands of Jews united against anti-Semitism – but divided over the proper response from the government.

In Brooklyn neighborhoods that have seen frequent anti-Semitic assaults, many Jews are welcoming the increased presence of New York Police Department officers and New York State Police troopers outside synagogues and other Jewish institutions. Both some liberal Jews, as well as non-Jewish people of color in the neighborhoods, say the police will cause more trouble than they’ll solve.

Geoffrey Davis, an African-American community activist in Crown Heights who frequently works with local Jewish leaders, said that more police would lead to innocent young black men getting profiled, with little likelihood of stopping any assailants. “More police presence – what does it do?” he asked. “More cameras? The attackers could care less about cameras. Now you just see the punching on camera.”

Over the past few weeks, many New York-based progressive Jewish organizations and media outlets have pushed back against the idea that more police will help.

It even came up at the rally – a left-wing group called Outlive Them NYC brought a contingent that they called “Care Not Cops.”

We know we cannot rely on police to keep our people safe.
We know racism is rampant in the NYPD.
We know our neighbors are not our enemies.
We know antisemitism is real, and it’s propagated from the top down.

Jews for Racial and Economic Justice, the New York progressive Jewish organization, also took a similar stand, as did the left-wing magazines Jewish Currents and Jacobin.

“Bringing more police into communities of color, where there are also largely more white Jews living alongside black people, is going to overcriminalize — continue to overcriminalize that community,” JFREJ executive director Audrey Sasson said in an interview late last month with “Democracy Now!” “And we think that that will actually reduce our security and our safety.”

But Yaacov Behrman, an Orthodox Jew from Crown Heights who sits on the local Community Board, said that people who don’t have to live with the consequences of violent anti-Semitism are the source of that kind of rhetoric.

“If you don’t live in Crown Heights, in a neighborhood that’s under attack, mind your own business,” he said. (Outlive Them and JFREJ did not respond to interview requests by deadline)

Behrman, who spoke in a personal capacity, said that he wasn’t hearing such anti-policing rhetoric from African-American leaders he knows.

But Davis said that besides more practical problems – he said the neighborhood was simply too big for officers to catch every assailant in the act – there were symbolic issues as well. The increased police presence in response to anti-Semitism, in contrast to the lack of similar reaction after other types of local violence, was causing some people of color to think that “Jews get more service than blacks,” he said, noting that this is a widely-held, though inaccurate, belief that caused distrust in the community.

Yossi Stern, the retired former director of the volunteer patrol group Crown Heights Shmira, agreed that some of those feelings were valid – “I would be upset if my community didn’t get the same attention,” he said.

But, he added, just because black-police relationships were complicated doesn’t mean that Jews shouldn’t feel safe. “They need to invest that money and energy into fighting crime – it protects all people,” he said. “It protects the blacks and the Jews.”

One problem, he said: The increased police presence was only going to be temporary. Indeed, similar NYPD buildups over the past two years in response to anti-Semitism have only lasted a few weeks before patrols went back to normal.

Regardless of their stance on police buildup, everyone agreed that more education and coexistence programs were needed – bringing black and Jewish children together to help the two groups understand their differences and fear each other less.

“They need a community effort,” said Davis. “The politicians have to get the programs going, and not wait for a terrible tragedy.”

“It’s as if you have a flood in the house, and instead of fixing the flood you put towels on the floor,” he said. “Eventually you run out of towels and the house is flooded.”