Conspiracy theories are at the root of anti-Jewish violence 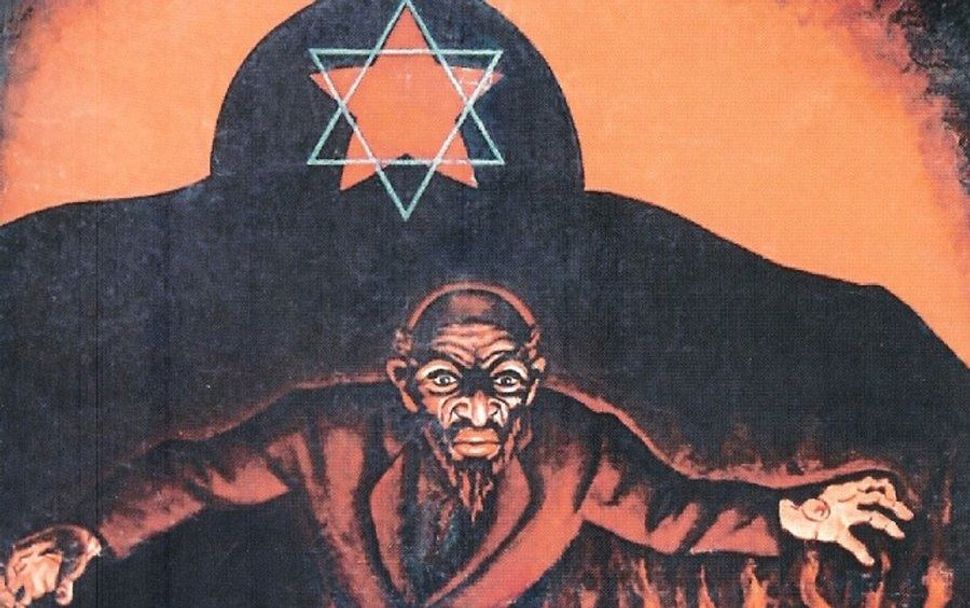 Detail from a Polish antisemitic propaganda poster, circa 1920. Courtesy of Wikimedia Commons

In the days that followed the hostage crisis at the Beth Israel synagogue in Colleyville, TX, reports came out about how the hostage-taker repeatedly espoused antisemitic conspiracy theories, believing that Jews could exert their power and sway over the U.S. government to free an imprisoned Al Qaeda terrorist.

These revelations are likely surprising to many, considering that Jews are a tiny minority in this country and, as most Americans know, do not exert control over the U.S. government. American Jews are proud to live and contribute to a democracy where everyone has a voice.

Still, this notion of Jewish control of government has remained a staple of antisemitic conspiracy theories on the internet and, in certain countries, such as Pakistan, where the gunman and the terrorist he claimed to be acting on behalf of have roots, these antisemitic conspiracies have in recent years taken on a life of their own.

The myth of Jewish control is indeed thousands of years old, and yet is still very much alive and well and being used to blame world events on Jews, whether it is the spread of the coronavirus, the suffering of certain economies, or the imprisonment of an Al Qaeda terrorist. In the past few years, with the rise in antisemitism in the U.S. and around the world, antisemitic conspiracy theories often have been at the root of violent attacks against Jews.

As an organization committed not only to combating antisemitism but also to working against all forms of hate, ADL strives to identify the commonalities of prejudice. Factors such as stereotyping, discrimination and treating the person as the “other” all contribute to antisemitism, and other forms of prejudice. At the same time, in certain circles, there is a resistance to the reality or significance of antisemitism. “Look how well Jews are doing,” some may say. “They are part of the white establishment, not a truly discriminated-against minority.”

Let’s be clear. Life in America for the last half century has been good for Jews and progress against antisemitism has been significant. In recent years, however, as the statistics indicate, antisemitic incidents have been surging and there is a new level of insecurity in the Jewish community.

At its core, antisemitism is fundamentally different from other types of hate:. While stereotyping, discrimination and otherizing all contribute to antisemitism, the core of antisemitism is the notion of poisonous and secretive Jewish power and control.

That is why Jews are the main targets of conspiracy theories, as we’ve seen during the ongoing coronavirus pandemic. The most pernicious and influential antisemitic document over the years is the Protocols of the Elders of Zion, which fraudulently claims to be the secret plans of Jews to take over the world. That is why the State of Israel, the sole Jewish nation, is so often singled out for conspiracies about evil power.

And that is why sometimes, as in the case of the Pittsburgh Tree of Life synagogue shooter, the individual clearly stated his belief that Jews control everything to the detriment of society. The same appears to be true about the Texas synagogue hostage taker, who also borrowed a page from the Protocols.

“This was somebody who literally thought that Jews control the world,” Rabbi Charlie Cytron-Walker said of the terrorist who interrupted his shabbat services with the click of a handgun. “He thought he could come into a synagogue, and we could get on the phone with the ‘Chief Rabbi of America’ and he would get what he needed.”

It seems the Texas terrorist chose to go to a synagogue on the holiest day of the Jewish week, knowing Jews would be there worshipping, and believing the Jewish community had the “power” to release convicted terrorist Aafia Siddiqui from a U.S. prison. He appears to have thought that Jews control government and taking Jews hostage could lead to the U.S. government overturning the conviction of convicted terrorist Aafia Siddiqui.

He might have also been thinking that Jews control the media, and therefore, that going into a synagogue on Shabbat would provide the attention to Siddiqui’s cause that nothing else could achieve.

While we may never fully understand the Texas hostage taker’s thinking, unlike the Pittsburgh murderer who left a long manifesto, the evidence we have points to his motivation being rooted in a deep-seeded belief in age-old antisemitic conspiracy theories.

The antisemitic incidents targeting Jews at prayer in Pittsburgh, Poway and Colleyville, Texas should all remind us of the two unique critical elements about antisemitism that explain many anomalies about this form of hatred: its lethality, its durability; its pervasiveness, its contradictions.

Our task is to stand up against it no matter its source.

Conspiracy theories are at the root of anti-Jewish violence