We know what works in protecting synagogues. Now Congress needs to fund it 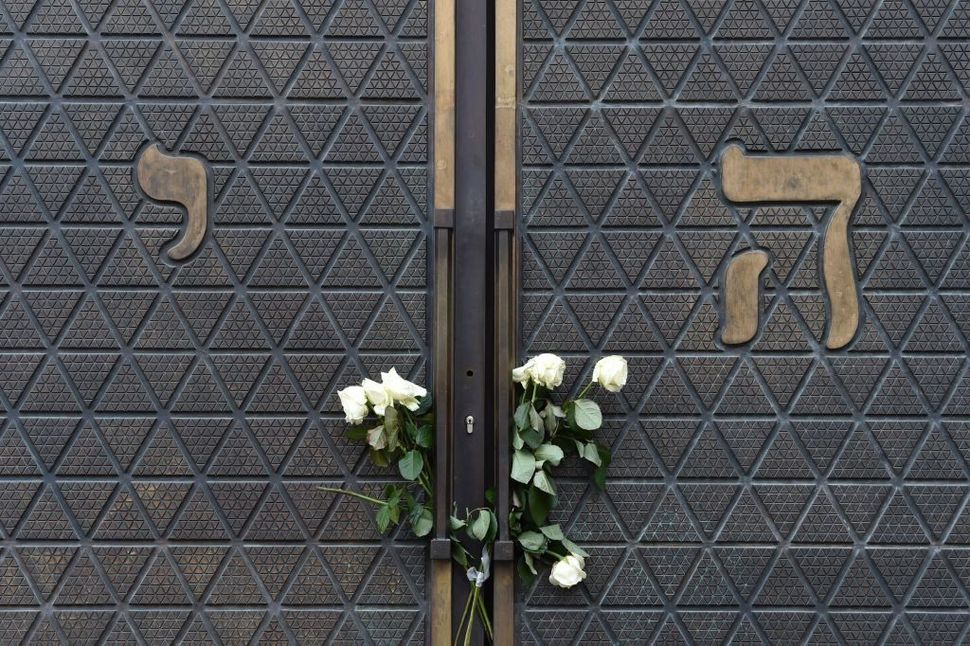 White roses have been attached to the entrance of the synagogue in Munich, during a protest against anti-Semitism on October 11, 2019 two days after a deadly shooting during an attack in Halle targeting a Turkish restaurant after an attempt at the synagogue. By Christof Stache/AFP via Getty Images

Antisemitic incidents in America have been on the rise in recent years, and 2022 is already off to a terrible start: a gunman took four people hostage inside a Texas synagogue, Jews have been physically attacked in the streets of Brooklyn, and several synagogues and other Jewish organizations across the country have received bomb threats.

In the face of this tidal wave of antisemitic hate, Congress and the Biden administration can — and must — respond with concrete steps that protect the Jewish community. This must include aggressively pressuring social media platforms to proactively thwart antisemites and promoting education that advances understanding of antisemitism.

Much of this can be addressed within the framework of the omnibus appropriations bill being negotiated right now with an eye toward passage in March — most importantly, dramatically increasing funding for the Department of Homeland Security’s Nonprofit Security Grant Program.

NSGP grants enable houses of worship, as well as other nonprofit organizations at risk of attacks, to make physical security improvements to their buildings and provide security trainings — such as the active shooter instruction that the rabbi of the Colleyville synagogue credited for his and his fellow hostages’ survival.

Last year, congregations submitted $400 million in NSGP grant applications, but more than half of applicants walked away empty-handed due to limited funding. By increasing the allocation for this program from $180 million to $360 million, Congress would better meet the level of demand.

Too many of our synagogues have contacted their local police departments requesting the deployment of an officer to protect them during Sabbath services, only to be told police “don’t have the resources” to do that.

The Department of Justice provides, annually, millions of dollars in grants to local law enforcement agencies for an array of targeted purposes. The DOJ has said that using these funds for protecting houses of worship is a “permissible” use, and Congress and the DOJ should collaborate to establish a grant stream specifically for this purpose so that no synagogue is without the police protection to which it’s entitled and so badly needs.

While increasing security funding is vital, stopping attacks before they start is existential. As long as social media platforms remain unchecked venues where antisemitic tropes can be pushed and proliferated to polarize and motivate people to act against Jews, attacks will continue.

Congress must act now to pass the bipartisan Platform Accountability and Transparency Act, which would bring us closer to compelling Facebook, Twitter, TikTok and other companies responsible for the hate that festers on their platforms.

This bill would compel those platforms to share data with university affiliated researchers or else lose the legal immunity (the companies greatly value) from those who would sue the platforms if they were somehow harmed as a result of a posting — be it slander or a call to violence — on the platform.

Only then will we begin to get real answers to how hateful advertising and posts spread online, laying the groundwork for greater accountability and more effective legislation.

Finally, Congress must foster a clearer understanding of antisemitism among the American public through expanded Holocaust education. One way to do this is to increase funding for the “Never Again Education Act,” which since its passage in 2020 has provided $10 million over five years to the U.S. Holocaust Memorial Museum to expand its educational programs.

The myriad antisemitic incidents within the first weeks of 2022 have generated national headlines about the current surge of antisemitism. But a moment in the spotlight is not enough: Congress and the administration can and must take concrete steps now to fight antisemitism so that American Jews may live in security and peace in this blessed nation.

We know what works in protecting synagogues. Now Congress needs to fund it