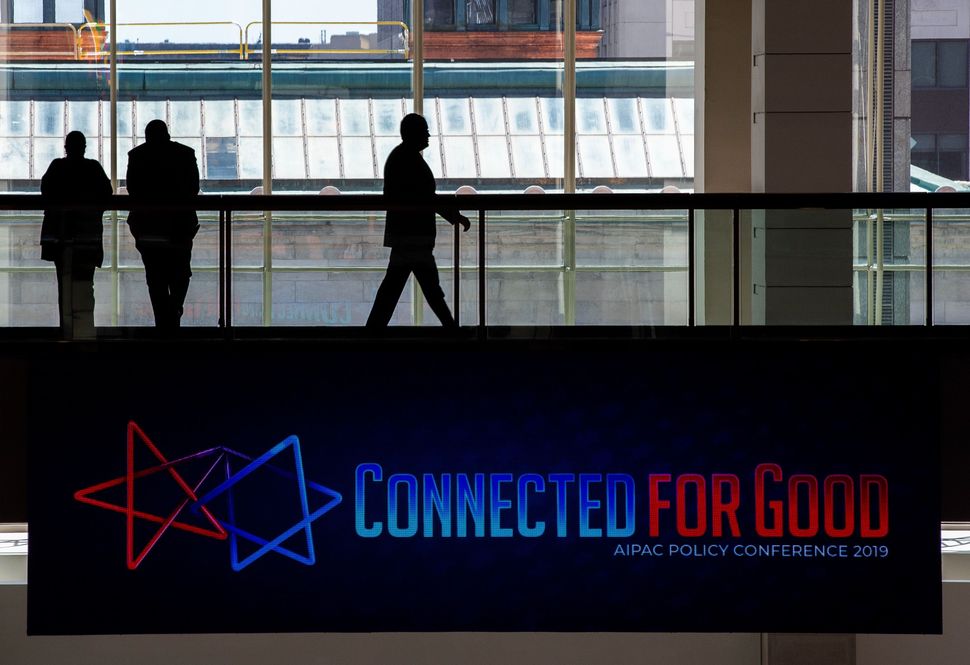 For pro-Israel Americans and the journalists who cover them, AIPAC Policy Conference was the annual see-and-be-seen event. More than 18,000 of us descended on Washington each March for three days of parties, panels, networking and a lobbying day on Capitol Hill. Top donors were treated to a blowout party with enough members of Congress to pass a bill.

The 2020 conference was the last major Jewish event before the pandemic shutdown. We didn’t know it at the time, but it was also AIPAC’s last Policy Conference.

COVID has provided AIPAC with a convenient excuse to discontinue its signature annual program without ever having to announce that it is doing so. But AIPAC has also shifted tactics in larger ways as well — in ways that may irreparably damage both the group and the U.S.-Israel relationship.

Instead of primarily lobbying members of Congress to support aid to Israel, the group has in recent years become more aggressive, running attack ads and email campaigns against politicians it deems too critical of Israel. AIPAC has also quietly gutted its outreach to progressive voters and dramatically scaled down its community and campus programs. In December and with much fanfare, it launched a controversial PAC and Super PAC, and has recently launched an app to quickly mobilize its rapidly growing membership.

Many longtime supporters and former AIPAC staff have been uncomfortable with these changes, which have alienated longtime allies in both parties while emboldening grifters who are actively undermining our democracy.

Some have speculated that AIPAC ended its Policy Conference because the polarization in our politics makes it impossible to run a truly bipartisan event. But while its true that many of the decisions made by AIPAC — and Israel — in recent years have alienated many on the left, the move in truth comes because AIPAC has decided that directly underwriting certain pro-Israel candidates is a more efficient use of resources than hosting educational events about the Jewish state and its relationship to Washington, or investing in relationships that may take decades to pay off.

They’re not wrong — at least not in the short-term. But their choice to endorse 37 members of Congress who voted to overturn the results of the 2020 election, and whose anti-democratic positions the vast majority of American Jews reject, harms the stability of our country — and could jeopardize the future of the U.S.-Israel relationship.

AIPAC has benefited tremendously from the fact that support for Israel is bipartisan. By encouraging AIPAC members to give directly to local pro-Israel candidates that align with their other values, AIPAC members managed to maintain strong relationships with Democratic and Republican lawmakers alike — and their first slate of endorsements is in some ways a testament to their bipartisan past.

AIPAC’s own supporters have long been a check on the organization’s single-minded focus of defending Israel. Most Americans — even those who give to AIPAC — are not single-issue voters, so members have historically supported the organization’s broad mandate of defending the U.S.-Israel relationship while also giving directly to individual campaigns selectively.

But now, supporting AIPAC financially means trusting the organization to pick which horses to back in every race. And so far, AIPAC’s leaders have made confusing choices with little or no explanation — and are using funds to support politicians whose response to the Jan. 6 insurrection was downright dangerous.

Unlike other lobbying groups that issue scorecards to show how they choose which candidates to endorse, AIPAC’s process for choosing candidates remains opaque. It would be helpful to understand how AIPAC defines pro-Israel.

Notably missing from the group’s first slate of endorsements are politicians who for years were keynote speakers at AIPAC conferences and have underwritten key pieces of pro-Israel legislation, such as New Jersey Senator and ranking member of the Senate Foreign Relations Committee Bob Menendez. Also absent from the list are high-profile pro-Israel Republicans challenging their party’s orthodoxy, such as Rep. Liz Cheney, who recently tweeted that AIPAC’s “leadership is playing a dangerous game of politics.”

Worse, of course, are the 37 representatives on the list who actively supported President Donald Trump’s efforts to delegitimize the 2020 election. Though weirdly, many pro-Israel politicians who also fall into this category — like Sen. Ted Cruz — are glaringly absent from the list.

There are plenty of choices that will alienate those on the other side of the aisle as well: despite spending millions lobbying against the 2015 Iran Deal, claiming that it would pose a tremendous threat to Israel, AIPAC’s first slate of endorsements also includes 27 Democrats who voted for the Iran Deal.

It’s one thing to host a wide swath of candidates at your annual event. It’s quite another to fund them while trying not to alienate your membership.

And it seems that AIPAC is already on the defensive. In a recent and astoundingly tone-deaf letter, AIPAC used President Volodymyr Zelenskyy’s impassioned plea for aid of Ukraine’s military struggle to defend these endorsements. (Ironically, some on the list voted against sending military aid to Ukraine.)

Lengthy @AIPAC defense for endorsing Republicans who voted against certifying elex for Biden: “We can never let the things that divide Americans politically determine whether the United States will support Israel. We must be willing to stand with those who stand with Israel.” pic.twitter.com/CJ0ulMDKdX

AIPAC’s letter was insulting in implying that the United States, a country whose lawmakers almost unanimously support pro-Israel legislation, would turn on Israel if not for AIPAC’s work. Its leadership doesn’t understand that their endorsements are much more likely to turn former supporters against AIPAC than against Israel.

AIPAC’s letter did get one thing right: a strong relationship with Israel benefits both countries. But AIPAC is making a significant miscalculation by taking this to mean that any elected official who supports Israel automatically deserves the group’s money.

Support for Israel among members of Congress was not always a given. It is thanks in no small part to AIPAC’s efforts that the relationship is as strong as it is today.

But more extreme elements in both parties could just as easily turn on Israel, and on AIPAC. We are already seeing it happen on the progressive left, and recently, we’re seeing an isolationist shift on the right as well. Who’s to say that some of the 69 Members of Congress who voted against sending aid to Ukraine — including nine who were endorsed by AIPAC — won’t turn on Israel next?

Politicians came to AIPAC’s Policy Conference and vote for pro-Israel legislation not because the group is “all about the Benjamins,” as some have cynically claimed, but because there is broad public support for a strong U.S.-Israel relationship based on shared democratic values.

By forsaking those democratic values and funding those who work to destabilize this country, AIPAC is sacrificing long-term sustainability for short-term expediency.

I don’t want AIPAC to fail — I want it to do better. I have attended or spoken at AIPAC conferences and events regularly since I was a student at NYU. I went on an educational trip to Israel with AIPAC in early 2015, making friends from very different backgrounds and political affiliations. And as a journalist, I’ve relished the annual opportunity to reconnect with colleagues from Israel and across the U.S. at the group’s conference, and appreciated that panels often featured speakers who were critical of Israel.

I respected — аnd felt respected in — AIPAC’s “broad tent.” But I cannot support AIPAC’s decision to endorse candidates that undermine the strength of the only country I’ve ever called home.

I’m not alone. I’ve spoken at length with current and former AIPAC employees, as well as former donors who supported AIPAC for decades, who are tremendously disappointed by the group’s recent decisions. Tom Dine, who served as AIPAC’s executive director from 1980 to 1993, told Haaretz that if the group’s money “goes to antidemocratic people who believe the last election was a fraud and they support the January 6 insurrection – no sir, I would not give them a dime.”

AIPAC’s base will shrink if its members feel the group has forsaken them. And if the 37 election-deniers endorsed by AIPAC have their way, America will become a much-diminished country as well, calling into question the very stability that makes a strong U.S.-Israel relationship possible.