I watched Dnipro’s Jews rebuild and thrive. I know they will triumph once again 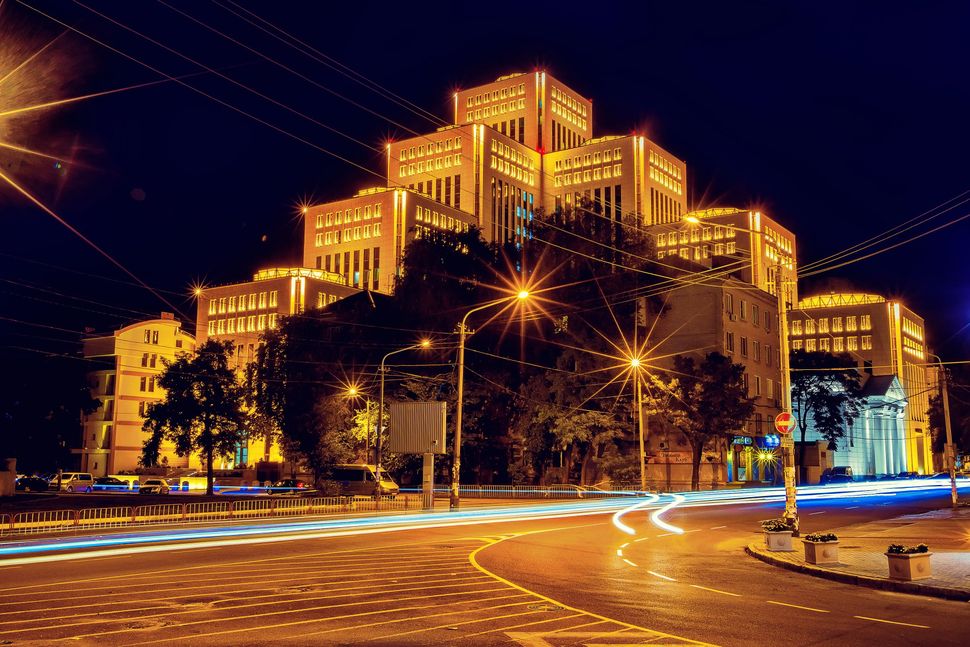 Dnipro, one of the largest cities in Ukraine, is surrounded by Russian fighting. As Putin’s invasion intensifies, the city is urging people to flee, and things are looking grim. But I know the resilience of this city firsthand: I watched as Jewish life was rebuilt after decades of suppression, and I know that they will rebuild once more.

As the Iron Curtain was coming down in the late 1980s, tens of thousands of Soviet Jews immigrated to Israel and the United States. But thousands of Jews in Ukraine chose to stay put and begin to rekindle their connection to Judaism for the first time in a generation. Under Soviet rule it was illegal to practice religion, so most Jews went ‘underground’ or ceased any practice at all.

Boston’s Jewish community chose to partner with the city of Dnepropetrovsk (now Dnipro) after a group of local leaders met with its young charismatic 25 year-old Chabad rabbi named Shmuel Kaminezki. Rabbi Kaminezki is one of the best community organizers I have ever seen in action, and his skills are proving invaluable now as he organizes his community now to welcome refugees fleeing from the south and east in Ukraine.

When Rabbi Kaminezki was first sent to Dnipro in 1990 by the Chabad movement, his beautiful, sophisticated wife Chany took one look and wanted to run away. Located about 300 miles south of Kyiv on the Dnipro River, Dnipro was a highly industrial city with close to a million people that had been “closed” because missiles and weapons were being built there.

Jewish life hardly existed in this city. Until the breakup of the Soviet Union, no one was allowed to come in or out. By 1990, there was one synagogue left; in its heyday, there had been over 40. The aging worshippers knew little Hebrew and nothing about the Torah or Jewish life. There were hardly enough men for a minyan.

But Rabbi Shmuel was determined to find the “hidden” Jews, and he did. In their very first outreach attempt, Shmuel and Chany hosted a reception on a Friday evening in the cafe of the very Soviet-like Hotel Dnepropetrovsk, hoping a few dozen Jews would come. Over 500 people showed up.

Rabbi Kaminezki followed the unwritten guide to building Jewish communities that our rabbis and leaders have followed for thousands of years. The couple first built a synagogue for prayer, then a Hebrew school and programs to care for the most vulnerable residents.

They also revolutionized public health in their town: Women in Dnipro had unusually high rates of cancer yet no access to Pap smears, mammograms or doctors trained to treat women with dignity. When the Kaminezkis shared this with us, the local Jewish community in Boston organized the shipment of medical supplies and got a local Boston hospital to donate a couple of mammogram machines. We brought Boston doctors to train and teach local doctors in best practices, and we brought Dnipro doctors and technicians to Boston to observe in local hospitals.

We created not only a Women’s Health Clinic within a Municipal Hospital, but we also established a pediatric primary care clinic and got Merck to donate Hepatitis vaccines, which were not previously available in Ukraine and later became part of the public health protocol for the entire country and prevented thousands of people from getting sick.

Aliza Shenhar, Israel’s former ambassador to Russia in the mid-1990s, presciently said: “Jews are going to stay. They are going to create their own communities. It’s not the father or grandfather who is teaching the children about Judaism, it’s the children who join the kindergarten who are teaching their grandparents.”

Slowly, slowly, the community emerged from the dark days of Soviet control and began to thrive. Today, as a donor said to me during one of our many trips, “It is cool to be Jewish in Dnepropetrovsk.”

The vibrant community continued to grow. The former “Golden Rose Synagogue” was restored to its former grandeur in 1999, a gorgeous modern synagogue that seats 1,000 people and is usually full on Shabbat and holidays — including this Purim, in the midst of the war. I was there for its dedication when President Kuchma of Ukraine donned a kippah for the ceremony and the Jewish choir serenaded him with Yiddish, Hebrew and Russian songs of pride for the independent country of Ukraine and its newly found freedom for Jews.

In 2012, the community completed the largest Jewish community complex in all of Europe called the “Menorah Center,” which includes a hotel, community center, medical clinic, a Jewish museum, a Holocaust Center and function rooms and offices for most of the local Jewish organizations.

Then came the unprovoked Russian war and the destruction we have all witnessed over the past month. Millions have fled their homes, including tens of thousands of Jews who thought they were finally safe in their homeland.

But Rabbi Kaminezki is still there in Dnipro, with his son, Jewish Community Director Zelig Brez and Brez’s own son. They continue to lead, helping both Jews and non-Jews trying to leave or shelter in place.

The day before Purim, I went with my rabbis from B’nai Jeshurun in New York City to the demonstration in front of the United States Mission to the United Nations, demanding an end to the war.

With tears in my eyes, I then returned home to watch the live Megillah reading from the synagogue in Dnipro, a packed synagogue in the middle of the war.

I hope that the war will end soon. But I know that Dnipro’s community will survive and thrive, no matter what happens next.

I watched Dnipro’s Jews rebuild and thrive. I know they will triumph once again